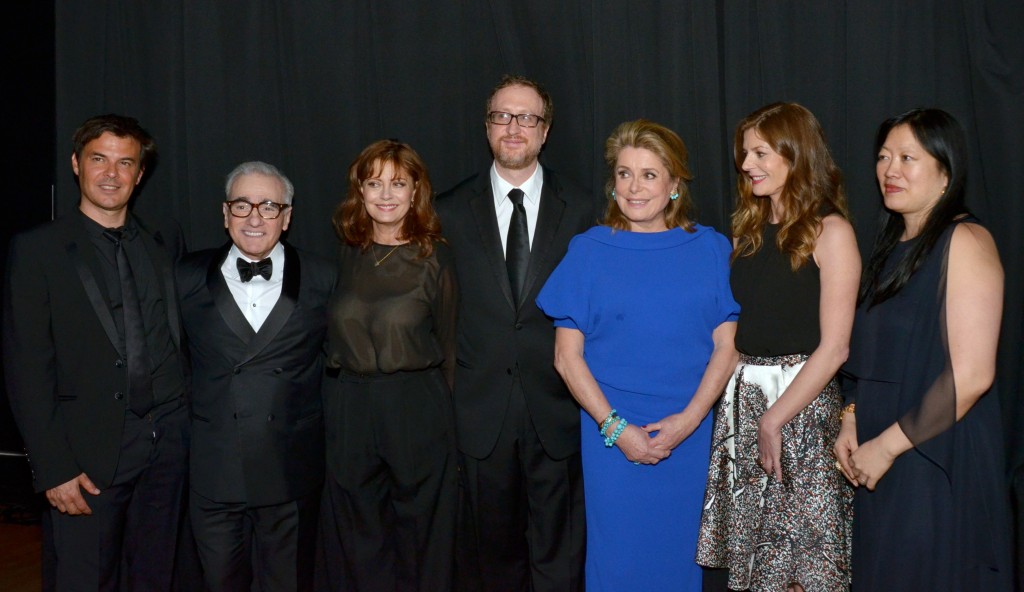 French actress Catherine Deneuve was celebrated at Lincoln Center as the Film Society honored he career in the movies, a career that spans five decades. Catherine Deneuve has appeared in more than 100 films since gaining wide acclaim for Jacques Demy’s The Umbrellas of Cherbourg (Les Parapluies de Cherbourg) in 1964 and Roamn Polanski’s Repulsion in 1965.

“Not only does she love to act,” emphasized her daughter Chiara Mastroinanni, “But she likes movies a lot.”

The 39th Chaplin Award Gala was held to support the Film Society and its programming. The annual event raised more than one million dollars to benefit the organization. Forty years ago tomorrow, the Film Society fundraiser welcomed Charlie Chaplin back to America and the Gala was later named in his honor. Chaplin’s grand daughter Kiera Chaplin was at Lincoln Center to mark the occasion.

“For me, Catherine Deneuve is French cinema. They are one in the same,” proclaimed Martin Scorsese onstage at Alice Tully Hall before presenting the Chaplin Award trophy to the French actress. The previous Chaplin Award recipient said, “She was made for cinema and cinema seems to be made for her.”

Scorsese and others spoke of Deneuve’s bold, adventurous spirit on screen. She chooses challenging, unexpected roles – for example, consider her turn as a bisexual vampire in the 1983 movie The Hunger. Introducing the sensual scene from the film last night, her co-star in that film Susan Sarandon quipped, “I am probably the only presenter who has actually slept with Catherine Deneuve!”

Filmmakers James Gray and François Ozon were among the others who saluted Deneuve on stage at 39th Chaplin Award Gala. Ozon, who directed the actress in the musical 8 Women and the recent Potiche, said it was a bit odd to be speaking about his friend in a foreign langauge.

“Maybe the English will allow me to say things I don’t dare to say to you in French, Catherine,” Ozon began. “What is your secret? Do you have a secret? Should I share your secret?” he teased, “I think your secret is you keep your secret.”

“You are always there and, at the same time, someplace else,” Ozon continued and then, smiling, recalled a quote from Potiche co-star Gerard Depardieu who said, “Catherine Deneuve is the man I’ve always wanted to be.