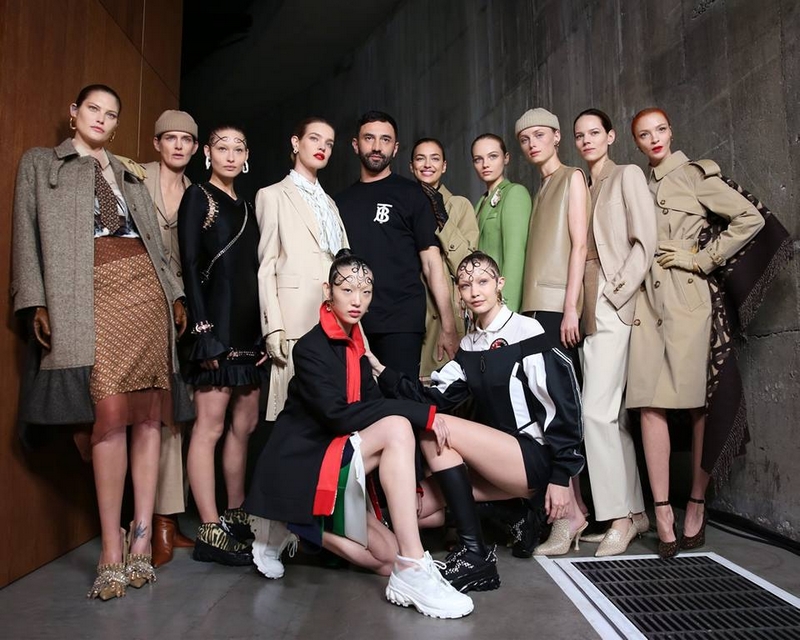 A Burberry show is about acting out what Britishness looks like, on the stage of London fashion week. France and Italy each have multiple powerhouse brands, but as the only British fashion brand listed on the FTSE100 index, Burberry stands for Britain. “To me Burberry isn’t just fashion, it’s everything about British life. It pretty much represents a country,” the designer Riccardo Tisci said backstage on Sunday after his second Burberry show.

Tisci, who was born in Italy and spent much of his career in France, is bringing to Burberry the theatrical bent that made his Givenchy shows appointment-viewing at Paris fashion week. Following Kingdom, his debut show in September, his second Burberry outing was named with an equally Shakespearean flourish as Tempest.

Arriving at Tate Modern, the audience found that those with gold tickets were divided on arrival from those with silver, and directed into two distinct spaces. One was plush, with guests seated in individual upholstered armchairs; the other raw and industrial with scaffolding and cube seating. As the lights went down, the theme music for News at Ten resounded through both spaces, followed by snippets of news reports of the early 1990s rave scene and the clash between the establishment and youth culture in the pre-Criminal Justice Act era.

Oversized puffer jackets in high-shine nylon were worn with check baseball caps and thick creeper-soled sneakers. With a soundtrack designed for the collection by MIA around classic 1990s tracks (1994’s Incredible by General Levy, for instance) the show brought rave culture faithfully back to life. There were oversized bumbags, slip dresses, track pants pooling around trainers. Backstage after the show, Tisci said that he had drawn on his memories of living in London “as a student, with no money” when he was 18. “I was very lucky to be here in the 90s. It was a great era – one of the best, I think. And I was here, and I was 18.” The concept for the two contrasting spaces, he said, was for one side to represent the British establishment, and the other side streetlife. “But both of them are Britain, both of them are part of the same culture, and Burberry lives in both of those worlds.”

A year into his second stint living in London, he believes that “British kids these days don’t have the freedom that we had back when I was a student here. It’s a difficult time, and it’s not easy for them to express themselves. They are scared.” He was encouraged “and amazed, impressed” by the school student strike on Friday. “They are fighting for their rights. That’s amazing. It’s their future.”

Like his first show, this was a collection in two parts. Just as his first season morphed from pleated skirts into punk, this collection’s Shane Meadows-esque section segued into silk scarves and tailoring. The chic house codes of check and trench have an added frisson, thanks to Tisci’s bad-bourgeoisie twist. A trench coat comes with a faux-fur lining, like a parka; a blouse is painted with oysters, each one with a pearl stitched on.

Successful Burberry shows connect with the audience by capturing something about British culture, and this one did that. The street-style clothes had an authenticity from being rooted in Tisci’s own experience, and lent excitement to the more sedate pieces. Christopher Bailey, Tisci’s predecessor at Burberry, made his Burberry sing by tapping into a vein of bookshoppish, cardigan-wearing bohemia hitherto unseen at a luxury brand. The new Burberry is very different, but underscored with the same sense of Britishness.