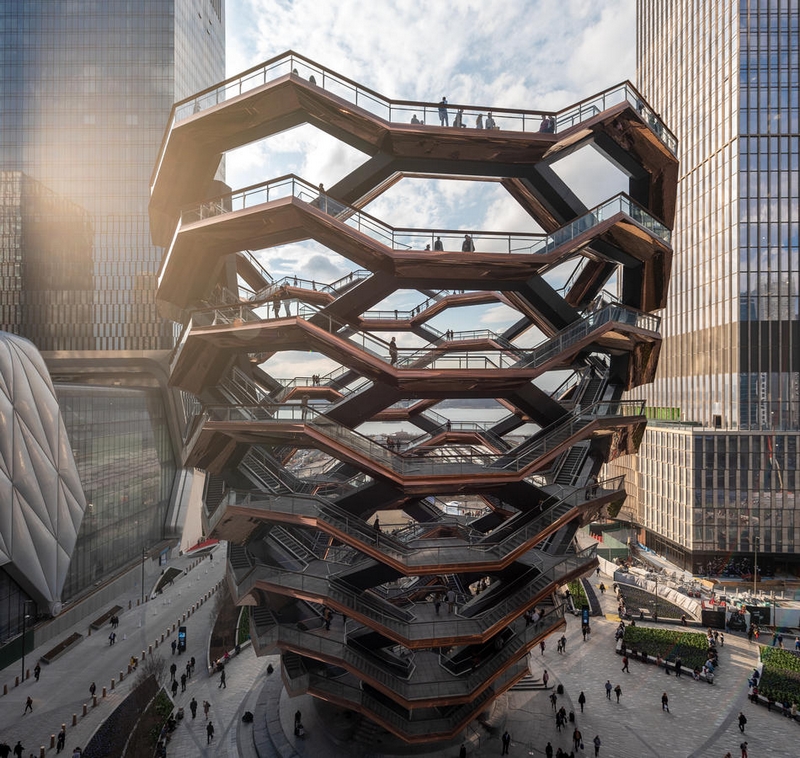 This article titled “‘We never thought it would happen’: Thomas Heatherwick’s $200m gamble” was written by Nadja Sayej, for theguardian.com on Tuesday 19th March 2019 06.00 UTC

Walking up the steps in leather shoes, a yellow scarf and a suit under his wool coat, the British designer Thomas Heatherwick is climbing up Vessel in New York City, his latest project at Hudson Yards, for the very first time with the public. Looking up, he says: “I’ve been itching for this moment.”

The 150ft-tall structure is a walkable feat boasting 2,500 steps on 159 interconnecting flights of stairs. With an elevator for those who can’t manage the mile-long walk to the top, this masterpiece offers a view of the Hudson river from the west side of Manhattan.

Related: Forget ‘machine for living in’ – Hudson Yards is a machine for investing in | Samuel Stein

Heatherwick takes a moment to pause on his walk to the top to explain it’s a dream come true. “A weird, extraordinary dream,” he says. It was part of the “inaugural walk”, where the first guests walking alongside the designer were given Olympic-sized medals to commemorate the historic opening last Thursday.

“It’s not an inanimate object,” explains the designer. “It’s thrilling that it isn’t finished until its able to be lifting up 1,700 people every day. Like Italian promenades, people can look up and down at each other to share this extraordinary experience.”

From the High Line, passersby can take pictures of the structure with their cellphones. Many in the months to come will ask: “What is that?” Indeed, it’s up for interpretation.

Some are calling it the honeycomb, others say it looks like a giant shawarma. This Instagrammable treasure, which has been referred to as a latticed StairMaster, has a bit of a spooky, futuristic vibe, like something out of a Star Wars film.

It also strikes a resemblance to a climbable MC Escher drawing, some even say its New York’s version of the Eiffel Tower.

Heatherwick shakes his head; its none of the above. It all started out as an idea when he was tapped by the developers for a project the size of Trafalgar Square in the middle of Manhattan. Naturally, it seemed too good to be true. The project could have easily fallen through. “You slightly don’t believe people,” he said. “We took it with a pinch of salt.”

Heatherwick first visited New York in 1991 and with Vessel, wanted to pay tribute to the dynamic nature of the city. Alongside this “Sim City on steroids” mega-complex that is Hudson Yards, New York’s largest development since the Rockefeller Center, featuring 16 skyscrapers, a shopping mall, luxury condos, a performance venue and 20 acres of public space, he wanted to create more than just a centerpiece.

“Putting ‘a thing in the middle’ wasn’t going to do justice to the dynamism of New York,” he said. “We got really interested in the public space, we’re fascinated in spaces that bring people together, that are free. New York is a pioneer of that.”

Bringing people together into a colossal space, much like Central Park or the High Line, he wanted to build on that heritage. Though, a stair-based public space project was risky. “We never thought it was going to happen,” he said.

It stands out in the bland skyline, as the Vessel is made in the millennial-friendly color of rose gold, a soft pink tone of iridescent copper. The color is famous for phone shells, a recent makeup trend and products that range from suitcases to the resurgence of rosé wine.

That was not intentional, however. Heatherwick chose it to break up the monotonous grey Manhattan skyline. “Buildings are grey, to have something warm, it could be a contrast and a compliment,” he said. “There’s a greyness of all buildings around the world, I felt this could afford to differentiate itself.”

Vessel shines like a polished car hood or perhaps iridescent nail polish across the concrete and glass surroundings. From afar, it looks like a geometric piece of public art, especially since there is no direct commercial gain for visiting the Vessel (guests can visit for nothing by securing an hourly ticket through the Hudson Yards website).

“I’m not an artist,” he declares. “My interest in how you make the world around you better, more meaningful ways in how to bring us together. We saw this project not as an artwork, but as an extension of three-dimensional piece of public space.”

But is he an artist? Perusing his portfolio, there is the case he could be an artist who uses public space and architecture for spectacle. Whether it’s his Olympic cauldron, the electrifying UK Pavilion at the Shanghai expo or the ribbon-like temple in Kagoshima, Japan, many of his designs look like sculpture more than habitable buildings.

But aesthetics seems to fall secondary for Heatherwick, who truly wants to bring people together in a public space, both horizontally and vertically. “You’ve still got the space around but you’re getting miles of space, as well,” he says pointing upward to the top of Vessel, while standing on its third floor. “You’re able to get both, there’s flexibility.”

But if Vessel is not an artwork, how can its astronomical cost be justified? It comes with a hefty price tag – this rose gold shawarma cost $200m.

The costs could be because it was made in Europe, its steel frame covering and polished steel cladding fabricated at Cimolai, a steel fabrication factory in Monfalcone, a small town in northern Italy. Transportation was another issue, as Vessel traveled in 16 different shipments by sea to arrive on Manhattan’s west docks over the course of 15 days.

As a one-of-a-kind masterpiece, Heatherwick said he and his team wanted to make something that doesn’t exist anywhere else in the world. It’s a site for freedom of spirit and personality, offering a “different kind of public experience that is free for everybody”, he explains.

The actual steps that make up Vessel, however, are a different story. Heatherwick explains they’re inspired by the ancient stepwells in north-east India, in particular the Chand Baori stepwell in Rajasthan, an eighth-century landmark which has 3,500 steps over 13 stories, one of the biggest of its kind in India.

“The repeating stairwells at Rajasthan become almost a textile,” said Heatherwick. “The stairs are not only for transport, they were built almost like a meditation.”

Here at Vessel, guests can look over at each other across a circular cone-shaped center. “You can have space that’s horizontal,” he said. “The way you look across at each other here is part of trying to give you a different experience.”

Similar to how the ancient Greek amphitheaters are still in use today for open-air film screenings and musical performances, there’s no telling what Vessel might bring in the future.

“The idea was that it’s a platform, one that we don’t know what will happen on it in the years and decades to come,” said Heatherwick. “You can do what you like here, you can have a discussion, wave at each other, it’s got no agenda. There is the space to see what you’re going to do.”

• This article was amended on 19 March 2019 to clarify that Thomas Heatherwick is a designer, not an architect, and that he designed the Olympic cauldron, not the Olympic Velodrome.