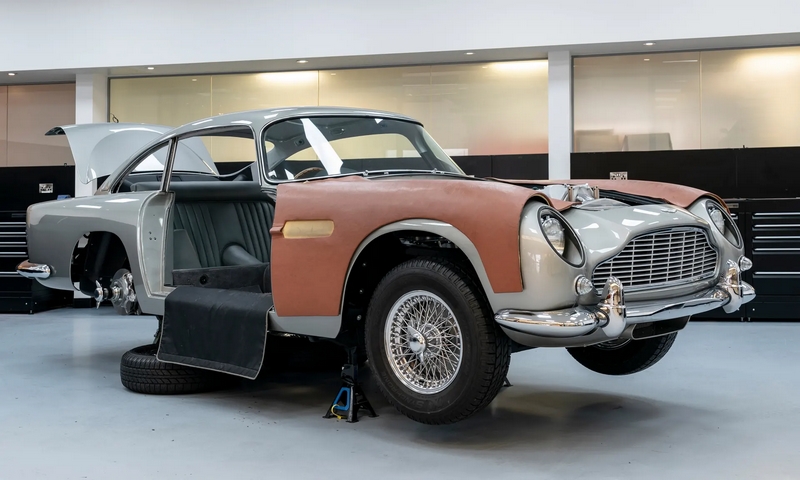 If they’re rich enough, James Bond fans will soon be able to live out their fantasies of driving 007’s Aston Martin DB5, the one featured in Goldfinger, complete with Q-branch gadgetry including revolving number plates, rear smokescreen and simulated twin machine guns concealed in the headlights.

The historic British carmaker announced on Tuesday that it is producing 25 new Goldfinger DB5s, which will also feature battering rams, retractable bulletproof glass and the ability to produce oil slicks to foil chasing vehicles.

Despite costing £2.75m (before tax), Aston Martin is understood to have taken orders for 20 of the cars, which are due to roll off the production line in Newport Pagnell in Buckinghamshire next year.

“There was a goal to include all the gadgets in the Goldfinger film,” an Aston Martin spokesman said. “And apart from the ejector seat, we’ve managed it.”

The top of the gear stick will still flip open to reveal the red button Sean Connery pressed to activate the ejector seat in the 1964 film. “Can you imagine the challenge of getting the ejector seat past health and safety?” the spokesman joked.

The cars are being made in partnership with the James Bond film producer, Eon Productions, and Chris Corbould, a special effects expert who created many of the effects for the Bond film franchise.

“The main challenge has been to recreate the gadgets from the film world and transfer them into a consumer product,” Corbould said. “We have licence in the film world to ‘cheat’ different aspects under controlled conditions. For instance, we might have four different cars to accommodate four different gadgets. We obviously don’t have that luxury on these DB5s as all the gadgets have to work in the same car all the time.”

Corbould said the biggest challenge in producing the car was making the faux-machine guns. “The guns appearing from the front lights were a particular challenge as, in the film world, we are able to use flammable gas mixtures combined with an ignition system to produce a flame and noise effect. Clearly, this is not practical in untrained hands, so we have devised a new system to achieve a realistic effect.”

In this model, gun barrels will emerge from the headlights but flash on and off rather than shoot bullets, and emit a “machine gun-like sound” when the driver pulls the “trigger”. The interior will feature a telephone in the driver’s side door, a faux radar-tracker screen, and a weapons tray hidden under the leather seats.

Paul Spires, president of Aston Martin Works, the historic factory in Buckinghamshire which produced the original DB5, said: “As work progresses on these remarkable cars, it’s both exciting and a little sobering to think that we are truly making history here. Creating 25 Goldfinger DB5 continuations and working with Eon Productions and special effects supervisor, Chris Corbould, is something truly unique and a real career highlight for everyone involved here at Aston Martin Works.”

All 25 cars will be produced in one colour – silver birch, like the original. The cars will feature 282-brake-horsepower engines (similar to the original) capable of going from 0-60mph in 7.1 seconds, with a top speed of 148mph.

However, because of the added extras, the cars will not be road-legal, and owners will have to be content with driving them on private grounds of their estates or on racing circuits.

Aston Martin declined to reveal to whom the first DB5 would be delivered, but a spokesman confirmed it was a very rich buyer who is a lifelong fan of both James Bond and Aston Martin. “We’ve allocated most of them, to all sorts of people – Aston fans and James Bond fans,” a spokesman said. “It’s the ultimate Corgi toy, isn’t it?”