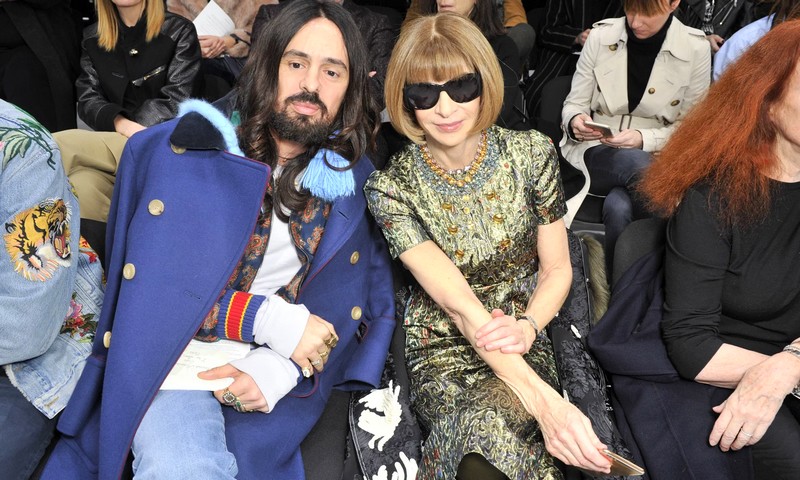 This article titled “Balenciaga and Céline catwalk shows impress at Paris fashion week” was written by Lauren Cochrane, for The Guardian on Sunday 6th March 2016 16.27 UTC

Super Sunday is a familiar concept in football, but it could also be applied to fashion this weekend. Paris fashion week boasted two agenda-setting shows to define a season – Balenciaga and Céline.

First up was Balenciaga on Sunday and the debut collection from its new artistic director, Demna Gvasalia. The Georgian-born designer is fashion’s current cult figure, as the lead designer of Vetements, the label making waves with disrupted streetwear – hoodies with overlong sleeves, shirts cut back to front. The question here was how a design sensibility that saw sweatshirts with the slogan “You fuck’n asshole” at the Vetements show on Thursday would transfer to an almost 100-year-old house that once clothed socialites and heiresses in ladylike elegance.

The answer came in a square room covered with white acoustic insulation, like that in a recording studio, in the basement of an anonymous white building. The expectant audience included Gucci designer Alessandro Michele and model Stella Tennant.

The first outfit was a checked skirt suit with exaggerated hips and shoulders up around the model’s neck. This was a very Gvasalia nod to Cristóbal Balenciaga’s signature midcentury sculptural shapes – making them slightly weird but still recognisable. It wasn’t remotely retro.

This was followed by cagoule-style jackets with Balenciaga written on the back of the hood, and oversize striped shoppers – both surefire hits with the social media generation. Models wore knee-length cord skirts, ski pants and over the knee PVC boots. Oversize bad-taste jumpers and floral patchwork dresses worn with candy-striped tights recalled more recent Balenciaga history, and the collections of Nicolas Ghesquière.

While the designs here were sometimes wilfully twisted – a trench with extra padding around the hips, or an off-the-shoulder coat – they all had some basis in the reality of what women wear now. There was an everydayness that felt modern. It was this factor that made for such a blisteringly desirable debut collection.

In an interview with Women’s Wear Daily earlier this year, Gvasalia said he has a “very product-oriented approach creatively”, industry speak for a designer who makes clothes rather than concepts. Backstage, the designer reiterated this idea, saying he wanted to make “relatable garments”. He was keen to emphasise the Balenciaga heritage. “I used his way of looking at things 360 degrees,” he said. “It is important to know the past in order to build the future.”

CEO Isabelle Guichot called Gvasalia “someone capable of reshuffling the cards” when he was appointed in October. This collection confirmed she was right.

If Gvasalia was a tough act to follow, Céline was always going to pull the crowds. It is a brand that has had the fashion industry in raptures since Phoebe Philo became creative director in 2008. This collection had elements familiar to her significant fanbase – there were tunics over wide bootleg trousers, oversize sweaters, tied trench coats and bags clutched in models’ hands. There was a functionality that chimed with Gvasalia’s – with a muted colour palette, flat shoes and party dresses with pockets worn over polo necks and leggings, eveningwear for those who feel the cold.

If that sounds straightforward, Philo is frequently less than crystal clear in her explanation of a collection. “It’s about possibilities,” she said, adding that there is “always a tactile process [when designing], but this time it showed more”. Wearing a dress over wide-legged white trousers, what she said may have been somewhat opaque but she did embody the simple chicness of her brand.

This is the first Céline show since rumours about the potential exit of Philo were quashed in February. A memo signed by Philo and Céline CEO Marco Gobbetti was leaked to the media, and states that the designer and brand were “more motivated than ever to their partnership”. This was a relief for the front row, who are more often than not clad in Philo’s clothes. Next season, Gvasalia’s Balenciaga designs will no doubt be spotted there too.