The Hero Dog Awards were created to celebrate the powerful relationship between dogs and people and recognize extraordinary acts of heroism performed by ordinary dogs. 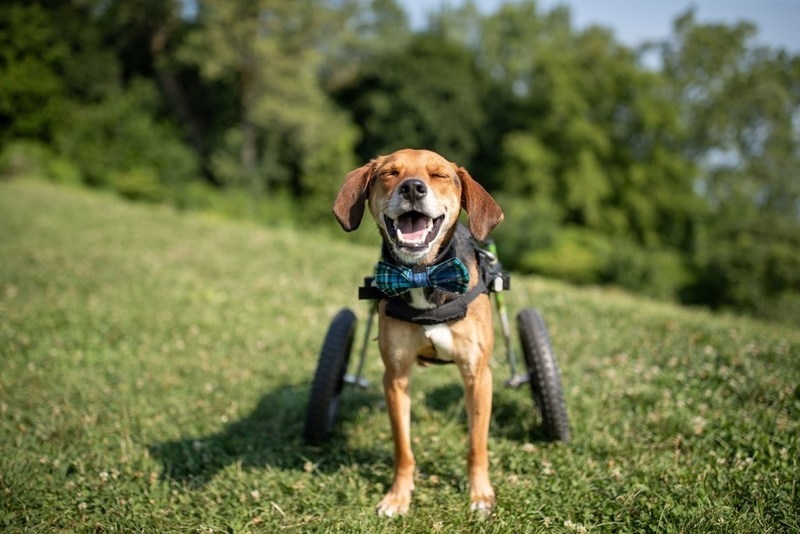 Based on more than a million votes by the American public and the deliberations of a VIP panel of dog experts and celebrity animal lovers, Boone, a four-year-old hound mix from Hookstown, Pennsylvania, who lost two legs but not hope, has been named the country’s most heroic canine. Boone, who survived heartbreaking cruelty as a puppy, bested more than 400 other competitors across the country and captured the top title at the American Humane Hero Dog Awards gala last night.

The Hero Dog Awards were held at the Eau Palm Beach Resort and were sponsored by the internationally renowned philanthropist Lois Pope.

“The American Humane Hero Dog Awards were created to honor some of the world’s most extraordinary heroes,” said Dr. Robin Ganzert, president and CEO of American Humane, the country’s first national humane organization. “These courageous canines have gone above and beyond the call of duty, saving lives on the battlefield, comforting the ill and aged, and reminding us of the powerful, age-old bond between animals and people. All seven category winners exemplify what it means to be a hero, and we hope that their stories will inspire people to value our animal friends and recognize how much they do for us every day.” 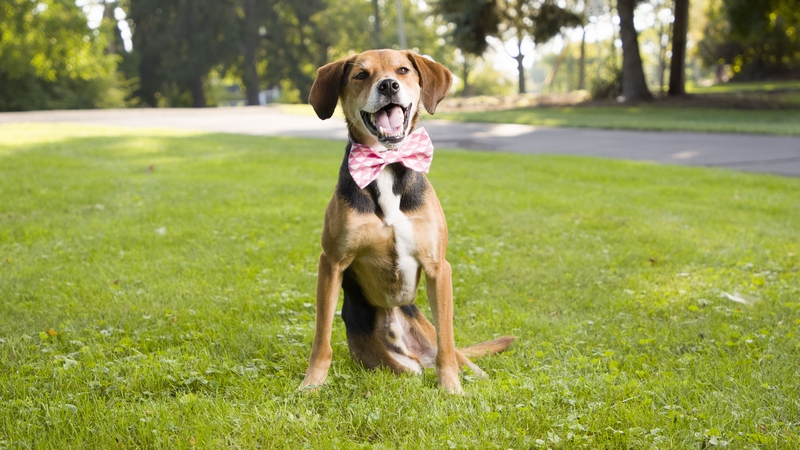 Boone overcame unimaginable cruelty as a puppy, which resulted in the loss of his back legs, when he was adopted by a family with a soft spot for special needs pets. Boone’s family had him fitted with a wheelchair to improve his mobility, and he has been a dog on a mission ever since – a mission to spread his joy to others with his infectious smile and story of resilience. Despite his challenges, Boone’s sweet nature and enthusiasm for life make him a perfect fit for his new profession as a therapy dog. Children light up when he enters the room. Boone is also an ambassador for the nonprofit Joey’s P.A.W. (Prosthetics and Wheels), which has provided mobility devices to more than 700 dogs in need in Pittsburgh, across the country, and even internationally. Boone and Joey’s P.A.W. hope to improve outcomes for dogs with mobility issues in shelters and rescues across the country, as well as perceptions about their adoptability.

For his good works, Boone first won the top title in his individual category, becoming the country’s Therapy Hero Dog of the Year, and then, in the last round, won the American Humane Hero Dog Awards’ top title of 2021’s American Hero Dog.

Here are the official nominations of the other winners, as told by their handlers and owners: 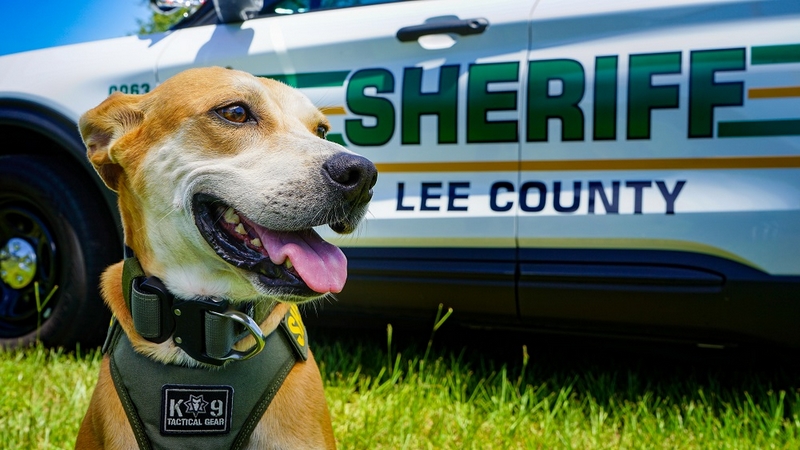 Deputy Chance (Cape Coral, Florida) – Chance was a victim of animal abuse in Lee County, Florida. The Lee County Sheriff’s Office investigated the animal cruelty case and used forensics evidence to identify a suspect and subsequently get a conviction. Chance was adopted by Lieutenant Castellon and deputized by Sheriff Carmine Marceno. Deputy Chance is the spokesdog for the public affairs unit at the Sheriff’s Office. Deputy Chance was also named a Good Will Ambassador by the county commissioners. He regularly visits schools, hospitals, and community events. He promotes good will, has become an advocate against animal cruelty and helps promote adoption of shelter pets. Deputy Chance is the face of the Deputy Dogs Person Patrol program in Lee County, Florida. 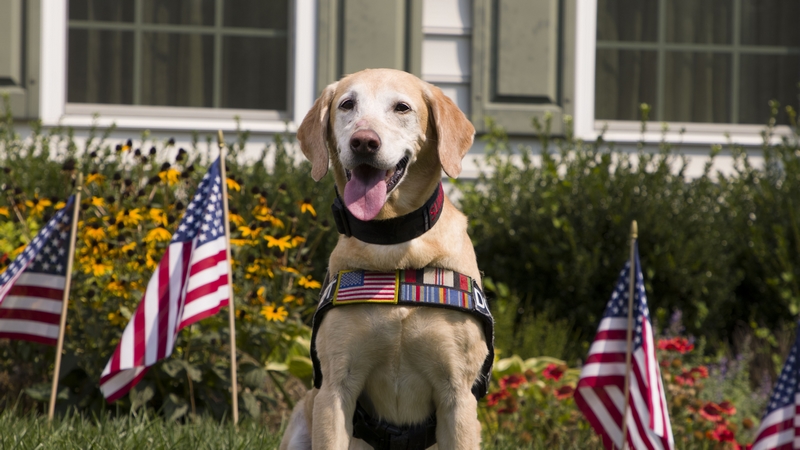 2021 Military Hero Dog of the Year

SSG Summer (Mt. Airy, Maryland) – Staff Sergeant Summer is a 10-year-old female Labrador. Summer retired from the Marines Corps in 2013 as a Military Working Dog and proud war dog. She most recently retired as a Police Explosive Detection Dog after serving proudly for seven years. While deployed, she conducted a substantial number of routine patrols, searching for and positively identifying countless weapons caches and improvised explosive devices, swept and cleared routes for the troops and was involved in numerous fire fights with insurgents. Summer put her life on the line to protect, defend and save the lives of countless troops. As a result of these exposures in war zone environments and other traumatic events that Summer experienced in Iraq and Afghanistan, she was diagnosed with canine PTSD in December 2015. She copes with this condition daily. For her heroic, extraordinary valor and service to our country, Staff Sergeant Summer received the PDSA Commendation Award in July 2017 and the Lois Pope K9 Medal of Courage on Capitol Hill the following year. In retirement, SSG Summer continues to serve her country and fellow veterans by visiting them at the Charlotte Hall Veterans Home, located in St. Mary’s County, Maryland. The veterans who reside at that location truly admire her story of service and enjoy the love and pats as she walks through their rooms. 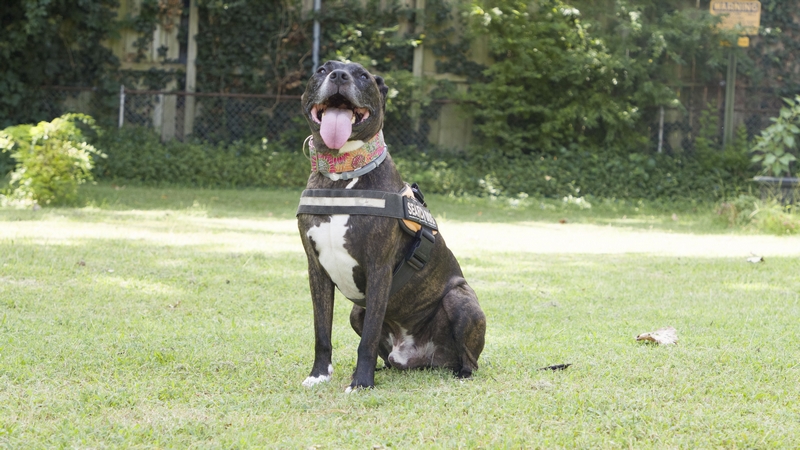 2021 Search and Rescue Hero Dog of the Year

Little Man (Oklahoma City, Oklahoma) – All dogs are heroes, but Little Man takes it to a new level. NASAR-certified, he ranges off-leash for a specific human scent, articles or human remains. His joyous spirit and amazing work ethic have won him friends with law enforcement and SAR personnel in multiple states. But his story did not begin well. In 2013, a monster tornado ground the city of Moore, Oklahoma into rubble. The carnage was terrible. Molly Gibb, a professional SAR volunteer, worked with animal control and the American Humane Rescue team to meet the animal response needs. Five days after the storm, a tiny pit bull puppy was found buried. It was a miracle that he survived. He came to be known as Little Man. When he went unclaimed, Molly adopted him as she thought he had something special.

His intelligence, drive, curiosity, athleticism and upbeat nature made him a great candidate for search and rescue work. Little Man’s trainability, determination and affinity for people epitomizes just what can make many pit bulls great working dogs. He balances SAR training and deploying with participating in youth programs and serving as a neutral helper dog for shelter and adjudicated dogs in need. For him, searching is a great game, but in reality it can mean life or death. In 2020, he found a missing traumatized assault victim alive, bringing his life full circle. He has grown from tornado survivor to hero and has fully blossomed in public service, eagerly paying it forward by helping families and communities in crisis and graciously welcoming their love in return. 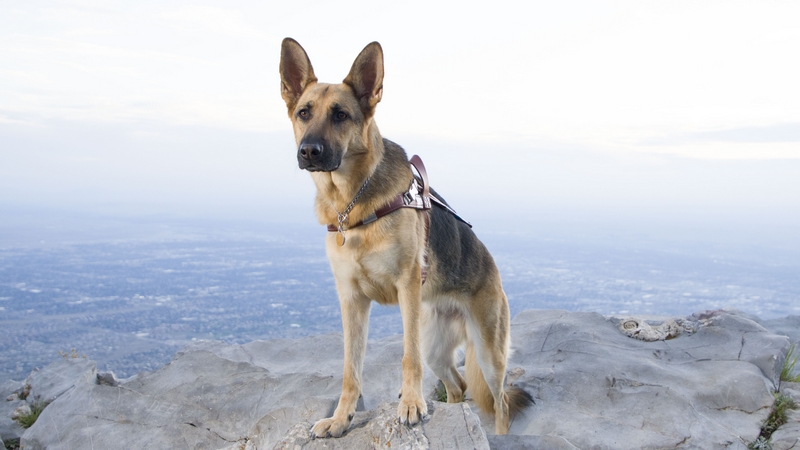 Henna- 2021 Guide/Hearing Hero Dog of the Year; @The American Humane

2021 Guide/Hearing Hero Dog of the Year

Henna (Albuquerque, New Mexico)
“I am deaf and legally blind. Henna, my amazing guide dog, has given me the freedom of travel and saves my life on a daily basis. She is an extension of my body, becoming my eyes and ears. Last year, while simply crossing a familiar intersection, I was nearly crushed by the trailer of an 18-wheeler. It was a sunny warm spring day and I was waiting with Henna to cross the road. After a few moments, Henna’s ear flick indicated it was our turn. I gave the forward command and we started crossing towards the opposite corner. We had reached the midway point when Henna suddenly backed up. She reversed so fast I knew instantly something was wrong. Her movement was strong, sure and deliberate, while ensuring I was not going to trip or fall. When Henna slowed enough for me to take in my surroundings, I could see a large truck was now completing a left turn in front of us. No more than five feet away, the trailer wheels rumbled where Henna and I were only moments ago. After the trailer passed, she guided me safely across to the opposite curb without me prompting her. Despite me being in shock from almost being hit, Henna continued to perform her job perfectly. To this day, I can still see the trailer’s reflective strips in front of me and know that this was only one of many times she saved my life, while allowing me freedom. She continues to confidently guide me and acts as if it had never happened. I can almost see in her face and hear in her voice, “I got you, mom! Just follow me.” Sobee-2021 Service Hero Dog of the Year; @The American Humane

Sobee (Holt’s Summit, Missouri) – Once living hopelessly and suffering from human neglect with only two days left on the euthanasia list in an overcrowded shelter in Georgia, Sobee is now living a purposeful life with her combat veteran in Missouri. Sobee was rescued in 2016 by K9s on the Front Line and began her training as a service dog for a veteran seeking rescue to complete the daily tasks that each of us commonly engage. Jason Howe, a disabled combat veteran in Missouri, was secretly fighting the internal demons of PTSD and addiction after returning from two deployments in the U.S. Navy. While Jason spiraled into a dark place, he found himself in Maine, talking with a high school friend who introduced him to Dr. Hagen of K9s on the Front Line, a non-profit organization that rescues/trains service dogs for combat veterans. Sobee and Jason were paired together in 2016 and an instant bond was built between them. Jason began to feel the weight lift off his chest and he now had a sense of responsibility with Sobee by his side. Jason would put two feet on the ground each day instead of covering up in bed and self-medicating. Sobee is trained to assist Jason with panic attacks and watch over Jason when he is in public places. Sobee has also been the reason Jason found himself assisting and training service dogs for K9s on the Front Line’s Missouri chapter. The bonded pair are paying it forward by successfully training service dogs for veterans. 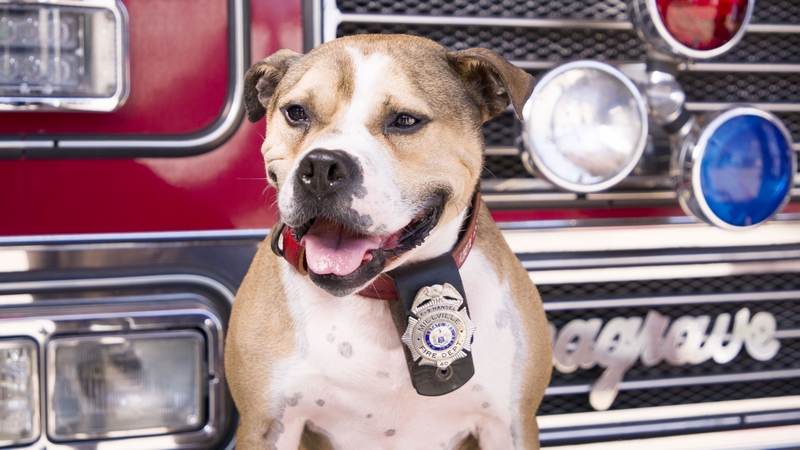 2021 Law Enforcement and Detection Hero Dog of the Year

K-9 Hansel (Millville, New Jersey) – K-9 Hansel was only 7 weeks old when he was seized from an alleged dog-fighting ring in Ontario, Canada. He never fought. He along with 20 other pit bulls were slated for euthanasia. After a 2-year-long battle with the Ontario courts, Hansel was then transferred to the Dogs Playing for Life shelter down in Florida. Throw Away Dogs project was then notified of a potential working dog candidate for their program. Hansel was accepted into the program for more training. The Millville Fire Department was looking for an accelerant detection K-9 and Hansel was a perfect fit. Hansel and I went through 16 weeks of scent training and we were later certified as an arson detection team. I believe that Hansel is the first pit bull certified in accelerant detection in the United States. Hansel can recognize 14 different ignitable liquid odors. He really is the best partner and a rock star. He was also honored as one of the dogs of the year featured on the CW network. If you Google K-9 Hansel you can see all the obstacles he has overcome and learn about his story in more detail. 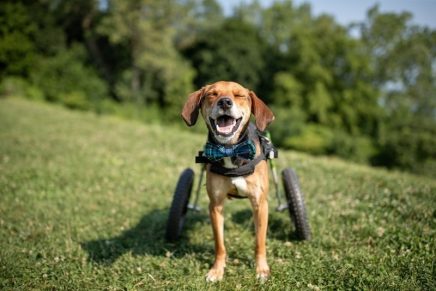 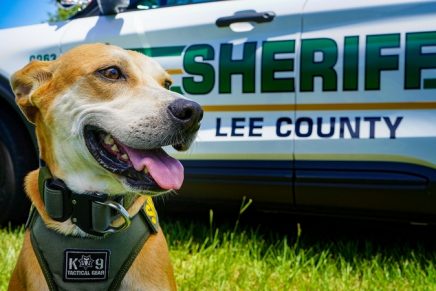 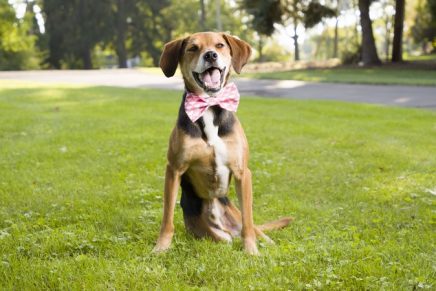 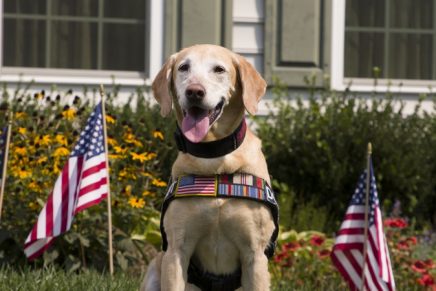 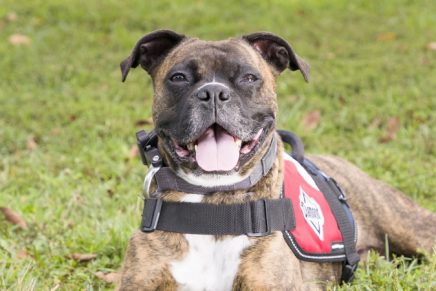 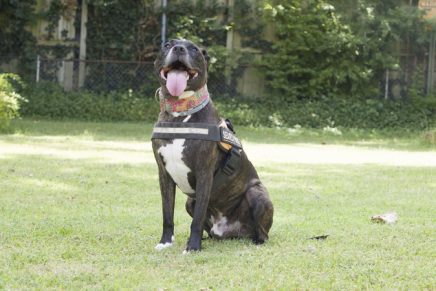 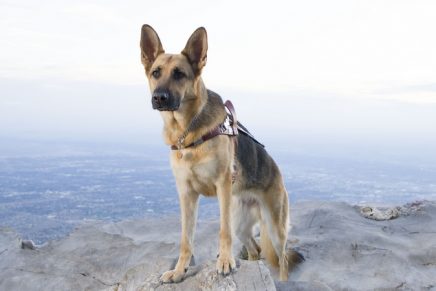 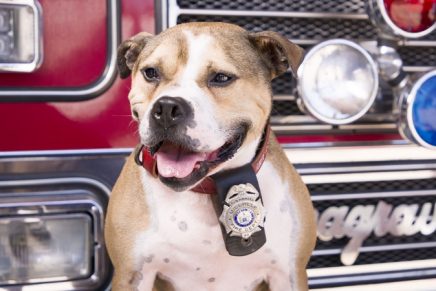