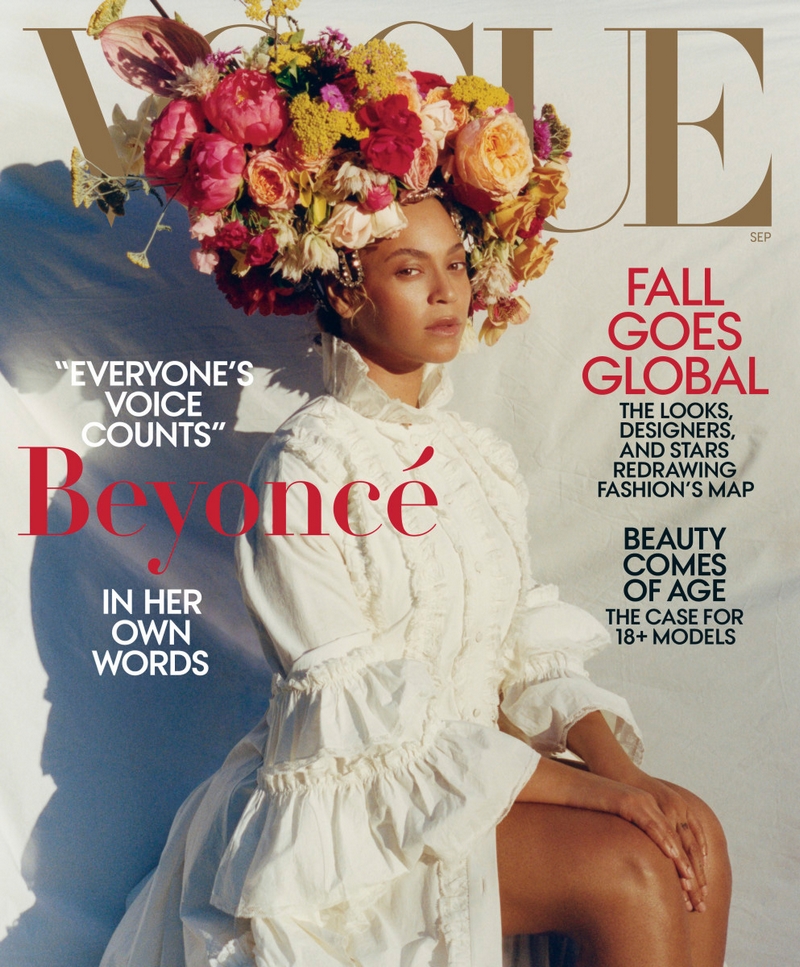 The catwalk pieces that matter most

Before you even think about shopping next season, memorise Givenchy’s look No 9 : an oversized zebra-print turtle-neck sweater worn over a high-shine black pencil skirt with monochrome court shoes. This photo appears twice in the first three pages of Vogue’s trend report, so if you keep that front of mind you can’t go far wrong. The press samples of Victoria Beckham’s leopard-print coat must have racked up a lot of air miles, too.

The affordable buys to snap up

“The dress continutes to reign as fashion’s universal go-to, making a stripy maxi or midi design your one-stop autumn update,” says Vogue, tipping Boden’s £130 Alba midi dress in mulled-wine stripes. Red also tips the long, printed dress, featuring a Ganni style (a maxi shirt dress in the same print is already on sale). All the September issues agree that the “heritage coat” – conker-brown or charcoal grey; checked, tweedy, trenchy, or all three – is an essential this season. Harper’s Bazaar’s No 1 of 10-things-to-love-about-the-season is the Saint Laurent tweed coat, which is absolutely gorgeous, but is also £12,995. However, Vogue has check trench coats at Arket (£250) and Warehouse (£99, on sale 8 October). A honey-toned corduroy blazer, £99 from Marks & Spencer, features in Red.

The shoes of the season

Back in March, long before she was “royal wedding dress designer Clare Waight Keller”, the Givenchy designer had all of Paris fashion week swooning over what she called the “police boot” backstage after her show: a slick, zippered, cone-heeled 80s take on the cowboy-boot shape. At £1,150, these turn up in white in Vogue, and in beige in Bazaar, and are sure to spawn some high-street imitators. Jimmy Choo’s £850 Leanne booties – white ankle-strap court shoes with an ankle-sock puff of polka dot lace – are another 80s glamazon trophy piece. You can get a similar vibe via the £89 zebra-stripe high-cut court shoes from And/Or at John Lewis, which appear in Red, and go on sale this Friday.

How to wear your coat

I know, I know – after a record-breaking heatwave you can barely recall what a jacket is, let alone a coat, so this feels way too theoretical. Nonetheless, two important styling points to bookmark. No 1: you will want to wear your coat with a belt. In a double-page spread of coats featured in Vogue, more than half come with incorporated belts; in Bazaar, camel coats by Versace and Alberta Ferretti are cinched by tan leather belts. No 2: the rich-girl just-stepped-out-of-a-limo, shoulder-robing thing is totally over. (Too Melania.) Wear your coat straight-up, sleeves and all.

What to wear to work

The skirt suit is cooler than the trousersuit for the first time in years. Chanel tweed two-pieces feature in Vogue and Bazaar; Vogue also has a Marc Jacobs skirt suit while Bazaar has skirt suits by Dior and Gucci. If you stick to trousers, wear them wide-legged with a ladylike blouse and chunky trainers. “Embrace the neck-tie blouse and forgo structured blazers for relaxed tailoring,” advises Vogue.

What to wear for maximum fashion points

“Have fun clashing tartan with florals and leopard print, as seen at Michael Kors,” says Red.

The year to namecheck

It’s a dead heat, this, between the Dior saddle bag and a baby. The Dior saddle bag probably works out cheaper: it is around £2,000 new, but if you move fast you can snap up a 90s vintage one for a tenth of that on resale sites such as Vestiaire Collective.

Slick Woods shows off her bump on the cover of Elle; Cameron Russell holds her baby son Asa on the cover of Bazaar; while Kanye West holds North and Saint inside. In her own mini power move, North West “wears her own clothes”, according to the credits, and has a plaster on her knee.

What it means for the ‘gram

Smiling (and even smizing) is over, as is the winsome chin-tuck-into-knitwear. Direct eye-contact with a borderline-challenging, did-you-spill-my-pint-mate vibe is de rigeur for models in the September issues. Extra points for holding your handbag as a “wristlet”, with the chain strap wound tightly around your fist, which suggests you might be about to launch it as a weapon.

No one has landed her in their mag as yet, but her influence is behind everywhere’s extra-high Givenchy count, the “modern knot” as Red’s hairstyle of the season, and Princesses Eugenie and Beatrice getting a major shoot in Vogue. In Elle, Stella McCartney talks about landing those royal wedding commissions: “Obviously, I am a British designer, but I think being a woman and being a women’s woman played a part. They [Meghan, Amal, Oprah] are all women’s women. It’s a big deal.”

Word of the season

“Brobdingnagian” makes it into Vogue as the hot new word for oversized. Coined by Swift in Gulliver’s travels, it now applies to voluminous jackets and ultra-wide trousers. Elle champions “sustainability” as the season’s buzzword, with a special issue printed on recycled paper. Designer Kevin Germanier, whose glittery cycling shorts are featured in Elle, says: “I’m trying to challenge the aesthetic of sustainability, to educate people. If someone sees a nice dress, they are interested, and then I can say: ‘Did you know this is made from waste?’”