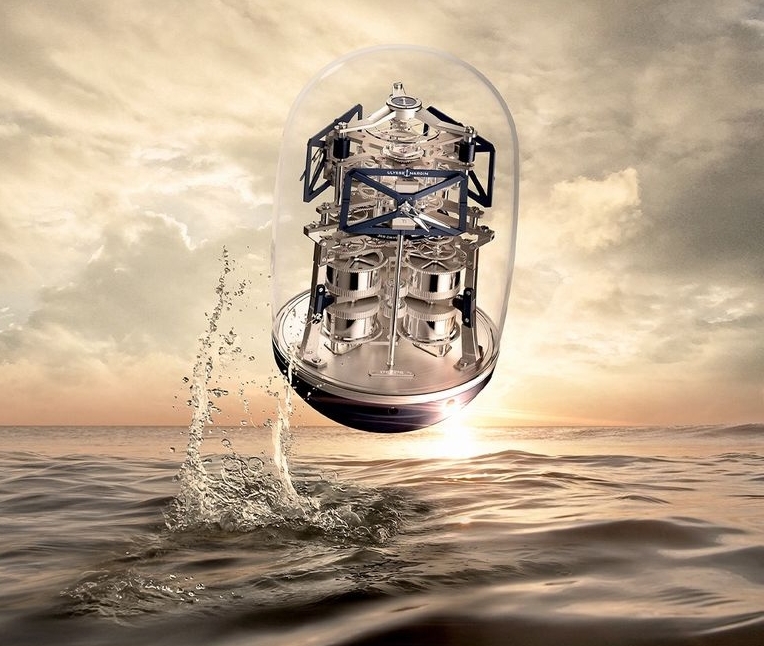 Hanging in-between elements, the new Ulysse Nardin’s UFO comes from both the future and the past, in a shape of an unidentified floating object.

The on-board chronometer is no simple timepiece but a voyage through clock-making’s history and a daring imagining of its future. To celebrate its 175th anniversary, Ulysse Nardin takes clockmaking into the realms of imagination by reinventing the chronometer. This UFO might be a table or desk clock, but it is so many other things besides. It’s a swinging mechanical depiction of the movement of the waves. It is a triple-timed zone amalgam of the past, present and future. Once again, Ulysse Nardin has launched something completely unexpected – a new addition to its cabinet of curiosities, inspired by innovation and exploration, the seas and the skies. This UFO contains all of Ulysse Nardin’s horological history in one single object, from the marine chronometers of the 19th and 20th centuries to the Freak in 2001, to the Blast in 2020. It is simply out of this world.

So how to celebrate the future of the brand, while staying true to the desire to make the best time-measuring tools, which was the challenge Ulysse Nardin set himself in 1846? 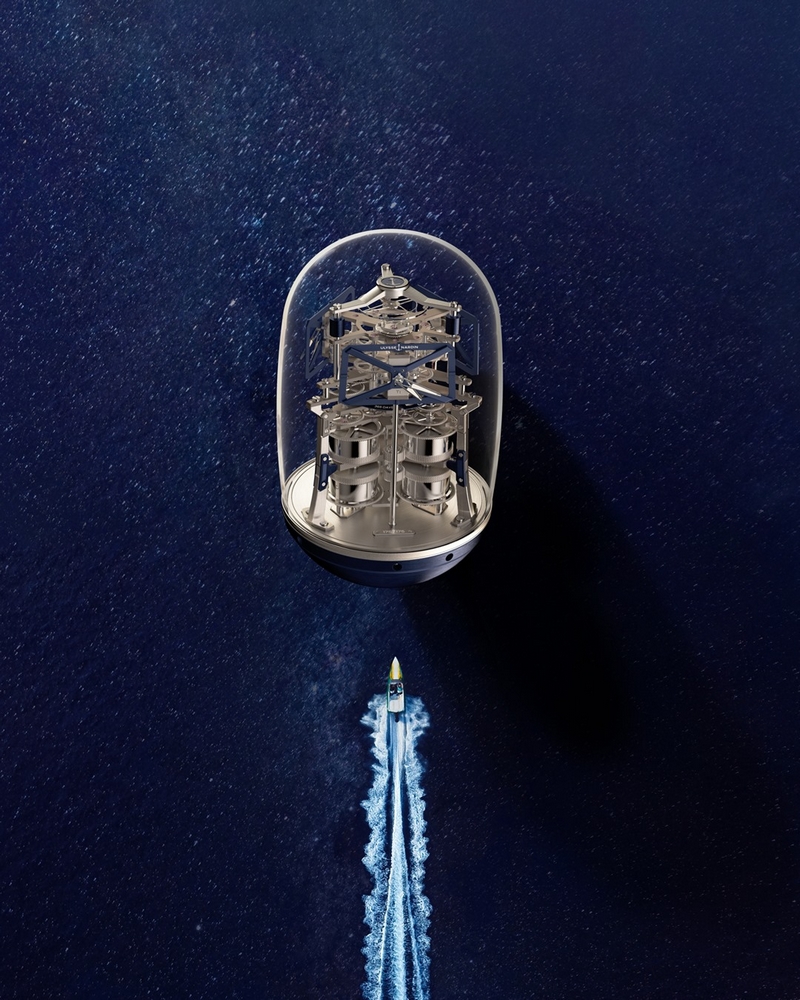 “Reissuing a watch from the past by reusing vintage codes was not part of our creative intentions for this anniversary object. On the contrary, we wanted to reverse the trend and make a leap forward of 175 years, rather than a leap backward. We always look ahead. We wondered what a marine chronometer designed in 2196 would be like,” explains Patrick Pruniaux, CEO of Ulysse Nardin.

With its 663 components, and triple-dialled time zones, the UFO is the futuristic interpretation of what Ulysse Nardin’s designers, engineers, and watchmakers think a marine chronometer should look like in 175 years’ time. This UFO has been designed to guide the explorers of the future, whichever seas they may sail.

Whereas marine chronometers were housed in wooden boxes and set on gimbles to counteract the effect of the ship’s
constant sway, Ulysse Nardin reverses this. Here it is the high-end object itself that makes waves when it is nudged gently.

Weighing 7.2kg, the UFO swings up to 60° from its axis – an amplitude of 120 degrees – and the engineers have
accurately calculated the center of the gravity/mass/inertia ratio, which allows UFO to swing neither too fast nor too slowly and without significantly affecting the operation of the balance.

It isn’t just the UFO’s movement that is inspired by the ocean, the architecture is too. The bell under which this incredible creation is housed suggests floating black and yellow cardinal buoys – objects that also provide inspiration for the X sitting in the spine of the table clock. From above, the construction of the UFO seems almost kaleidoscopic, with its emblem, the marine anchor, dominating the heart of the rosette. 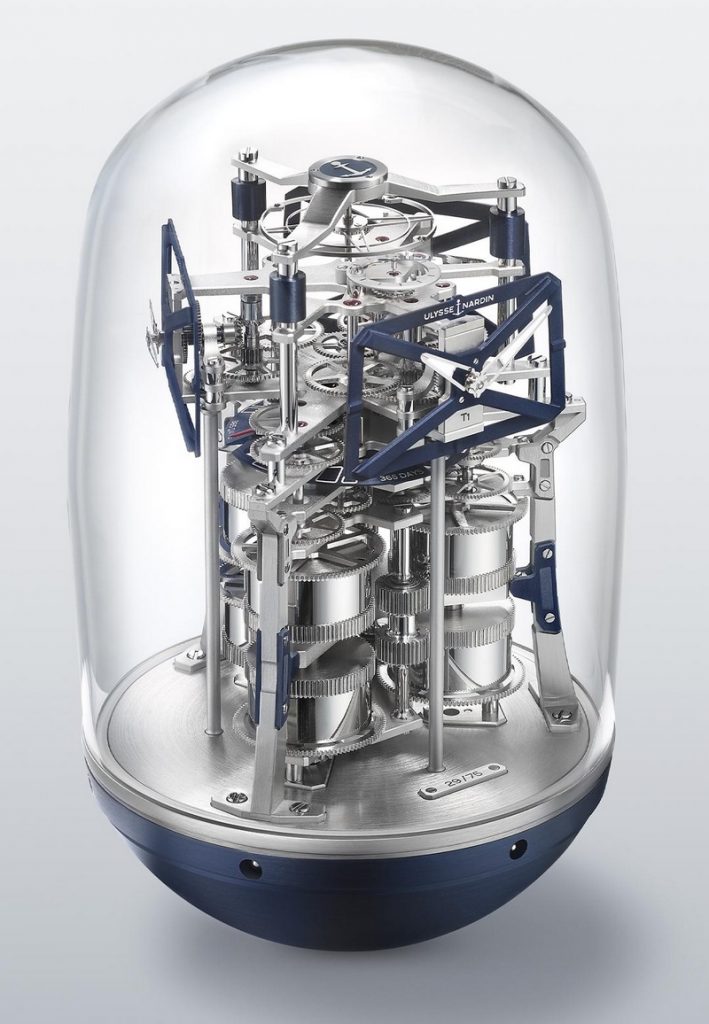 The ovoid glass bell has been created by Romain Montero, a 26-year-old artisan glass blower who works for Verre et
Quartz, a technical glass-blowing workshop located on the shores of Switzerland’s Lake Neuchâtel. He had the
responsibility for handcrafting for every one of the 75 numbered limited-edition UFO glass covers.

“The biggest challenge was the overall aesthetics of the glass tube. To get 50 spotless glass bells, I had to blow out three times the number, 150 bells. You need to blow gently, as if you want to make a soap bubble. Even so, the glass is imperfect at the base and is sensitive to micro-vibrations during blowing, but there is beauty in those imperfections and small flaws,” explains Montero.

To manufacture each 3mm-thick tube, it was necessary to stretch the glass when it was still hot, for more than 45
minutes, using only the naked eye, on a traditional glass-maker’s lathe at temperatures of up to 1,500 degrees. As it is heated the glass is transformed, becomes orange, red, white and morphs through all the hues of pink. The total process takes almost half a day of work: cutting of the glass, blowing, checking the blowing and the measurements, furnace annealing, cutting again, lamination, final and visual inspection, and then cleaning. 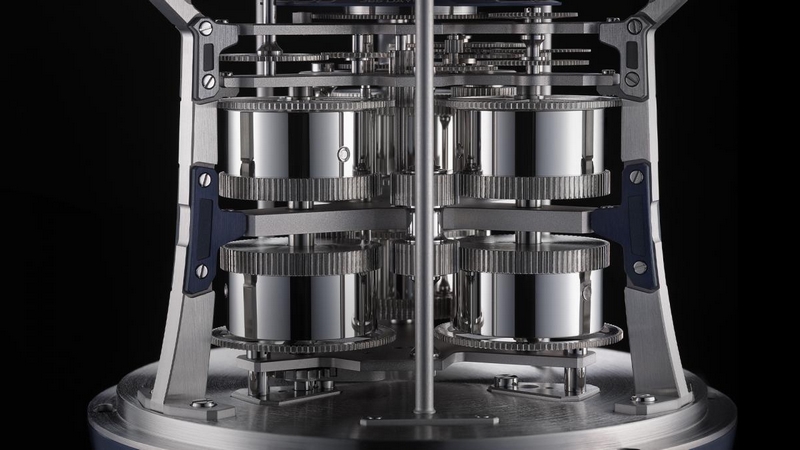 For this unique watchmaking project, Ulysse Nardin decided to collaborate with the celebrated clockmaker Maison L’Epée, who has been manufacturing traditional clocks since 1839 and is now famed for bringing the fantastical imaginings of MB&F’s CEO Max Busser to life.

Comprising 663 components, and with one year of power reserve supplied by its six extra-large barrels, and a balance wheel rim that reaches the spectacular diameter of 49 mm, UFO displays the time on three trapezoidal dials, which are so complex it takes 28 hours to manufacture just eight of them. Having three dials allows the owner to display three different time zones at once, seen from three different angles. 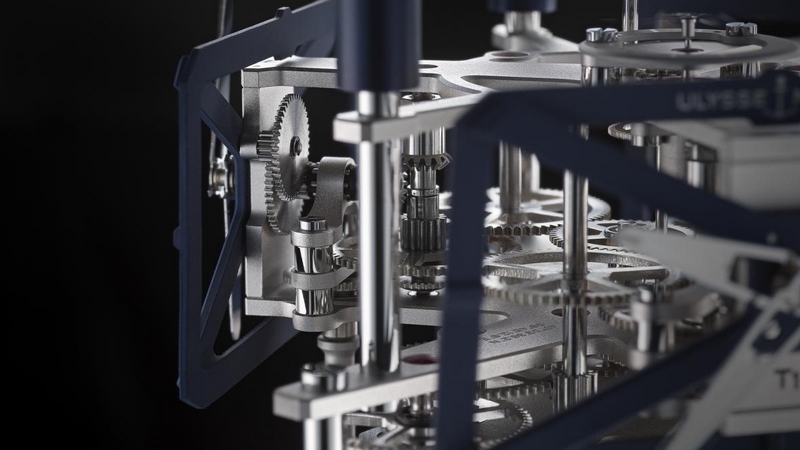 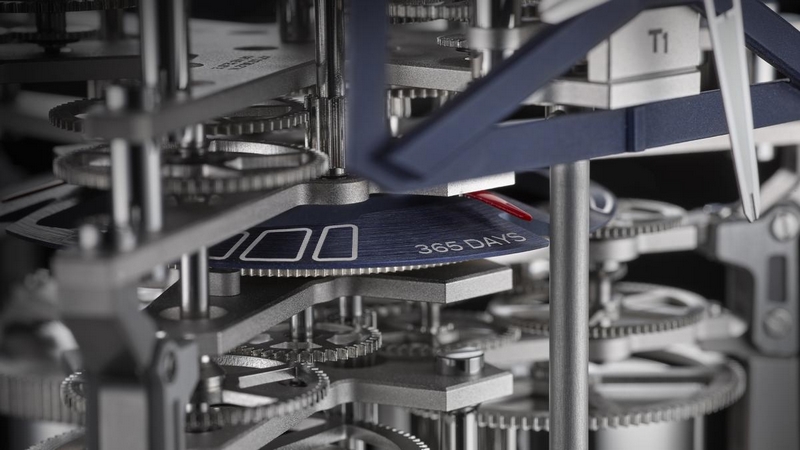 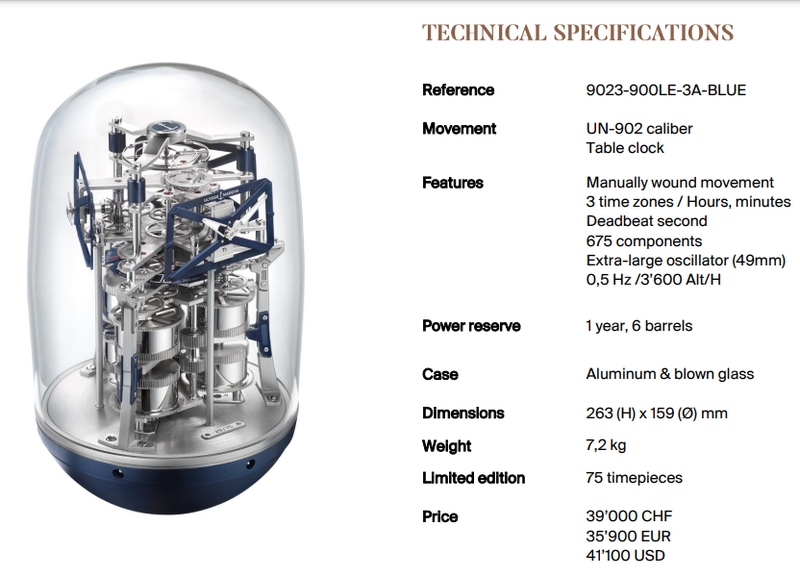 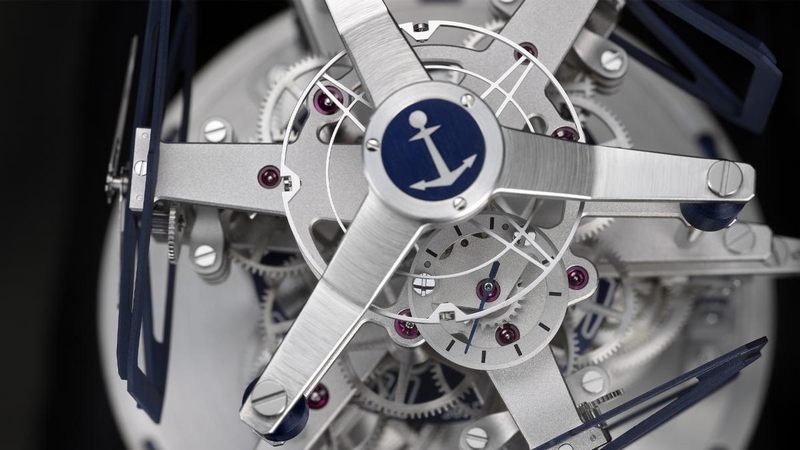 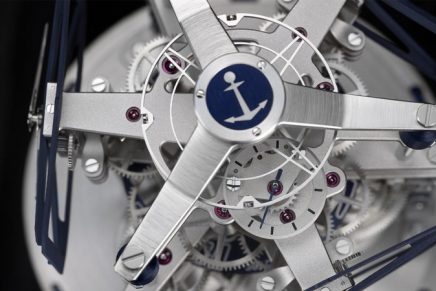 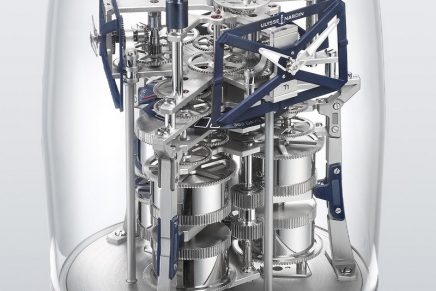 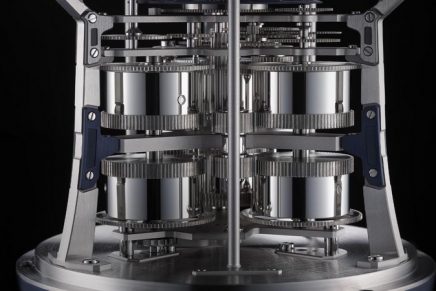 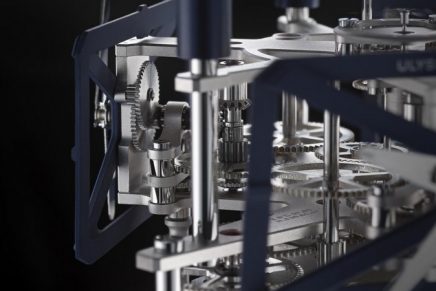 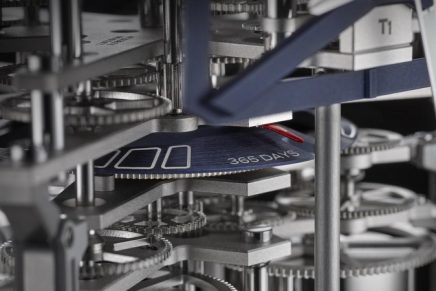 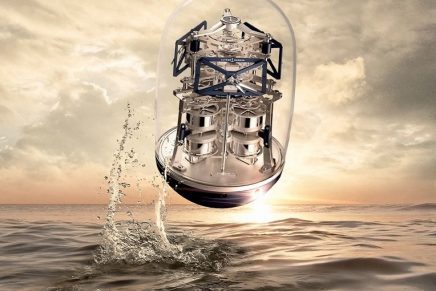 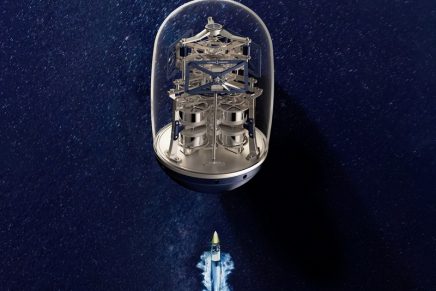 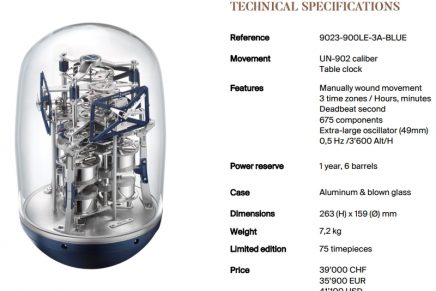