Giant Photo of Royal Family Dominates the Thames for Jubilee 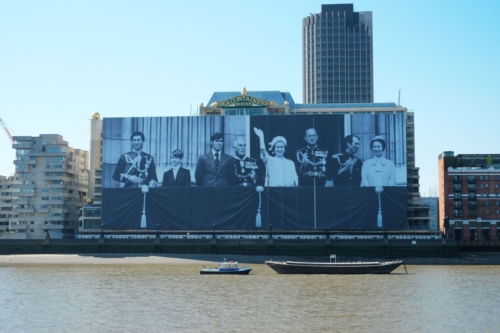 One of the most memorable photographs ever taken of Queen Elizabeth II, Prince Philip and their children was chosen to be displayed on a prominent London’s South Bank building in celebration of the Queen’s Diamond Jubilee. The photo is the largest ever photograph of the Royal Family and was snapped by an unknown photographer during the Silver Jubilee in 1977.

Sea Containers, by Blackfriars Bridge, was covered with the giant picture measuring 100m by 70m and weighing in at nearly two tons. The image was erected by a team of eight people over 45 hours. It is due to remain in place until the end of June.

“When this Silver Jubilee photo was taken 35 years ago, the South Bank was an unvisited stretch of the Thames – not the centre of business, tourism and culture that it is today,” explained Jonathan Ofer, managing director of The Deerbrook Group, which asset manages for the owner.

The enormous canvas serves a dual function as it is also intended to hide redevelopment work taking place inside Sea Containers while the building is being transformed into a luxury Mondrian hotel – the first to open in Europe – and state-of-the-art office space. The work is being carried out by Design Research Studio under the direction of  Tom Dixon, the world renowned designer who is behind some of the most pioneering and innovative lighting and furniture of our time.

“Behind this incredible wrap is a development project that will be complete by the end of 2013, when we reveal my first hotel, the Mondrian London, inspired by the maritime history of the building and the best of British and Americana design from the golden age of ocean travel,” said Tom Dixon.

“In addition to over half of the 360 rooms having river views, the hotel is to feature a rooftop bar, restaurants on the river walk and a unique subterranean spa.

“The project will also provide 300,000 sq ft of superb office space. This building sits on the apex of a bend in the Thames so the office space will have superb views spanning from the Houses of Parliament all the way to the Docklands,” added Dixon.