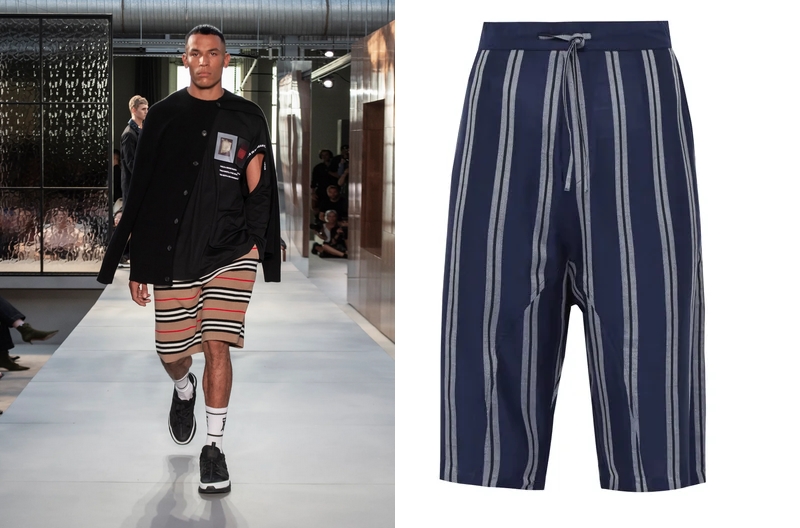 This article titled “The joy of short shorts: ‘Nothing screams liberation like a breeze on your thigh'” was written by Joe Stone, for The Guardian on Friday 5th April 2019 09.00 UTC

Who wears short shorts? For anyone with half an eye on this season’s catwalks, a more pertinent question would be: who doesn’t? They have dominated the spring/summer 2019 shows, making appearances at Prada, Fendi, Missoni, Off-White and Jacquemus. Sales are also up, with matchesfashion.com reporting a 43% rise year on year.

I am not suggesting that anyone jump on a trend just because designers have told them to: that way madness (and looking like Lewis Hamilton) lies. But I can attest to the unbridled joy of skipping out the door in a pair of tiny shorts.

For many men, the idea of showing a bit of leg is a transgression on a par with attempting to marry your cat. I have never understood this. I suppose it comes down to the insidious idea that shorts are childish or effeminate. I am probably not the man to disprove that notion (my favourite pair are printed with Britney Spears artwork). But I do think that if you can’t catch sight of your knees without it compromising your sense of masculinity, then you should unpack why that is. Personally, I battle enough anxiety about global warming without the added stress of wearing jeans through our increasingly common heatwaves.

Why short shorts, as opposed to slightly longer shorts? For me, nothing screams liberation like the feel of a gentle breeze on your upper thigh. More than lidos or Twisters or the upsetting sight of flip-flops on your commute, unleashing my knobbly knees is the surest sign that summer has arrived, albeit in April. Menswear can be incredibly restrictive and boring. I will never experience the rush of wearing a daring red lip or a backless evening gown; stepping out in a loud shirt and small shorts is one of the few ways that I can signal to the world that I am – to borrow from Nicki Minaj (feat Beyoncé) – feeling myself.

The fact that short shorts are frowned on in stuffier quarters only adds to their appeal, lending the wearer the insouciant air of a person who doesn’t have a panic attack when asked to taste wine in a restaurant, and isn’t too terrified to answer an unknown phone number (imagine!). Wearing them, I feel like someone who might conceivably have set foot on a yacht.

Reading this, you may assume that I have incredibly athletic legs, which is… not the case. My love of short shorts has been hard won. I was so self-conscious about my thin limbs that I wouldn’t wear a short sleeve, never mind trouser, until I was in my early 20s – and then only if I were abroad. Perhaps if my younger self had witnessed the majesty of Timothée Chalamet teaming a billowing Oxford shirt with short shorts in Call Me By Your Name, I would have embraced my skinniness sooner. Instead, I sweltered through 26C at Glastonbury 2009 in black jeans before my boyfriend finally declared that enough was enough and wrestled me into a pair of knee-grazing khakis. These were even less flattering than they sound, but proved to be my gateway drug. I reasoned that if I was going to show the bad (lower) part of my leg, I may as well show the good (upper) part, too. These days, I consider any seam longer than about five inches modest.

Obviously, there is every chance I am mincing about feeling like an extra in The Talented Mr Ripley (chic) while looking like an ageing go-go boy (tragic). But shouldn’t fashion be about how it makes you feel, as well as how it makes you look? It is my belief that short shorts suit almost everyone, from Chalamet and Donald Glover, to Daniel Craig and Danny Dyer. I wouldn’t relish seeing Boris Johnson in a pair, but I guarantee someone out there would.

Related: What not to wear if you are a man over 50

Where to wear short shorts remains a matter of debate. The designer Tom Ford says shorts of any kind “should only be worn on the tennis court or on the beach”, but he is a stranger to joy, having once described his then four-year-old son’s trainers as “tacky”. AA Gill claimed that: “Shorts are silly. Men in shorts are silly men. And silly is the very worst thing a man can be.” Wrong! Wouldn’t you rather be silly and carefree than sweaty and repressed? I wear mine most places – although not at work, where previous attempts have been met with alarm and concern. I have worn them to weddings, and would consider christenings (any event where babies wear formal gowns is open season). I might draw the line at funerals, but that would be on a case-by-case basis – and mourners would be encouraged to wear them to mine.

In fact, the only place I rarely wear short shorts is the beach. Why? That’s what Speedos are for.

Joe wears shirt and shorts by Fendi from matchesfashion.com.