More than just telling the time in sophisticated fashion, Urwerk UR-111C TT watch (Limited edition of 25 pieces) embodies both a visual and, especially unusually in watchmaking, a tactile treat for its owner. 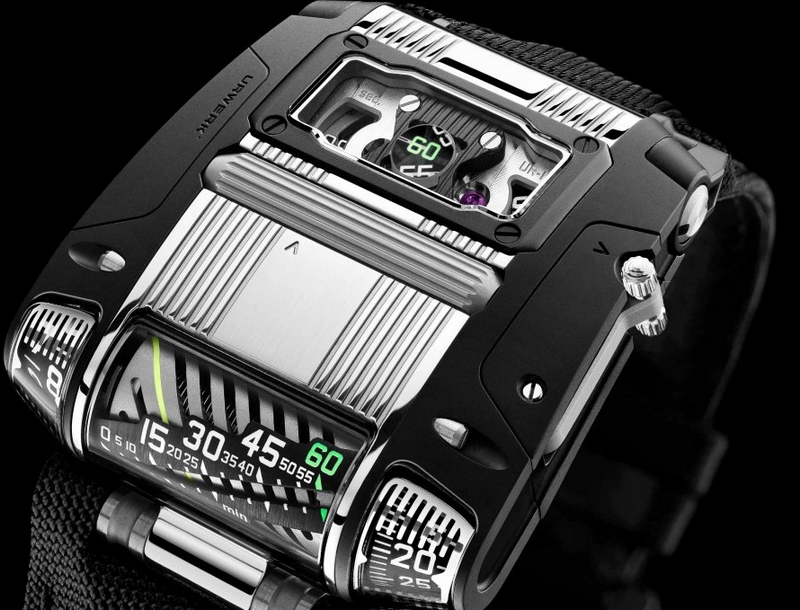 Independent Swiss watchmaker Urwerk has always championed innovation. And its latest model, the UR-111C – now in a striking Two-Tone (TT) black PVD and brushed steel, teardrop profile case – is no exception. Certainly, as part of the “Special Projects” line – a deviation from the wandering hour indications for which Urwerk has become well-known – it’s one of the most conceptually adventurous watches on the market.

The UR-111C TT comes with three key advances for watchmaking.

The first is a retrograde linear minute display in an end-mounted driver’s watch style. This is a spinoff of the mechanism invented for the UR-CC1. With a twist. Here the numerals are set in a 30° diagonal slant for a better readability. This means that the rotating cylinder onto which the minute indicator is painted must rotate 300 degrees about its axis, during which a coiled spring is wound. At the 60th minute, the spring is released, making the indicator jump a further 60 degrees and back to the start position. But it also makes the hour indicator to its left jump too. The result is a pleasing optical illusion of the cylinder rotating endlessly and seamlessly. 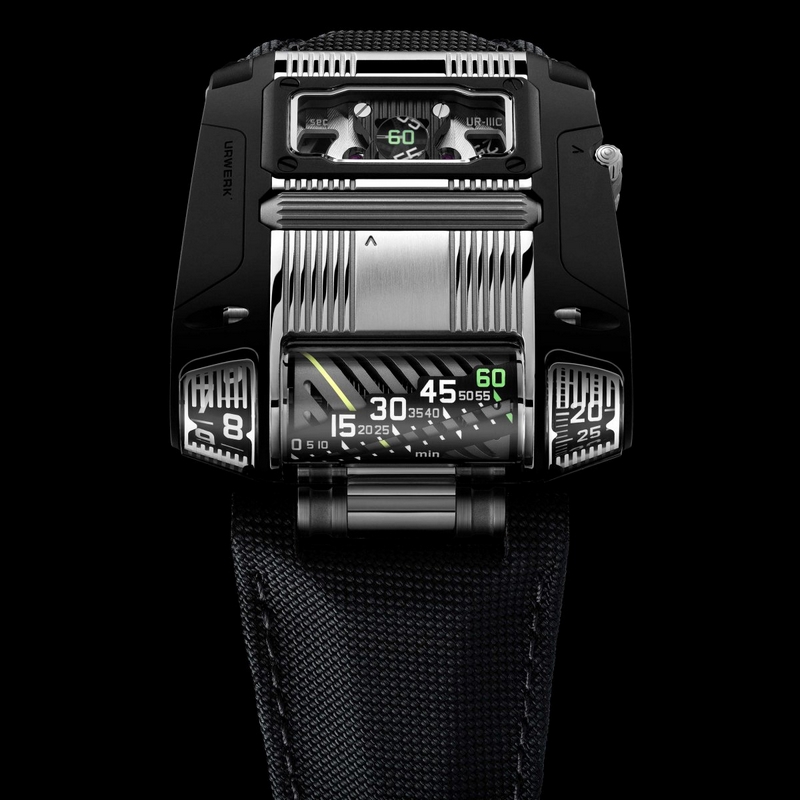 The second innovation is the seconds display.

Openwork Arabic numerals are set onto two wheels, each graduated in ten-second increments. Each wheel is made using a cutting edge process of lithography, electroplating and moulding devised precisely for the creation of very light and specific structures. Indeed, each wheel, complete with its six numerals, weighs just 0.025g – and that’s just as well, given the delicate dance that the two will now take part in. Interlocking like the teeth on cogs, they show a smooth progression of passing seconds. But how is the wearer to see such small-scale elements? They move – at a distance of just one-tenth of a millimetre – under what looks to be a kind of circular lens, but which is a cluster of optical fibres.

The third and, in many ways, most stimulating new concept that the UR-111C introduces is its fresh take on the crown, forwinding and setting. URWERK’s new piece introduces a roller system, positioned right across the middle of the case top. Rolling will further charge the watch’s self-winding movement. When a small lever to the right side of the case is released, the same roller can be used to set the time, with stop-seconds functionality.

Arranging all these micro-mechanics to create the end form of the UR-111C watch has been no easy task, said Urwerk’steam.

The transmission had to be reimagined to allow a horizontal movement to provide a vertical time read-out within the crystal glass-covered truncated cones to both sides of the linear display. Connecting a roller crown to the winding stem likewise took feats of engineering, minuscule in scale but no less striking in effect. 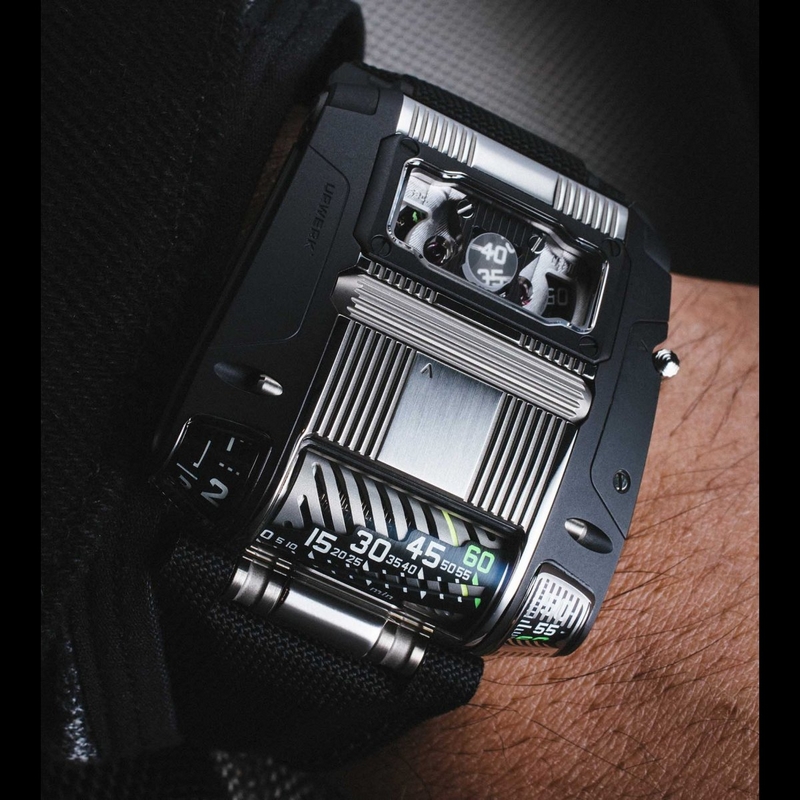 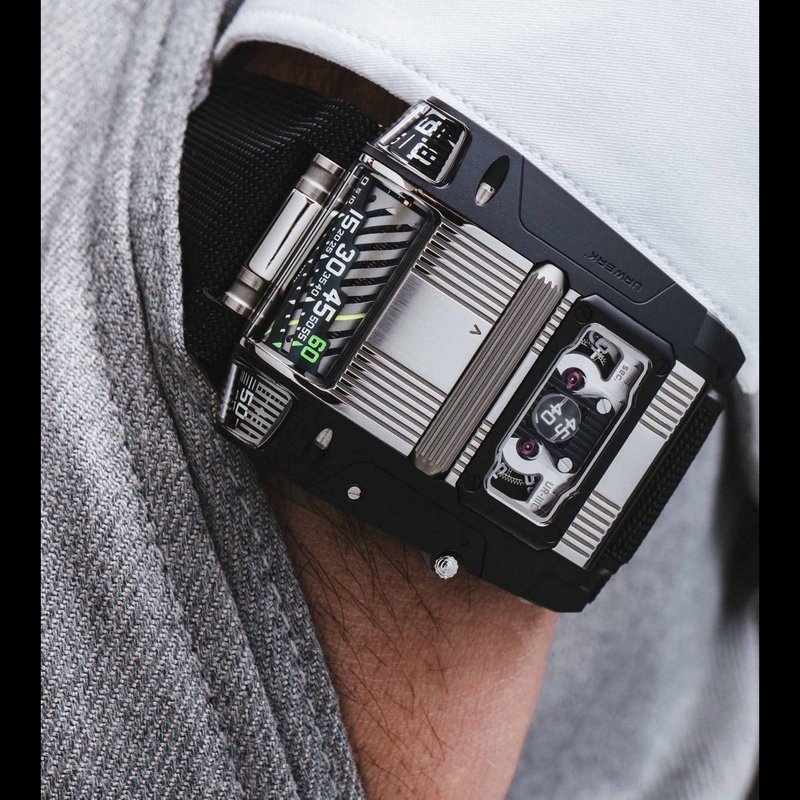 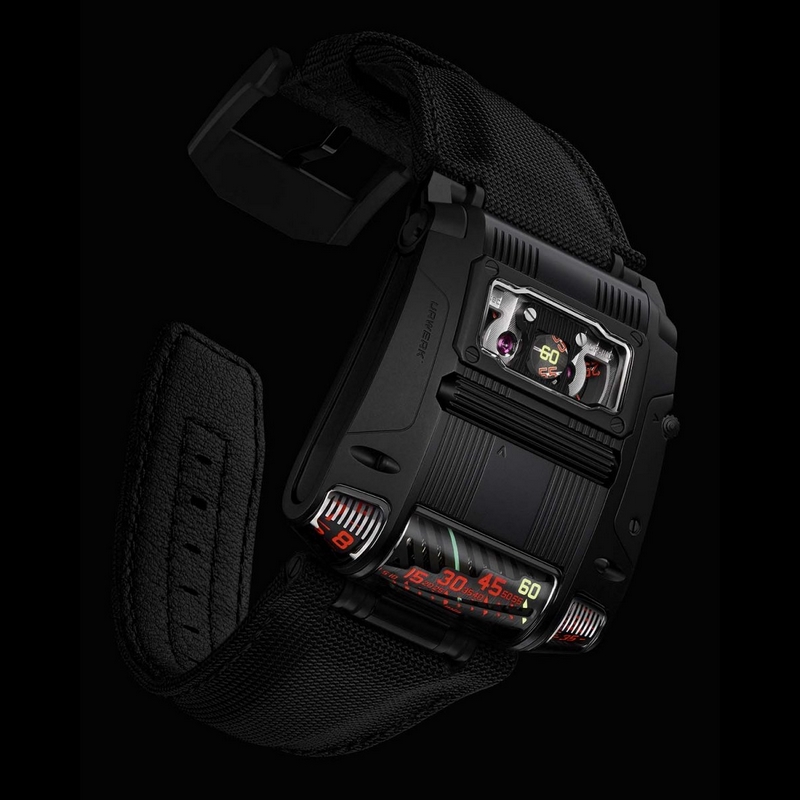 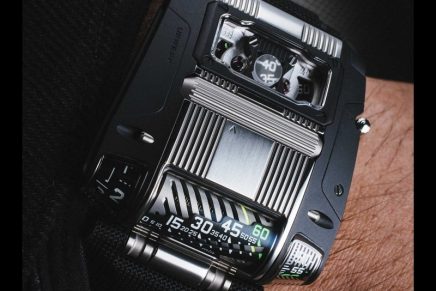 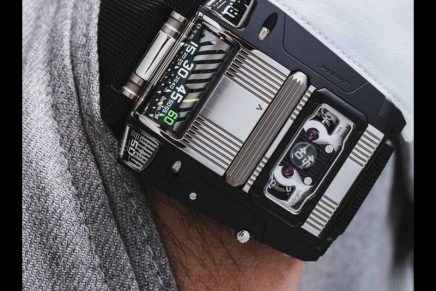 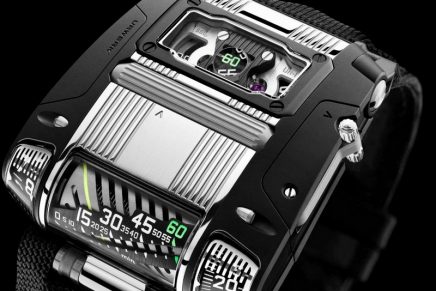 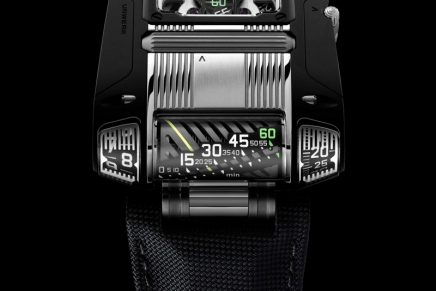 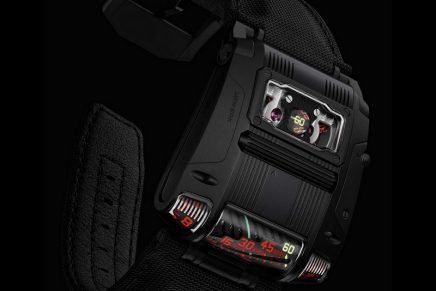