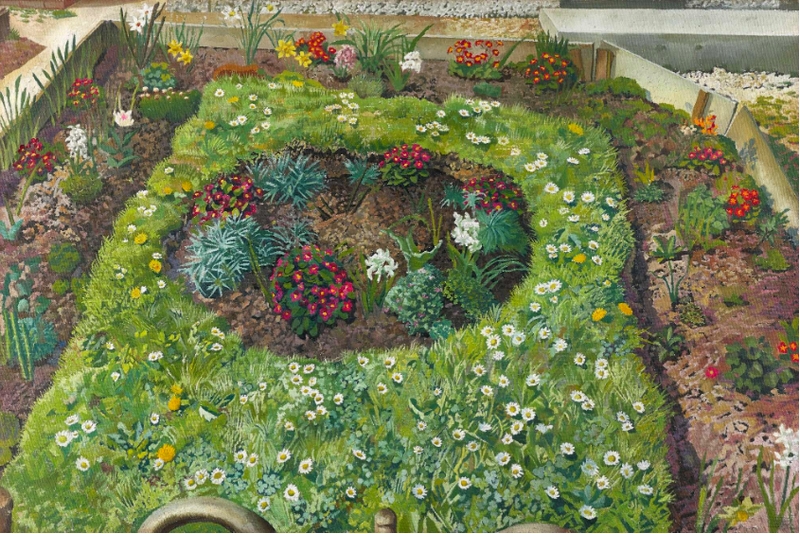 Cottage Garden, Leonard Stanley will be auctioned on 28 July at Sotheby’s. Photograph: @Sotheby’s.

This article titled “Sotheby’s reopens doors with auction of a Stanley Spencer wartime gem” was written by Harriet Sherwood, for The Observer on Saturday 20th June 2020 13.30 UTC

The bucolic joy of a painting by one of the most inspirational British artists of the 20th century is likely to cut through the new reality of face masks, hand sanitiser and social distancing when Sotheby’s opens its doors next month for its first exhibition and live auction since the Covid-19 lockdown began.

In 1940, when Stanley Spencer painted Cottage Garden, Leonard Stanley, one of a series of garden scenes, Britain was at war. Serving officers, no doubt yearning for England’s green and pleasant land, were among those buying the artist’s gentle celebrations of flowerbeds, hedges and lawns.

Eighty years later, in another era marked by uncertainty and anxiety, Spencer’s painting of a cottage garden filled with spring flowers and common daisies is likely again to be a source of reassurance.

Cottage Garden, Leonard Stanley will be on public view at Sotheby’s London gallery for more than three weeks before its sale on 28 July, as part of an exhibition covering more than five centuries of western art. Visitors will be required to wear masks, use hand sanitiser and keep apart from one another.

Spencer painted Cottage Garden, Leonard Stanley in 1940 as a money-maker at a time when he was mired in debt as a result of his tangled love life. A few years after marrying Hilda Carline and fathering two daughters, Spencer became obsessed with his next-door neighbour, the artist Patricia Preece, who lived with her lover Dorothy Hepworth, also an artist.

He left Hilda and the couple divorced. A week after the divorce was finalised, Spencer married Preece but she refused to consummate the union. Spencer signed over the deeds of his house in the Berkshire village of Cookham to his new wife, who forced him to leave, rented out the property and lived on the proceeds. The couple became estranged but Preece refused to grant Spencer a divorce – and after he was knighted more than 20 years later, she insisted on being addressed as Lady Spencer.

With large debts as a result of his lavish courtship of Preece, while continuing to support Hilda and their daughters, Spencer reluctantly increased his output of landscape paintings, which were more commercially successful than his figurative works.

Cottage Garden, Leonard Stanley was painted while Spencer was staying in the Gloucestershire village of Leonard Stanley with the artists George and Daphne Charlton. While there, he had a passionate affair with Daphne while producing some of his most acclaimed figurative paintings, as well as countryside and garden scenes.

Keith Bell, who has authored several books about Spencer’s paintings, said: “Like the best of Spencer’s figure paintings, his garden landscapes succeeded through their searching re-examination of familiar places and objects, an extraordinary control of space, and an ability to draw the viewer into looking again at everyday scenes that might otherwise have received no more than a passing glance.”