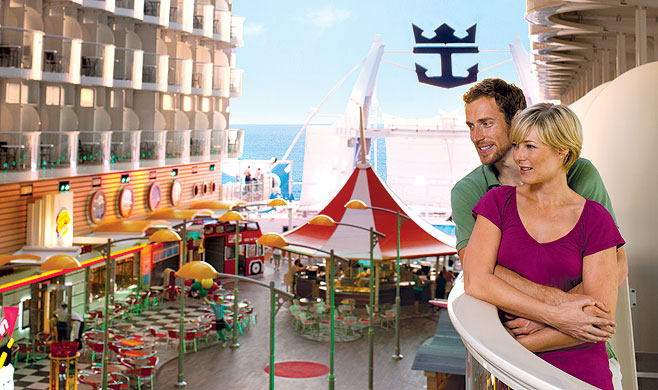 Global cruise vacation company Royal Caribbean intends to build a sister-ship to the very successful Oasis of the Seas and Allure of the Seas, two largest cruise ships in the world.

The third Oasis-class vessel will be delivered in mid-2016 and will hold more than 6,300 passagers and 2,100 crew members. The 361 meters vessel will have a theater, an aquatic park, 20 restaurants, nightclubs, and various high-tech offerings.

Oasis of the Seas and Allure of the Seas are the largest and one of tje most revolutionary cruise ships in the world. They span 16 decks, encompass 225,282 gross registered tons, carrying 5,400 guests at double occupancy, and feature 2,700 staterooms. The ships sail weekly from their home port of Port Everglades in Fort Lauderdale, Florida.

Oasis of the Seas and Allure of the Seas debuted in November 2009 and November 2010 respectively, introducing a range of industry “firsts” and engineering marvels including a neighborhood concept – seven themed areas providing guests with the opportunity to seek out relevant experiences based on their personal style, preference or mood. Within these seven neighborhoods – Central Park, Boardwalk, the Royal Promenade, Pool and Sports Zone, Vitality at Sea Spa and Fitness Center, Entertainment Place and Youth Zone – are extraordinary elements such as the first park at sea, a thrilling zip line that races diagonally nine-decks above an open-air atrium, an original handcrafted carousel, 28 multilevel urban-style loft suites boasting floor- to-ceiling windows, an aquatic amphitheater – called the AquaTheater that serves as a pool by day and a dazzling ocean front theater by night; and an array of epicurean innovations that allow for new culinary experiences each day of a guest’s cruise vacation.