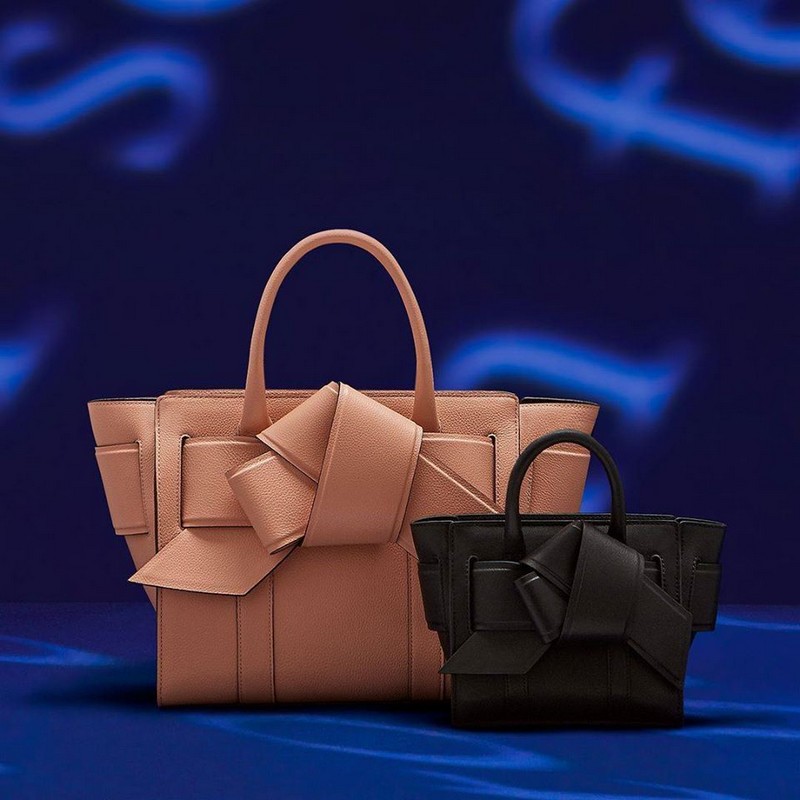 Mulberry Musubi Bayswaters from Mulberry collaboration with Acne Studios are finished with a festive bow. @Mulberry

This article titled “Mulberry reports £11m losses despite efforts to win younger customers” was written by Sarah Butler, for The Guardian on Wednesday 13th November 2019 15.51 UTC

Losses at the luxury British brand Mulberry have increased by a third after widespread discounting hit sales in the UK.

The handbag maker said pretax losses widened to £11m in the six months to 28 September from £8.2m a year before. Sales in the UK, which account for 65% of the business, fell 4% amid challenging conditions and subdued demand from shoppers.

Sales fell despite efforts to connect with younger consumers through a series of gigs in pubs and handbags designed by the former Celine designer Johnny Coca.

Thierry Andretta, Mulberry’s chief executive, said: “The consumer is more and more waiting, in the market in general, for the promotional sales period. The UK is more and more similar to what’s been happening for a long time in the US.”

Mulberry is also among a number of brands affected by difficulties at department stores, which have been discounting heavily in an attempt to attract shoppers.

The brand said it had moved out of three House of Fraser outlets in the period after the troubled department store went into administration last summer and was rescued by Sports Direct. The closures were partly offset by the opening of four John Lewis concessions in the half year, taking Mulberry’s total number of UK concessions to 33, including 19 in John Lewis sites.

Andretta said Mulberry wanted to continue trading in House of Fraser but was waiting for clarity on the future of the chain, which is expected to close a number of stores after Christmas.

Mulberry expects to return to profitability in the second half of its financial year as it continues to increase sales in Asia and online by double digit percentages.

Andretta said he was hopeful of a strong Christmas: “We offer great product at an affordable price with a sustainability angle,” he said.

He said sales growth in Japan and Korea had accelerated and while sales in the UK continued to be affected by weak consumer demand, the brand had opened pop-up stores in Canary Wharf and Gatwick airport.

It is also producing more limited-edition products at its Somerset manufacturing site, which makes about half of Mulberry’s handbags.