Mars500 experiment to open hatch on 520 days isolation
“The most difficult thing for them was being starved of information.” 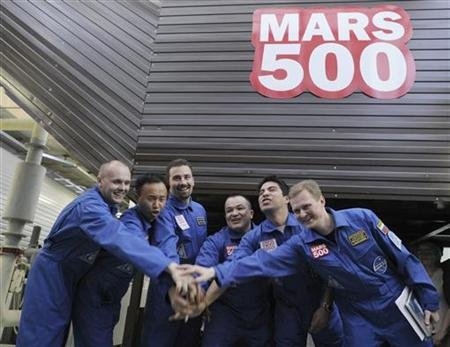 The crew of an isolation experiment to simulate a 520-day mission to Mars are in the final countdown before the opening on Friday of the hatch on the windowless cells in which they have been locked away since June last year.

The $15-million Mars500 experiment aims to answer one of the big questions of deep-space travel: could people endure the stresses of a voyage of more than six months to the Red Planet?

The six male volunteers from Europe, China and Russia are not exposed to weightlessness or solar radiation, but in just about every other way life inside the 550-cubic-meter mock spaceship in Moscow resembles that of a real space flight.

Clothed in blue jumpsuits, the would-be astronauts take daily urine and blood samples, eat rations like those of real astronauts and do not shower often.

Communication with the outside world comes with a 20-minute lag and the crew have faced power outages and other impromptu glitches.

“The research we have points to levels of high stress,” said Igor Ushakov, the head of the Russian Institute for Biomedical Problems which runs the “spaceship.”
“The most difficult thing for them was being starved of information.”

Psychologists fear a return to the noise and activity of ordinary life will come as a shock to the crew, and plan a period of rehabilitation.

“The key principle is to take it step by step to return them to the world which they left,” Ushakov told Reuters.
A previous 420-day experiment ended in drunken disaster in 2000, when two participants got into a fistfight and a third tried to forcibly kiss a female crew member.

But Mars500 is being hailed as a success. The emergency exit remained sealed and it proved an unexpected publicity coup for the European Space Agency, a collaborator on the project.