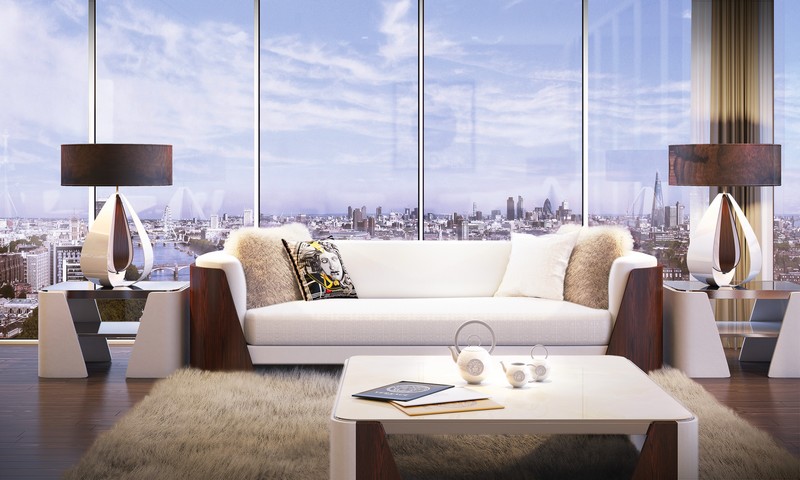 This article titled “Love to hate luxury property in London? This is why you’re wrong” was written by Dave Hill, for theguardian.com on Monday 27th July 2015 14.40 UTC

Property porn. Want some? I know you love to hate this stuff. “A new level of luxury living has arrived in the heart of London,” reads the marketing mush for the promised Aykon Tower, a 50-storey freak erection on the south side of the Thames that doesn’t actually exist except as a sky-scraping stack of “off-plan” sales and its architect’s glistening CGIs. Its blurb breathes that the so-called “Jenga Tower” will provide “the ultimate in branded living experiences”, with “lavish interiors designed by Versace Home”. Fancy a bedsit there for £700,000? Something larger for £4m? Too late, the prices of what’s left have just gone up.

This is the type of thing that makes people loathe London and makes an awful lot of Londoners feel ill. Most Aykon advance sales have been to the overseas super-rich who have (metaphorically) slapped vast wads of cash into estate agents’ hands and expect to see fat returns even before the 360 Versace pads for private purchase have become real. What’s in all this for everyone else?

Well, there is something, actually. Also promised as part of the deal negotiated with Labour-run Lambeth council before it granted the Aykon’s developer planning consent are 90 dwellings that residents of Lambeth who aren’t filthy rich will be able to afford. Of these, 38 will be for “shared ownership”, the form of “affordable” home designed for households on middling London incomes who can’t afford to buy outright. The other 52, of which 21 are family-sized, will be for rent levels well below local market rates – not as low as traditional social housing, but at least within the realm of sanity and still coverable by housing benefit.

Some will say this isn’t good enough. They will variously complain that Lambeth should have driven a harder bargain, that the 90 “affordable” homes aren’t “affordable” enough, and that the “planning gain” they represent isn’t worth the aesthetic pain another giant Thames-side tower will inflict. They will be outraged that the Aykon’s 20% minority of relatively cheap homes will be served by a separate “poor door” and their inhabitants barred from the swimming pool, roof garden, cinema and other exclusive amenities to be provided for the rich folk next door.

Yes, it’s sickening. Yes, things shouldn’t be this way. And, yes, those objections may have some force. But do you want those 90 homes or don’t you? And if you don’t, what have you to say to the 90 Lambeth households you’d deprive? If you were running a London borough whose lower-middle classes are being steadily priced out and whose poorest have effectively formed a queue for social housing that stretches right around the block, where would you find the land and the money to help them with? Were you London’s mayor, what would you do to make things better?

Here are some miserable things to think about. Housing activists and mayoral hopefuls of the left call for an end to “off-plan” sales and promise bans on “poor doors”. They join the popular cry against “rich foreign investors,” saying that their filthy lucre jacks up prices and that they won’t even live in their speculator eyries, being casually content to ”buy to leave”.

Not so fast. Off-plan sales to the rich, be they from Hammersmith or Hong Kong, help fund London housebuilding when the industry is still emerging from a credit crunch-shaped hole. Private housing schemes, be they spectacular or small, have generated about one-third of the affordable homes of all kinds built in London in recent years, according to the Greater London Authority. “Poor doors” are often desired by the housing associations that build the flats behind them because it holds down their cost, making them that bit more affordable.

Steepling “prime central” inflation is seen by market analysts as only one driver among several pushing London house prices up, but as pretty confined in its effects. Posh estate agent Savills thinks there’s a lot less “buy to leave” than some politicians would have you believe. After all, why would you let a bunch of flats stand empty when you can make money by letting them?

Where London’s many housing problems are concerned, there’s a lot more rhetoric than realism. People call for statutory rent regulation, a land value tax, more freedom for boroughs to borrow money to build, increased grant funding from the Treasury, fiercer council tax penalties on empty homes and larger compulsory purchase powers. Don’t hold your breath. Only national government can provide such things and the current one is not that way inclined. That is despite even London’s Tories, Boris Johnson included, and its big businesses favouring of much of the above and, by the way, regarding David Cameron’s plan to extend the right to buy to housing association tenants as a recipe for catastrophe.

The realism that’s required is not the type that dignifies subservience to an absurd status quo, but the variety that recognises the predicaments faced by London boroughs who want to help their less wealthy residents get better housed: predicaments that also await whoever succeeds Boris Johnson at the helm of City Hall after the mayoral election next May.

We all know what we want: more and better homes for Londoners on low and middle incomes; a bigger, cheaper and better-run private rented sector; a settlement of the tensions between conservation and development, one relating to historic buildings and council-owned estates alike, that serves the best interest of the city as whole. The next mayor and the boroughs he or she will work with will have limited assets and powers for working towards those goals. There will be exacting dilemmas and uncomfortable compromises. Progress will not come easily. The best mayoral candidate will be one who sees all this, and tailors policy accordingly.