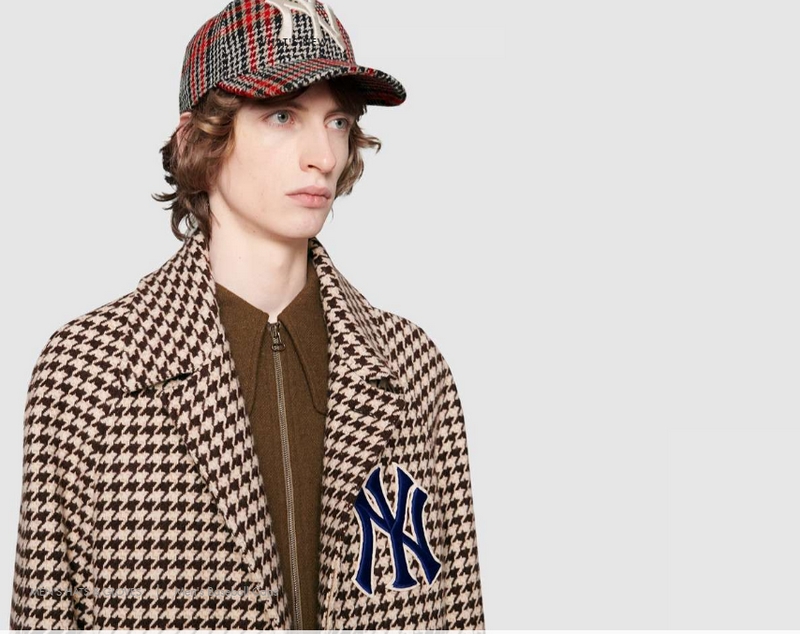 This article titled “Home run! Yankees cap hits the headlines – with a £315 price tag” was written by Ellie Violet Bramley, for The Observer on Saturday 20th October 2018 13.00 UTC

More than the kits of the Chicago Bulls or LA Lakers or the recent World Cup strip of Nigeria, the New York Yankees cap has found favour far beyond the pitch. A long-time celebrity favourite, stalwart of the streetwear scene and perennial on the high street, versions of the cap with its interlocking “NY” logo have this season become a high-fashion favourite, too.

Last week Gucci released a £315 monogrammed version of the signature logo cap, part of a continuing rollout of its autumn/winter Yankees collaboration, which also features caps embellished with butterflies and fawns. Creative director Alessandro Michele has played a big part in the cap’s journey from the baseball diamond to luxury fashion, often taking his post-show bow wearing one. His men’s and womenswear collections this season also featured the insignia on crystal-embellished scarves and sweaters, wool-blend cardigans and leather biker jackets. Last month, lifelong Yankee fan Ralph Lauren released a capsule collaboration with the Bronx-based team, which included an “RL 50” baseball cap, jackets and gloves.

“The mixing up of things that don’t automatically go – baseball and high fashion – is a thing right now,” said Simon Chilvers, men’s style director at matchesfashion.com. Vetements’ use of the logo of logistics company DHL on a £185 T-shirt in 2016 is one of the best-known forebears of this trend. Fiona Firth, buying director at Mr Porter, said: “Michele, as always, is right on trend, re-contextualising this logo for the luxury world. The distinctive ‘anti-fashion’ vision of this collaboration resonates with their customers.”

But before there was high fashion, there were celebrities. In 2009, Jay-Z, a staunch wearer of the cap and avid Yankees fan, rapped: “I made the Yankee hat more famous than a Yankee can.” Other famous wearers have included Nelson Mandela who, at a rally in the team’s stadium in 1990, uttered the words “I am a Yankee” while wearing a cap.

“You get a lot of people who are much bigger celebrities than athletes and they can take the logo across sporting lines,” said New York Times baseball writer Tyler Kepner.

Such is the appeal of the cap that high-profile wearers extend beyond those known to be diehard fans – David and Victoria Beckham were early adopters. For a time it became almost synonymous with the “celebrity hoping to go incognito” look in airport lounges and LA coffee shops; now it is so much a part of celebrity style that it may have the opposite effect. And everyone from Meghan Markle to Gigi Hadid to Kim Kardashian has been spotted wearing one.

So how did the cap come to earn its style stripes? Part of the answer is Spike Lee. In 1996, the film director called New Era, the company that makes hats for Major League Baseball, and requested a customised version in red – until then they had only been available in the classic navy wool with a white symbol. The floodgates opened for fashion to take the cap in new directions.

The Yankees logo also has the streetwear seal of approval. In 2015, skate brand Supreme put it on leather jackets, bucket hats and tees, while New York store Kith has also worked on various collaborations.

Luxury customers are now, according to Chilvers, “increasingly demanding products with a narrative or the cult-like collectible factor”. Firth points out that the Yankees’s “crossover to the fashion industry is an unsurprising step right now with the current domination of streetwear and 90s-influenced trends”.

The logo itself, with its rich history, is often credited with being part of the cap’s global appeal. “It’s not just a symbol of baseball, but of America and Americana,” says New York Times baseball writer Tyler Kepner. It is seen as a symbol of the city, too – and New York will always have fashion cachet. For Chilvers, the current buzz is “part of our increasingly fast moving visual culture where there is so much to look at that anything with a strong identity immediately stands out”.