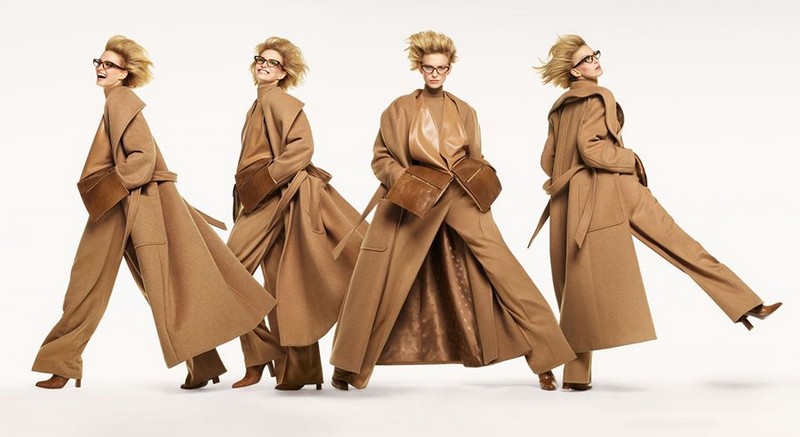 This article titled “Give the gift of the perfect coat this Christmas” was written by Ellen Burney, for theguardian.com on Monday 18th November 2019 16.01 UTC

Fashion fable has it that a sable fur coat gifted to Tiffany & Co designer Elsa Peretti by fashion designer Roy Halston Frowick for Christmas in 1978 soon found itself flung into the flames of a fire. That, she told him, was what she thought of his “superficial things!” So how to succeed in gifting where Frowick failed? Ditch the sable coat and keep it contemporary.

Cult from first cuddle, the faux-fur teddy bear coat trend shows no sign of slumber, making it a failsafe festive gift for the fashion-minded. Where perfume fades and lingerie can let down, teddymania looks set to be a forever friend. While plenty of imitations have pulled up to the picnic, the mastermind brand behind this modern must-have is Max Mara, bundling the likes of Julia Roberts and January Jones in snow white and ruby red coats respectively.

Kim Kardashian West instantly plumped for the malt-coloured must-have and Hailey Bieber wore hers with a beanie and blue jeans. The teddy bear scooped a Best of the Best award for a women’s coat from the Robb Report China. Its prominence propelled further with posturing from social media stars including Eva Chen, director of fashion partnerships at Instagram, and Italian fashion journalist Anna Dello Russo, who both reached for red. This season, pick from corn kernel yellow, cornflower blue and turquoise too. Or for the regal ice-queen, opt for opulent white, as seen on fashion royalty Kaia Gerber, with white thigh-high boots in the AW19 show.

Arguably, the teddy bear coat has become as era-defining as the 1940s fit-and-flare coats of Christian Dior’s new look, or the 1960s curved, cocoon coats of Cristóbal Balenciaga. Hard times, soft pile coat, we say, but the teddy bear coat is not the only Christmas chrysalis from which one can bloom.

For an Ali MacGraw in Love Story meets Shiv Roy from Succession shrugged-a-camel-trenchcoat-over-her-shoulders-and-fair-isle-knit, Max Mara’s Manuela coat should cinch it.

A certain success story would be the gift of the 101801 Icon coat, a versatile wool and cashmere style created for Max Mara – and career women of the 1980s – by French fashion stylist Anne Marie Beretta in 1981. Double-breasted with kimono sleeves, this coat can elevate any ensemble, has never been out of production, and has been picked up from Isabella Rossellini to Claire Danes and Cate Blanchett.

A Max Mara coat has become a sign of the times. A landmark moment came in February 2017, when Kenya-born Somali-American model Halima Aden wore a hijab on a Milan runway – making Max Mara one of the first mainstream fashion brands to feature a hijab-wearing model on the catwalk. It was the Max Mara AW17 show and her camel-coloured headscarf matched her Max Mara camel-hair coat. Last December, speaker of the US House of Representatives Nancy Pelosi’s fire-red funnel-neck Glamis coat made such waves in the White House and beyond that the fashion house chose to reissue the AW12 style.

The teddy bear too has been on a bit of a journey. Griffiths, who studied under Ossie Clark at Manchester Metropolitan University and has headed up Max Mara design for more than 30 years, was first inspired by the label’s plush 1980s archive coats crafted from long-pile fabrics in fibres originally developed in German mills for making high-end childrens’ toys.

Teddy bear coat culture itself trails back further, to the days when deep-pile alpaca coats were luxury motorwear for aristocratic men in unheated cars. See Jeremy Irons as Charles Ryder in the television adaptation of Brideshead Revisited [with Lord Sebastian Flyte and his teddy bear coat too], Salvador Dali aboard the SS Normandie docking in New York on a chilly December day in 1936, or Winston Churchill winding around his Chartwell estate in 1954. Mick Jagger was a big teddy bear coat fan too, wearing a deep brown one in 1966.

Griffiths found the original mills to be closed and so worked with an Italian supplier to redevelop the technology to produce a unique faux fur of pure camel hair on a base of silk to create his teddy bear coat. Such an heirloom coat this Christmas will ultimately be loved long after the last pine needle drops. Revel in the renaissance.

To learn more about Max Mara’s bright and beautiful vision for the holiday season and beyond, visit maxmara.com