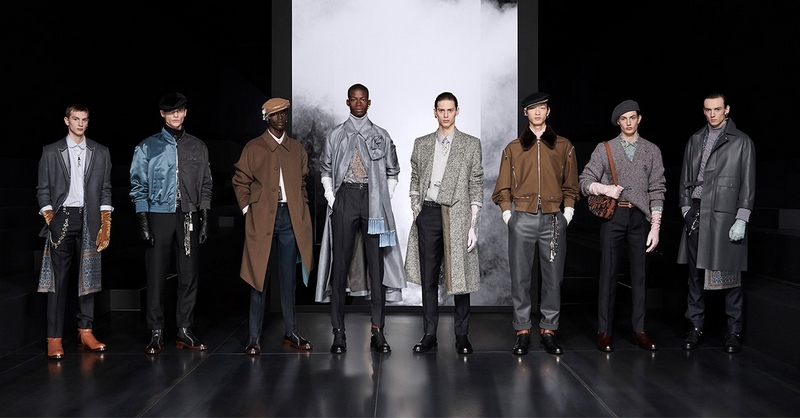 The late influential stylist and accessories designer Judy Blame was the surprise inspiration for Dior Men’s collection, which showed on Friday during Paris Fashion Week.

The ghost of Blame, who defined the late 80s London scene through his work in i-D magazine and The Face, haunted the autumn-winter collection from designer Kim Jones.

“I thought it was nice to do a tribute [to him],” said Jones, who first met Blame when he was 16. “He was really important and cultural. Not only was he doing fashion but he was doing Neneh Cherry, Massive Attack and Bjork’s looks. A generation grew up on his designs.”

Blame’s mantra – “make something. Wear it. Cause trouble” – was in evidence at the show as English subcultures battled it out on Jones’ catwalk to the roaring thump of Fleetwood Mac’s Big Love. There were nods to Teddy Boys, Blitz club-era elements, and Blame’s own Buffalo style, in the form of berets specially made by milliner Stephen Jones.

The collection featured such Blame favourites as opera gloves studded with pearls, Chelsea boots and two-tone bomber jackets. Meanwhile, Dior’s trademark design Toile de Jouy motif was blown up and reconfigured as Toile de Judy on a jumper, and Dior’s famous newsprint print made an appearance on a dress shirt and a formal tie.

The show highlighted the commonalities between Jones’s and Blame’s aesthetics: both mixed styles and cultures together to create something new. For Jones, he combines masculine with feminine, streetwear with tailoring. For Blame, he transformed everyday objects like string and electrical tape into wearable bricolage.

As well as Blame, Jones paid tribute to Dior’s Marc Bohan who had a 30-year career at the house; a dazzling, show-closing bejewelled jacket was based on a dress from Bohan’s 1969 autumn-winter collection.

The show, which marked the two-year anniversary of Blame’s death and was watched by guests including Courtney Love and Victoria Beckham, was a storied piece of nostalgic upcycling, at a time when both sustainability and “looking forward, in order to look back” are key themes in fashion at the moment.

It marked a departure for Jones, who picked up the Designer of The Year gong at the Fashion Awards in December and whose previous shows have been characterised by collaborations (most recently Shawn Stussy and previously with artists including Raymond Pettibon and Danile Arsham).