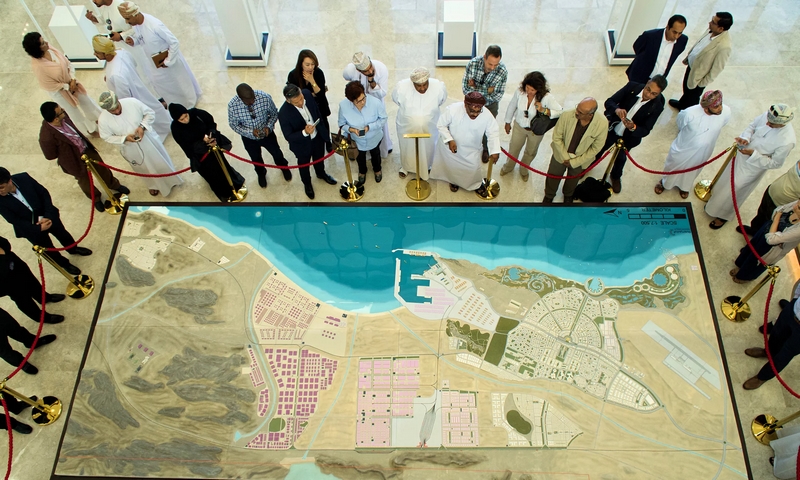 A map of future plans for Duqm. photographs: Wade Shepard;

This article titled “‘Five years ago there was nothing’: inside Duqm, the city rising from the sand” was written by Wade Shepard in Duqm, for theguardian.com on Monday 6th August 2018 06.00 UTC

“Five years ago there was nothing here,” says Hamad Said Al Rawahi as he drives fast along a stretch of freshly paved highway in Oman’s coastal desert. He just picked me up from the side of the road in his shiny black Mercedes. I am hitchhiking – the closest thing to public transport out here.

We are in Duqm, a nascent city about 300 miles (480km) from the capital, Muscat, that was a fishing village prior to 2011, when Oman reimagined it, along with a stretch of uninterrupted coastline and Bedouin camps, as a new special economic zone.

“It has totally changed,” says Al Rawahi, who has lived in Duqm “for a few years” and works at its dry dock. “Now we have five-star hotels and villas … There are shops and supermarkets, places you can go and visit.”

The city is still in its early days. The basic highway grid has just been paved, the port and dry dock have recently begun operating, the oil refinery is getting set to fire up, and two luxury hotels have opened their doors.

Within two years an estimated 111,000 people are expected to call this place home.

The project is the latest of a long line of plans stretching back to the 1980s aimed at developing and populating barren parts of Oman. Around 70% of the country’s population resides within a thin 150-mile-long coastal strip in the north near Muscat. The government now sees its hundreds of miles of unused coastline as full of economic potential.

The masterplan for Duqm follows the guidelines of transit-oriented development virtually step by step. A sea port is being used to seed a vast special economic zone, which in turn is being used as an economic driver for the entirely new metropolis. The full gamut of urban offerings will be built in Duqm: industrial zones, a large refinery, a new airport, education centres, sprawling thickets of modern housing and a tourism district.

The idea is that the various projects will act in symbiosis: traffic at the port will drive demand for industries in the special economic zone, these industries will create a need for housing for employees and investors, and this new population will want entertainment, shops, schools and healthcare. In theory, at least.

The masterplanned nature of Duqm is also intended to allow for a more liberalised economic environment that could spark more private industry, create new types of jobs, and attract foreign investment – while tempting Omanis away from Muscat.

“Duqm is a huge industrial city being built out of thin air,” says Manishankar Prasad, a local researcher who worked on the new city’s environmental and cultural impact assessments. “It will essentially change the locus of industrial activity from the northern parts of the country, which are heavily urbanised. [Having this] huge geographical expanse with this sparse population and no industrial activity is really not the way forward.”

Globally, Duqm is no anomaly. We are in the midst of an era of new cities – with more than 200 currently under construction. Remote deserts all over east Asia, the Middle East and parts of Africa are being urbanised. There’s Nurkent in Kazakhstan, Aylat in Azerbaijan, New Kabul City in Afghanistan, New Baghdad in Iraq, Rawabi in Palestine, King Abdullah Economic City in Saudi Arabia, New Cairo in Egypt … Morocco has nine new cities in the works, and Kuwait has 12.

While differing in scale and complexity, most of these new cities are designed to meet similar goals: to reshape their economies and to rebrand their countries as technologically advanced and economically sustainable, as sleek, modern and international.

Oman is desperate to diversify away from its oil and gas dependency. Research by the US Energy Information Administration puts Oman’s known crude oil reserves at 5.6bn barrels. While this is only enough to rank the country 21st in the world, its economy is disproportionately dependent: oil and gas accounts for nearly half of the country’s GDP, 70% of exports and between 68% and 85% of government revenue.

Related: Cities from the sea: the true cost of reclaimed land

The International Monetary Fund predicted in 2016 that Oman could be one of a host of oil-dependent Middle Eastern countries that could run out of money before the end of the decade. Coming alongside shocks such as the 2014 oil price crash, the message of diversification was driven home.

The government of Oman responded by decreeing that the hydrocarbon-derived share of its GDP will be halved by 2020 . To this end, $106bn (£81bn) was earmarked to develop tourism, transport and real estate sectors – and efforts to bring projects like Duqm to fruition were doubled down.

“Several dozen new cities are being constructed in the Middle East, mainly to transition away from the petroleum industry to a variety of other industries, including tourism, manufacturing, education and hi-tech,” says Dr Sarah Moser, a McGill University geography professor and author of an upcoming atlas of new cities.

“Many oil-producing states in the Middle East are eager to globalise their economies and attract international investors, particularly in anticipation of a post-oil world. New cities are a way to jumpstart this economic transition, and are also seen as a way to start fresh and avoid the entrenched corruption, bureaucracy and political entanglements of existing cities.”

Duqm sits on the Arabian Sea near the Strait of Hormuz, the gateway to the Persian Gulf – and the world’s most glaring oil supply chokepoint. Nearly a fifth of the world’s oil currently flows through this passage, ever prone to disruption. If the Duqm project succeeds, the shipping industry would be able to dock at the gates of the Middle East without needing to go all the way inside.

It is this strategic position that has attracted the attention of Beijing’s much heralded Maritime Silk Road. More than three-quarters of Oman’s crude oil exports go directly to China.

Last year, Oman Wanfang – a consortium of private Chinese companies – staked a $10.7bn 11 sq km claim in Duqm’s special economic zone. The consortium pragmatically dubbed their section of Duqm the Sino-Oman Industrial City and has plans to build an oil refinery, a methanol plant, a solar power equipment production facility, an automobile factory, a building materials plant, a $200m five-star tourism zone and enough homes to support a population of 25,000 in the area.

While the money for this endeavour is not officially coming from the Chinese government, Oman Wanfang clearly has the full political support of Beijing, including approval from the National Development and Reform Commission, which has declared it a “top overseas industrial park”. This high-level political support has greased the path for other Chinese economic adventures in Oman, such as the $3.6bn behemoth of a loan presented to Muscat last year.

Other nations have invested in Duqm too, including Kuwait, Japan, Saudi Arabia and South Korea, and in February it was announced that India would be given access to the port and dry dock for commercial and military purposes.

While Duqm was never very densely populated, around 3,000 Bedouin – mostly fishermen and semi-nomadic herders – called the area home before the bulldozers arrived.

These villages have now been demolished and the Oman government has built a new, modern town for them to relocate to. The houses look as if they were copied and pasted from Muscat – bright, white buildings two storeys high with garages and ornate gateways. There is a mosque in the centre.

The houses stand empty. The local Bedouin prefer their traditional way of life – and want space to keep camels.

“They don’t want to stay in the accommodation provided by the state because they find it very unnatural,” says Prasad. “But modernity has to catch up with them … whether they like it or not.”