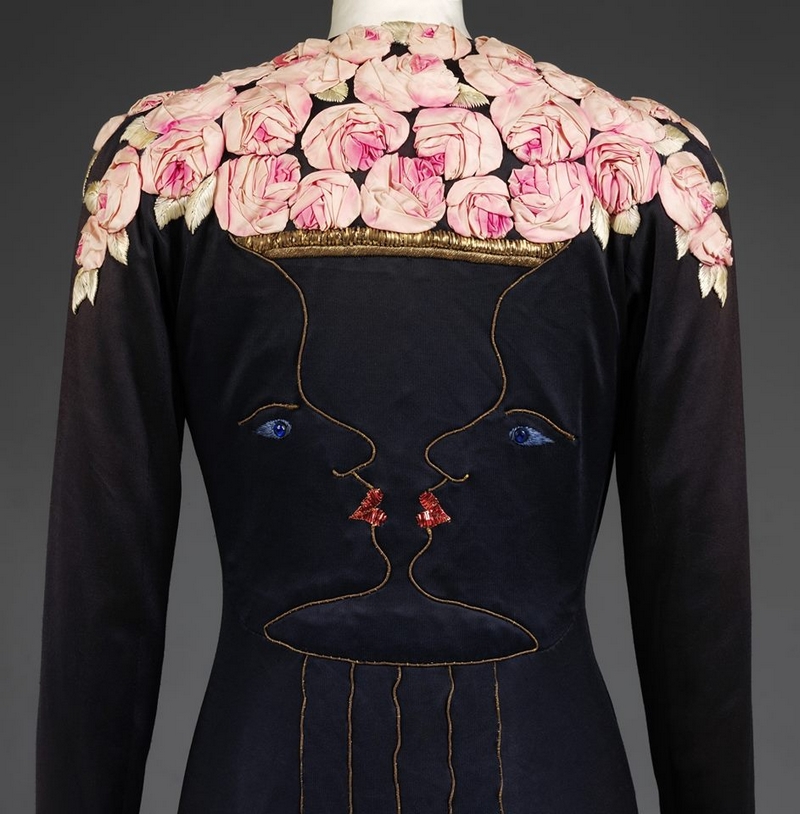 Elsa Schiaparelli evening coat was the result of a magnificent collaboration with Jean Cocteau; photo: vam.ac.uk

This article titled “Female artists are finally in our galleries – let’s keep them there” was written by Naomi Polonsky, for theguardian.com on Thursday 31st January 2019 06.00 UTC

On the face of it, 2018 was a good year for female artists. Museums and galleries across the UK staged exhibitions on historic and contemporary female artists, with events that celebrated 100 years since British women won the right to vote. But now that the bunting has been taken down and the suffragette sashes stowed away, will women still get wall space in our public museums? Are they here to stay or will they have to make way for the next fad?

It’s certainly true that over the past few years, public museums have begun redressing the gender imbalance in their collections. When Tate Modern opened its major extension in 2016, director Frances Morris made a point of dedicating half of the new gallery space to women artists, increasing the percentage on display across the museum from 17% to 36%. And in 2020, the National Gallery will stage its first solo exhibition on a historic female artist – the 17th-century Italian baroque painter Artemisia Gentileschi.

But there is still a long way to go. When the National Gallery acquired Gentileschi’s self-portrait last year, the number of works by female artists in its collection rose from 23 to 24 – out of more than 2,300 in its archives.

It’s not that there has been a shortage of female artists – there have been hundreds over the centuries. But, while many were influential during their lifetimes, they fell into posthumous obscurity because museums did not deem it necessary to collect their works. Invisible in museums, they did not sell well on the art market. In turn, museums did not think it necessary to acquire them, producing a vicious cycle of exclusion. How can this deadlock be broken? It’s not just up to museum directors and curators, but also the museum-going public.

Unlike their European and US counterparts, British public museums have free entry to their permanent collections. Over the past decade, public spending on museums has declined by 13%, from £829m in 2007 to £720m in 2017. So to keep the doors open, venues increasingly rely on revenue from temporary exhibitions. And they tend to play it safe, putting on shows they think will be popular and profitable. And who can blame them? Museums are in a reciprocal relationship with the public and aim to give them what they want. For this reason, many exhibitions focus on the same small group of artists, often with tenuous themes. To take three examples from 2018: Tate Britain’s Impressionists in London, the National Gallery’s Monet & Architecture and the Fitzwilliam’s Whistler and Nature. Such blockbuster exhibitions are guaranteed to bring in visitors; exhibitions on lesser-known artists are not.

Last summer, Tate Modern staged two concurrent exhibitions: Picasso 1932: Love, Fame, Tragedy – covering the creative output of a single year in the artist’s life – attracted 521,080 visitors; a retrospective covering the six-decade-long career of the contemporary American artist Joan Jonas attracted only 47,876. It seems a pity that more people did not come through the door. Those who did were able to discover an innovative and significant artist, who was a pioneer in the development of the emerging art forms of video and performance.

It’s true that two of the most popular exhibitions last year were on female artists: Anni Albers at Tate Modern and Frida Kahlo: Making Her Self Up at the Victoria and Albert Museum (which sold out almost as fast as Glastonbury). And among this year’s hotly anticipated shows are Tate Modern’s retrospectives on Dora Maar and Dorothea Tanning, and the Barbican’s exhibition on Lee Krasner. But apart from being female, these women have something crucial in common: they were all the wives or girlfriends of famous male artists such as Picasso and Jackson Pollock. Though Kahlo may now be better known than her husband, Diego Rivera, early interest in her work arose purely as a consequence of his. A 1933 newspaper headline about her reads: “Wife of the master mural painter gleefully dabbles in works of art.”

Of course, our interest in these women is not only due to curiosity about their love lives. We have greater appreciation for art and artists we are familiar with, so it’s no surprise that our interest in a female artist is enhanced by an understanding of her biography and context.

But to ensure that future generations are familiar with more female artists, we need to be adventurous with the exhibitions we visit now. We need to show that exhibitions on little-known female artists (not just male artists’ Wags) can be put on without damaging the financial health of public museums. We need to help our institutions help us, so that our children and grandchildren inherit a fuller, more representative, more female history of art.

So now that the centenary of the 1918 Representation of the People Act is over, let’s resolve to make a difference this year. Next time there’s an exhibition on a female artist you don’t know, vote with your feet and go along. Your entrance fee could give her a decisive majority.