Being the driver of a Leopard 2 radio-controlled tank

The Main Battle German Tank Leopard 2 A5 is a radio controlled model tank completely made of aluminum in scale 1:8 with a length of 1200 mm and a weight of 50 kg.  German technology and craftsmanship combined with various optical details make this serious big boys toy look, sound and even operate like the real Leopard 2.

Numerous technical adaptations to the original Leopard 2 tank – such as torsion bars and original sound – ensure that you experience the greatest level of a ‘Big Boy Toy’.

The two powerful 24-volt motors combined with a fully-rotating turret and moveable gun barrel will undoubtedly make you feel like being the driver of a real Leopard 2. 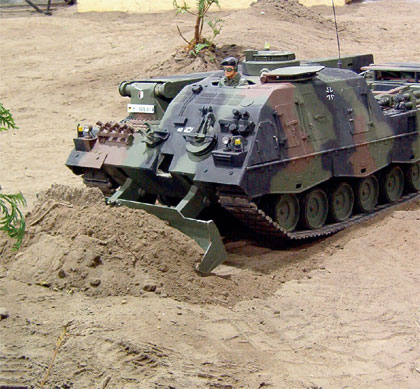