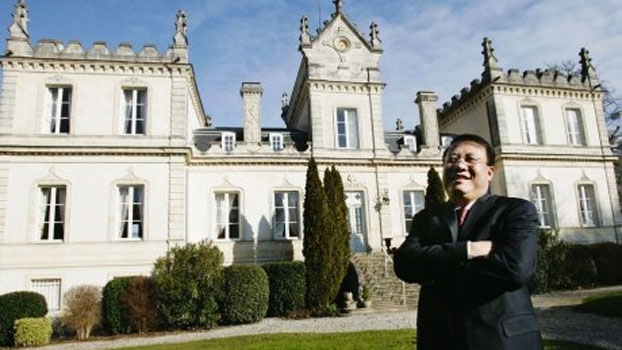 In and around French wine region Bordeaux, more than 12 chateaux are in various stages of acquisition by Chinese investors, according to the Bordeaux Chamber of Commerce (CCIB), which operates a China desk to assist would-be investors in the region. Chateau purchases are often part of a larger strategy to cash in on China’s wine boom.

Chinese customers prefer relatively unknown estates in modest “appellations” — the approved wine-growing areas.
“They can buy a chateau with vineyards for the price of a Paris apartment,” said to AFP Real estate agent Eric Groux of Conseil Patrimoine in Paris who has been selling chateaux for several years with clients in Hong Kong, China and Singapore.

The investments reflect China’s spectacular thirst for Bordeaux, which now accounts for exports of 420,000 hectolitres per year worth 322 million euros to France, according to the Bordeaux Wine Council.

But the Chinese are not just buying wine estates as novelty holiday homes, many of them are serious about wine as a craft and as a business.

“They are interested in the cellars and they surround themselves with experts,” said Eric Groux. “They want to improve the wine and they have the means to do it. It’s a good thing for France’s vineyards.

Ningxia Hong group based in northwestern China and the world’s largest producer of alcohol from goji berries bought Chateau du Grand Moueys – a sprawling, 170-hectare (420-acre) estate near the village of Capian in Bordeaux’s Entre-Deux-Mers region.  Plans are in place for a resort with a nine-hole golf course, nature trail, tennis courts, hotel and 70-seat gourmet Chinese restaurant in the neo-Gothic chateau.

“This will be a Chinese chateau and part of the new culture in Bordeaux. There are a lot of chateaux in Bordeaux but our speciality will be a chateau with Chinese culture.,” said Zhang Jinshan, 48, founder of the Ningxia Hong group.

Typically, Chinese chateau owners ship their entire production back to China effectively closing off the chateau’s production to Western palates. In a noteworthy exception, Zhang intends to keep 10 to 20 percent of Grand Moueys in the European and US markets. He also hopes his estate will become a meeting place for cultural exchange amidst wine and luxury.