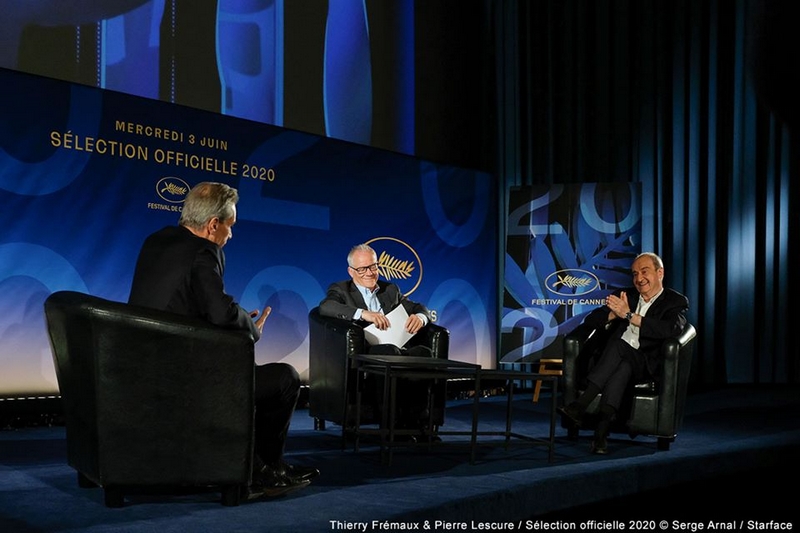 This article titled “Cannes selects lineup for 2020 edition after ‘physical’ festival shelved” was written by Andrew Pulver, for The Guardian on Wednesday 3rd June 2020 17.46 UTC

Wes Anderson, Kate Winslet and Steve McQueen are among the big names whose films have received the stamp of approval from the prestigious Cannes film festival, despite the shelving of its traditional red-carpet-dominated event in mid-May.

Saying “cancellation has never been an option”, Cannes general delegate Thierry Frémaux instead announced a list of 56 films that, he said, would have comprised the festival’s selection for 2020 – films that would have competed for the Palme d’Or, as well as playing sidebars such as Midnight Screenings, Out of Competition, and Un Certain Regard.

Anderson’s new film is described as “a love letter to journalists” set in the French office of a fictional New Yorker style publication, and was heavily trailed by Frémaux in recent weeks. It rounds up Anderson’s customary big-name ensemble cast, including Bill Murray, Tilda Swinton and Benicio del Toro.

McQueen’s contribution is two feature-length films – entitled Lovers Rock and Mangrove – from his forthcoming longform BBC anthology Small Axe, which examines the history of the West Indian immigrant community in London from the 1960s to the 1980s. Mangrove is a dramatisation of the celebrated real-life case of the Mangrove 9 in 1970, which laid bare the depth of police racism in the UK, and stars Black Panther’s Letitia Wright. Lovers Rock features Blue Story’s Micheal Ward in 1980s-set romance. While Cannes has in the past been reluctant to select made-for-television work, it has recently shown David Lynch’s Twin Peaks and Nicolas Winding Refn’s Too Old to Die Young.

McQueen said in a statement: “I dedicate these films to George Floyd and all the other black people that have been murdered, seen or unseen, because of who they are, in the US, UK and elsewhere. ‘If you are the big tree, we are the small axe.’ Black Lives Matter.”

Although the selection appears noticeably short of major Hollywood names – with studios clearly preferring to hedge their bets and keep product back till the post-pandemic situation is clearer – Cannes has the Kate Winslet/Saoirse Ronan starrer Ammonite, directed by British film-maker Francis Lee. Ammonite centres on real-life fossil hunter Mary Anning (played by Winslet) who lived in Lyme Regis in the early 19th century; Ronan plays a wealthy married woman with whom she develops a relationship.

Cannes has also selected Soul, the new animated film from Pixar, directed by Pete Docter which features Jamie Foxx as a jazz musician whose soul separates from his body, while Falling, the directorial debut of Lord of the Rings’ Viggo Mortensen, has been added to the line-up after its successful premiere at Sundance earlier this year.

Other highlights are Aya and the Witch, a new Studio Ghibli animation from Japan, directed by animation legend Hayao Miyazaki’s son Goro and adapted from British kids book Earwig and the Witch by Diana Wynne Jones, and Limbo, a Scottish-set film about refugees directed by Ben Sharrock and produced by FilmFour.

After it had to call off its gala event Cannes has, unlike other festivals, resisted calls to construct a “virtual” festival online. It intends to present its selection at prominent festivals later in the calendar year, including the Toronto, San Sebastian, Telluride and Venice film festivals.

Having faced criticism in recent years for the paucity of female directors in Cannes’ main competition, with only three selected in each of the last three years in a row, Frémaux defended Cannes’ record by saying the 16 female directors in total selected this year (compared to 14 last year, and 11 in 2018) represented an “an evolution observed for several years”. He added: “It testifies, in number and in value, to the artistic and human contribution of women in contemporary cinema.”

Among the crop of female directors for 2020 are Maïwenn, Charlène Favier and Naomi Kawase but as the new selection does not break down films into the traditional categories, direct comparison to previous years is not possible.

The 73rd festival was due to take place between 12-23 May, but after restrictions by French government effectively banned mass gatherings until mid-July at the earliest it was forced to call it off, before subsequently abandoning tentative plans to reschedule it for later in the year. The Cannes Film Market, the film industry trade fair which normally operates alongside the film festival, has been reconfigured as an online event and is due to run on 22-26 June.