The newly created series will feature three Internationals for the season with each taking place at different venues across UK. It will include the newly named Audi International at Guards Polo Club, near Windsor (formerly the Cartier International) – one of the highlights of the British summer season and undoubtedly the biggest attended UK polo event of the year attracting an audience of more than 25,000 spectators.

Having sponsored the England Polo team since 2005, it is a natural progression for Audi to sponsor the Test Match series of international matches providing more opportunities for England to play against some of the world’s top polo teams.

The new extension of existing Audi polo sponsorships will also allow the first ever Audi International match at Chester Racecourse Polo Club in the beautiful setting within the racecourse grounds.

Additionally, the International Series will include the Audi International at Beaufort Polo Club, near Tetbury, Gloucestershire – already a regular fixture on the calendar of Internationals.

The investment by Audi in the International Polo Series, together with its existing sponsorship of the England polo team, will make the car company the biggest supporter of polo in the UK. 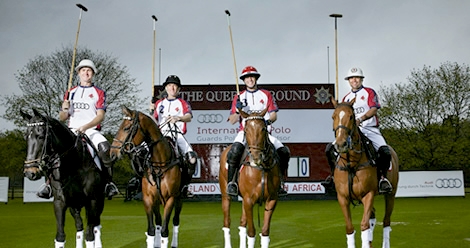