Auto e Moto d’Epoca Padua Fair is always beautiful, it’s the largest market of historic cars and spare parts in Europe and it’s always the best place to find the classic car of your dreams.

4 days, 115.000 sq.m., 11 pavilions, 1600 exhibitors, more than 5000 classic cars, 4 exhibitions, the manufacturers, and the many collectors and enthusiasts from all over Europe. These are the numbers of the 2021 edition of the Auto E Moto d’Epoca in Padua, Italy. 2021 edition was dedicated to the passion for classic motorsport, the great Italian car designers, and the new Restomod electric reconversion trends.

The first exhibition was L’ITALIA CHE VINCE LE CORSE (ITALY WHO WINS THE RACES), dedicated to the Italian brands that marked the history of both car and motorcycle races. Realized in collaboration with MAUTO | Museo Nazionale dell’Automobile (Italian National Car Museum) and the Veloce Classic Collection of London, the exhibition introduced the public to the greatest Italian brands of all time with the world-champion models that have crossed the finish line of the most important competitions. Among the cars displayed, the ultra-light (620 kg) 1955 Lancia-Ferrari D50 that won the 1956 world championship, driven by Juan Manuel Fangio and the 1928 Maserati mod. 26B, the second race car created by the Maserati brothers in their workshops in Bologna. The Maserati mod. 26B won the Italian Championship in Marche in 1928, thanks to its drivers such as Ernesto Maserati, Baconin Borzacchini and Ajmo Maggi. As for the motorcycles, the 1956 4-cylinder Gilera 500 GP that won six world championships between 1950 and 1957, and the 1952 4-cylinder MV Agusta 500, winner of the first world championship title in 1956 and of other eight world championships, the last of which in 1965, were displayed at the exhibition.

Simple, immediate, projected into the future: this is the style of the Bertone Collection. 16 extraordinary prototypes of the great ASI Village of the historical Italian car and motor club (Pavilion 4). UNIVERSO BERTONE, in fact, was the title of the exhibition made up of cars illustrating fifty years of style, from 1967 to 2020, designed by the famous Turin coachbuilder. Except for the iconic mass-produced Lamborghini Miura S of 1967, they are all unique models and concept-cars who amazed the world when unveiled at the most important international car shows. Among these, the Citroën Camargue of 1972, the Ferrari Rainbow of 1976, the Chevrolet Ramarro of 1984, the Bertone Bliz of 1992, the Aston Martin Jet2 of 2004 and the Jaguar B99 of 2011.

ACI STORICO, at pavilion 3 celebrated the Golden Age of Superturismo with the great drivers and cars of the 80s and 90s such as the Alfa GTA of 1992 byAlessandro Nannini and the BMW M3 2500 of 1992 by Roberto Ravaglia.

At the ACI Stand it was possible to find also the exhibition Lancia Endurance: l’avventura in pista di Lancia Martini (Lancia Endurance: adventure on the racetrack by Lancia Martini), the protagonists of which were the three Lancia racing cars of the Fondazione Macaluso: the Beta Montecarlo, the LC1 and the LC2, real motorsport icons of the Eighties in the classic Martini Racing livery. Moreover, 10 Guzzi motorbikes were displayed, one for every decade of the iconic made in Italy brand, to tell the story of the manufacturer that embodied the scientific progress, industry and innovation model in Italy. Among the displayed motorbikes, the Sport 500 produced between 1924 and 1928, the Motoleggera 65 Guzzino (1946-1954), the popular Galletto 160/175/192 (1950-1966), the bold V7 Sport 750 (1971-1974), up to the MGX-21 1400(2016-2019).

Great surprises for Motorsport with regard to the vintage car MARKET which is confirmed as the largest in Europe.

Among the announced novelties: the GP Gipimotor and the Carrozzeria Scartapatti exhibited 3 fabulous Ferraris: the 250 GT Drogo, the 308 GTB Gr.4 elaborated by Facetti and the 250 GT Pininfarina certified as “Ferrari Classiche”. One of the legendary Stratos and the very rare FIAT OttoVù of 1953, the second one ever produced after the 6 pre-series, arrived in the largest stand ever set up in Padua by Ruote da Sogno (Dream Wheels). Instead, from Holland with Fine Automobiles was present the Bugatti T37 of 1926, the car that raced in Le Mans, the Alfa Romeo TZ of 1964, and the Bugatti T57C Gangloff special convertible. AutoLuce exhibited the Alfa Romeo 155 V6 Ti designed to participate in the German DTM championship in the up to 2.5 liters class, with a maximum of 6 cylinders, according to the D1 regulation. The Lancia Rally team, which retired in 1992 with the victory of the Manufacturers’ World Championship, and the Alfa Romeo team which the previous year had conquered the Italian Superturismo with the 155 GTA had merged into the Alfa Romeo racing team.

However, Motorsport was not the only novelty of the 2021 edition of auto e moto d’Epoca.

Another interesting focus was on the “other” classics: talking about Restomod and alternative propulsion systems. Restomod is one of the latest trends in “creative” restorations, contaminated by modern technologies but maintaining continuity with the historic vehicle’s past, therefore keeping the classic cars’ charm but updating them and even making them more enjoyable. A rapidly growing trend in the world of motors, which today is recognized in a consolidated school of thought, also thanks to the interest of some car manufacturers. Examples of this are the Citroën cars brought by the 2CV Méhari Club Cassis which restores and converts classic cars into electric ones, such as the two exemplars in Padua, but it provides also the R-FIT electric conversion kit that allows you to replace the original combustion engine with an electric motor, extending the life of classic cars and thus eliminating CO2 emissions. It is worth mentioning also the made-in-Italy with the Effeffe by Fratelli Frigerio: a tribute to the sporting passion of the 50s and 60s entirely handmade. A nostalgic motorbike that looks to the future also for Miky Biasion and its Delta Integrale. How would his car be if it was produced today? Miki Biasion, the man who won two of the six consecutive Lancia Delta world rallies (an unbeaten record) decided to find out the answer by building one.

For those who love electric cars the fair offered a real return to the future with Stellantis and Mercedes Benz which presented the roots of their electrification path and their latest models. In particular, Stellantis tells the story of 50 years of research that have merged into the Nuova 500 RED, starting from the innovative Fiat X1/23 concept car of 1974. Developed five decades ago, it’s one of the world’s first examples of electric-powered city cars: a small two-seater minivan, with a top speed of 75km/h and a range of 70km at a constant speed of 50km/h. 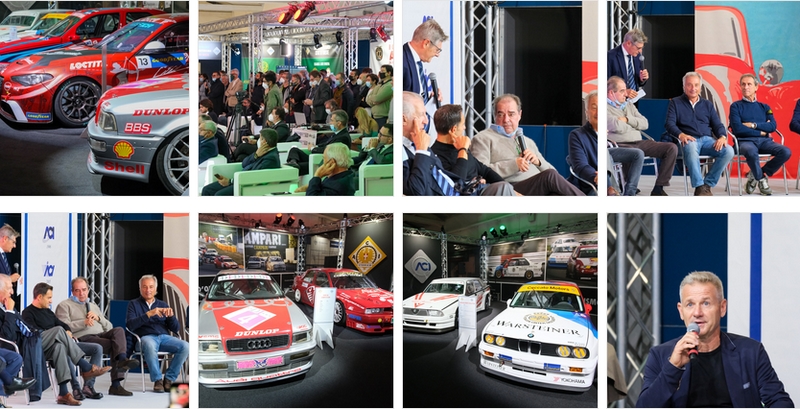 Mercedes-Benz, on the other hand, exhibited the forerunner 190 E Elektro, an experimental model with an electric motor for each of the two rear wheels, presented in Hanover in the 1990s. At the other end of the evolution there’s the electrification pinnacle of the Mercedes-EQ brand, the EQS flagship model.

For McLaren, too, it’s time to present Artura in Padua, the first hybrid supercar of the company which marks the beginning of a new chapter.

News also in the world of spare parts. With more than 600 specialists in spare parts, companies specializing in car care and restoration craftsmen, Padua is confirmed as the largest European market. Moreover, this year, the Heritage Department by Stellantis exhibited restored models and spare parts returned to production.

The Morgan Motor Company premiere also represented the line of continuity between past and future at auto e moto d’Epoca, the historic English brand that produces hand-made sports cars with an unmistakably retro style. The new BMW Motorrad R 18 models also have roots in the past but sustainability as their future goal. The exclusive timeless model of the evergreen Mercedes 190 SL owned by Gina Lollobrigida was also displayed in Padua. Moreover, with regard to the Bentley stand, it was possible to find more examples of speed and sustainable technology with the Continental GT Speed, the most dynamic model of the line, and the new Bentayga Hybrid.

In conclusion, many were the clubs and historical records presented at the classic car fair, such as the l’Alfa Romeo 6C 2300 L Mille Miglia, the first Superleggera ever, and the secular Lancia Lambda, the first modern car in history. It’s the centenary of Vincenzo Lancia’s car which marked the revolution of the automotive industry, three models were on display: a sedan, a balloon and a torpedo.

“For almost 40 years the Fair has built a trust relationship with the public and exhibitors. Everyone knows that it’s always worth to visit auto e moto d’Epoca. A result possible thanks to three fundamental pillars: quality, passion and innovation” said Mario Carlo Baccaglini, organizer of the Fair.

“ The most important thing is that the fair it’s never the same as the years before. In every edition we develop new thematic exhibitions and new lines of study, investing and working with our partners to show an unprecedented aspect of the heritage passion. The Classic heritage always has something to say and Padua is the right place to discover it. The roar of the exhaust, the thrill of driving, the vibrating of the engine, the scent of the interior, the shapes of the bodywork: this is what makes every vintage car unique. Here are the ingredients of the passion to be discovered every year in a different, unprecedented way. With this edition we are breaking all our records by offering visitors four exhibitions and an entire focus dedicated to vintage motorsport”. 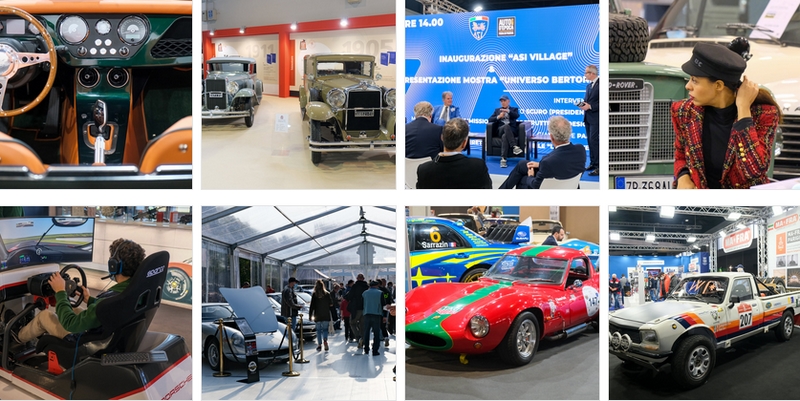 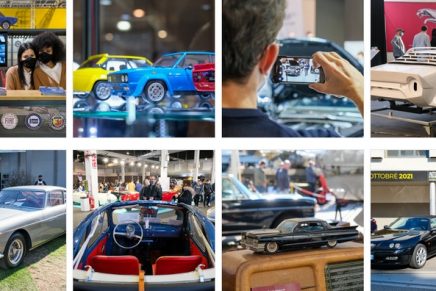 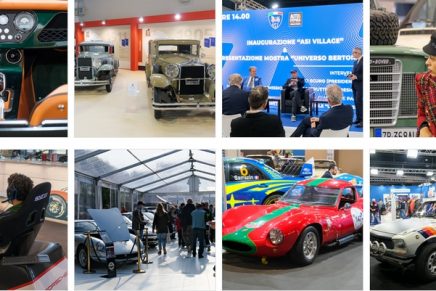 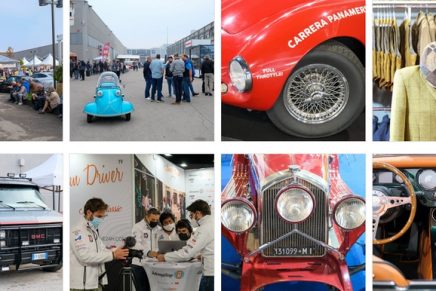 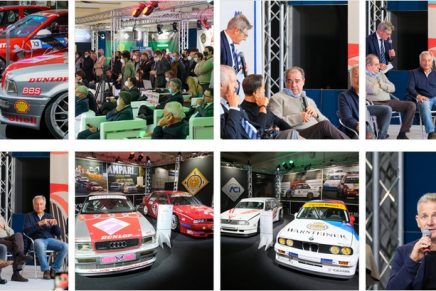 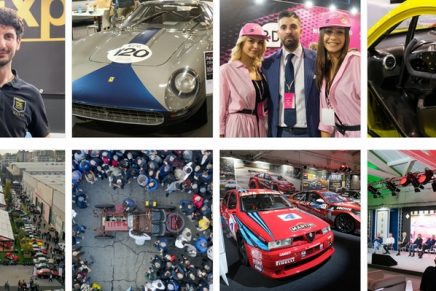