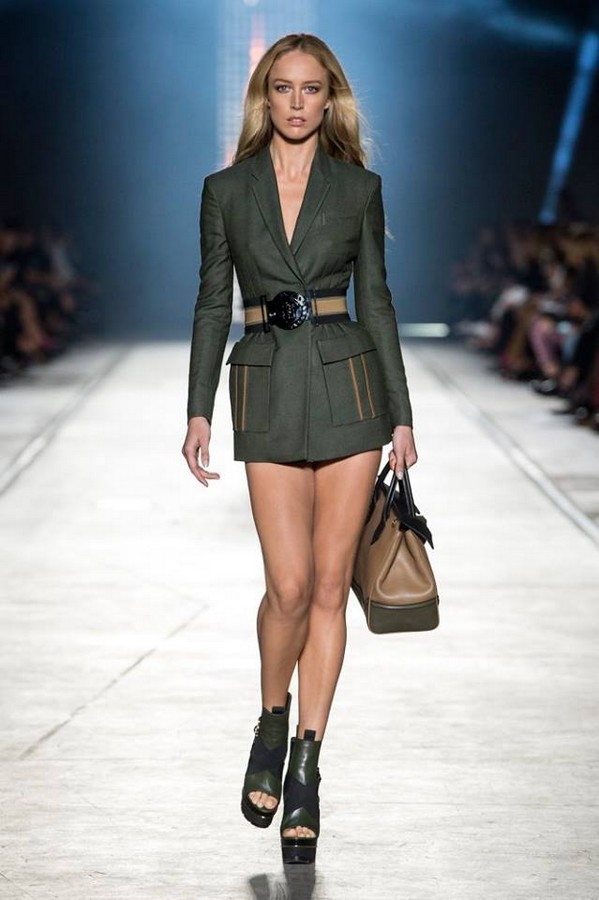 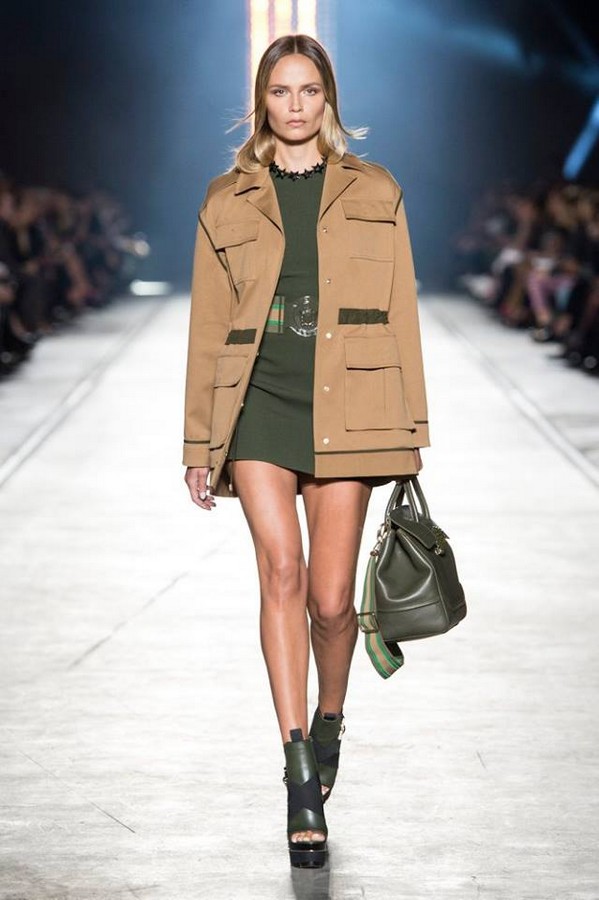 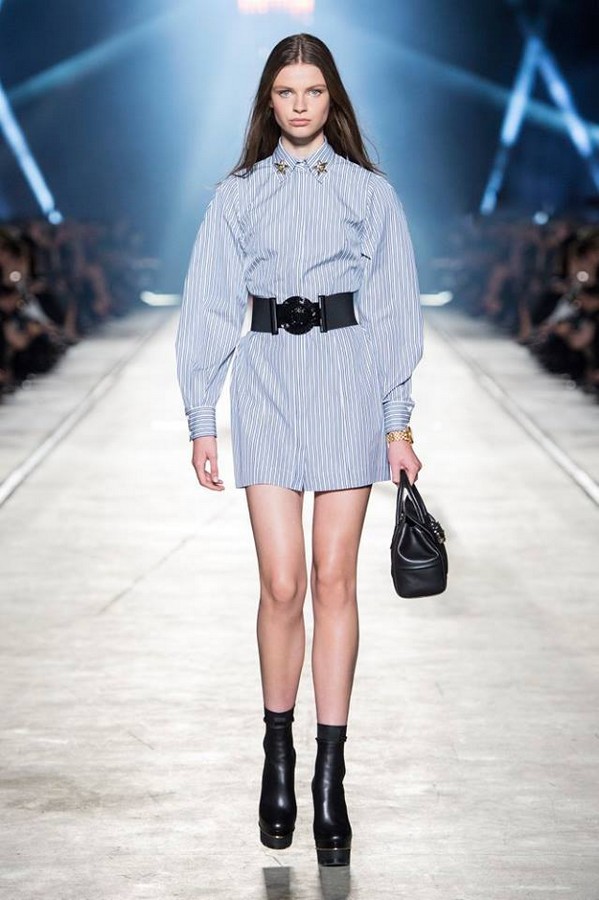 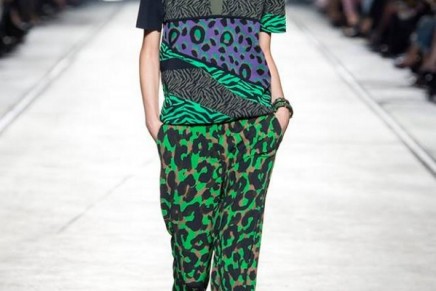 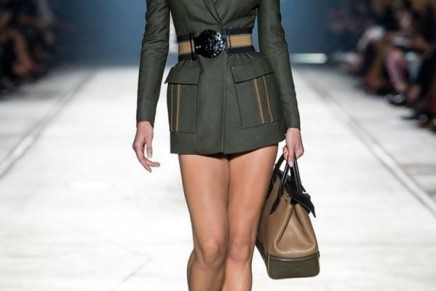 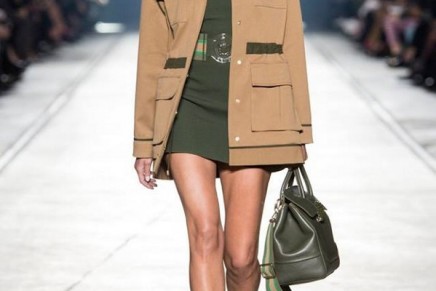 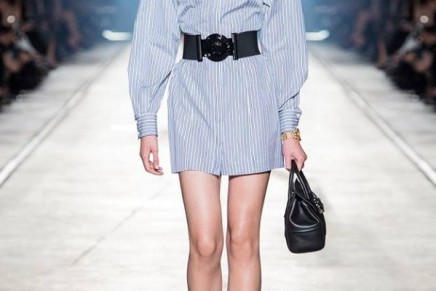 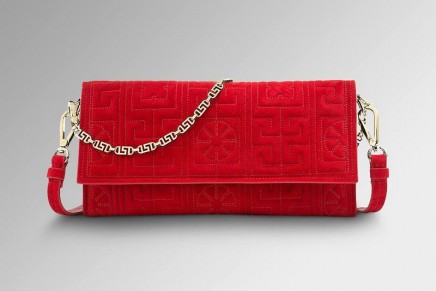 This article titled “Versace stops the traffic in Milan with a twist on camouflage” was written by Hannah Marriott in Milan, for theguardian.com on Friday 25th September 2015 19.57 UTC

Donatella Versace may live a life dedicated to glamour and excess but she is still a creature of habit. Every season, she presents her fashion shows in the glossy, purpose-built theatre within Versace’s neoclassical palazzo on Via Gesú in Milan – until Friday night, that is, when the designer decamped to a cavernous, concrete space towards the outskirts of the city.

Speaking before the presentation, she explained: “To show [at Versace headquarters] feels very safe and I do not want always to be safe.”

Safe is an interesting word in relation to Versace, a brand that finds commercial security in decidedly risqué clothes. Its most famous designs – the green midriff-bearing gown that Jennifer Lopez wore to the Grammy awards in 2000; the frock held together with safety pins that propelled Liz Hurley to stardom in the 1990s – are perilously barely-there creations that appear as though they might louchely fall off at any moment.

But a fashion house cannot live on brazen sex appeal alone, and Versace’s spring/summer 2016 collection – like its venue – was a little different. Taking the title “the Versace woman unleashed in the urban jungle”, models wore a military palette of khaki, olive and brown.

From belted blazers to roomy utility jackets and power suits with loose trousers, many of the silhouettes were uncharacteristically boxy and oversized. There was still skin on show – lots of signature mini-dresses remained and coats were layered over crop tops or styled with the tiniest of shorts underneath. But some of these pieces, when worn in the everyday world with shirts or trousers, could look positively covered-up.

Versace said that the show had a message of female empowerment, expressed by the lyrics of the song on its pounding soundtrack – Transition by Underground Resistance – which spoke of finding strength, ignoring doubters and taking risks.

“I love the way it describes the life a woman who is fearless, who doesn’t let everything stop her,” she said. “She’s a fighter. The song is about communication between women who support each other. I’m one of those women.”

Many of the accessories felt practical, with rucksacks and cross-body bags suitable for hands-free use, even if they were covered in diamanté. There were squishy-soled shoes like luxe hiking gear – these must rank among some of the lowest Versace heels ever.

Some models even wore socks with sandals, a geek chic styling trick more commonly associated with a left-field brand such as Prada than Versace – although admittedly in this incarnation those sandals were seven inch platforms.

Versace said she had been drawn to khaki “because it’s not flashy,” but she also created a traffic-stopping twist on camouflage for about half of the looks, which were combined with leopard-print swirls in hot orange, burgundy and brown and neon yellow, acid green and white. Bizarrely, it worked. All in all it felt like a collection for pounding the pavements – or maybe dancing in a really raucous club – rather than tottering slowly down the red carpet.

In the conservative world of Milan fashion, the show felt like a bit of an event – the venue was fresh, the clothes were beautifully made and would appeal to customers beyond the traditional glitzy Versace base.

Growth has been spurred by a raft of store openings and strong performance by Versace’s more affordable sister line, Versus Versace. That label, which was overseen by Donatella when her brother, Gianni, was still alive, is now designed by Anthony Vaccarello and was shown during London fashion week for the first time earlier this month.