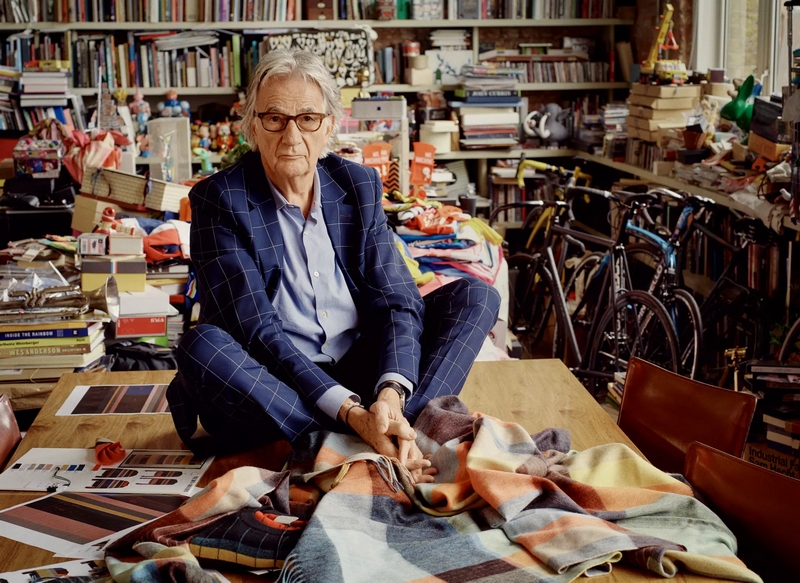 Paul Smith on his muse Anni Albers; Photograph: Ben Quinton for the Guardian

This article titled “Paul Smith on his muse Anni Albers: ‘The rest of us are still struggling to catch up’” was written by Andrew Dickson, for The Guardian on Saturday 6th October 2018 10.00 UTC

Paul Smith races up the stairs of his studio, charging through a corridor crammed with vintage prints, art books, old records, racing bikes and tchotchkes of every conceivable description. Moments later, we’re in a bright, open-plan room where, at 9.15am, young designers are blearily firing up their computers. Smith – hair artfully shaggy, windowpane-check navy suit as dapper as you’d expect – begins rummaging through papers. “Morning!” he bawls to anyone remotely within earshot. “Hiya!”

The focus of his enthusiasm this particular morning is the artist Anni Albers, the subject of a major Tate Modern exhibition opening on 11 October. Inspired by Albers’ Bauhaus textiles, Smith and his team have been working on a limited-edition range of knitwear, and he’s desperate to show me the original reference. Eventually, he locates an image of one of Albers’ geometric wall hangings from 1925 – a gorgeous thing in wool, silk and chenille, swathes of sunflower-yellow and oatmeal shot through with shafts of red, blue and green – before embarking on a 10-minute disquisition on colour theory and yarn counts.

In fairness, if anyone deserves such enthusiasm, it’s Anni Albers. One of the leading female artists of her generation, and perhaps the most influential textile designer of the 20th century, Albers, who died in 1994, is nowhere near as celebrated as she ought to be. While her husband, the painter Josef, has long been acclaimed as a pioneering abstractionist, teacher of Robert Rauschenberg and Cy Twombly, and a cornerstone of art collections across the globe, Anni has been written out of art history. It’s nearly 20 years since her work was last displayed on any scale in the US, and although her profile is somewhat higher in Europe, she’s not what anyone would call a household name. Working in an art form usually dismissed as “craft” – the kind of thing traditionally done by women in their spare time – seemed to all but guarantee her disappearance. The Tate Modern show, which also marks the centenary of the Bauhaus in 2019, will be her first full-scale retrospective in Britain.

Smith first came across Albers’ work in a book on Bauhaus design in the early 70s, when he was alternating odd jobs with an attempt to get his first menswear boutique, in Nottingham, on its feet. “Her designs just jumped out: those slightly clashing colours, ochres, yellows, misty greens, the textures she used.” He laughs. “I carried that book around everywhere, sticking it in my backpack on holiday, poring over it. It completely dropped to bits.”

Smith repaid a creative debt to both the Alberses with a 2015 catwalk collection: sleek suiting enlivened by architectural slabs of colour, partly inspired by research trips the couple made to Mexico in the 30s and 40s. He reaches into a thicket of cycling jerseys flung across a chair – he is as obsessed by the sport as ever – and yanks out a dark woollen men’s suit jacket stippled with off-kilter squares and rectangles. “The ideas they were playing with were so modern – all that lateral thinking.” He shrugs. “The rest of us are still struggling to catch up.”

Anni Albers’ life was every bit as trailblazing as the textiles she created. Born Annelise Elsa Frieda Fleischmann in Berlin, to a wealthy Jewish family, she was determined not to end up a high-society wife and mother. Instead, she set her heart on joining the radical art, design and architecture school in Weimar known as the Bauhaus, founded by the architect Walter Gropius a few years earlier. She enrolled in spring 1922, having already fallen in love with Josef, who was also studying there. The couple married three years later, soon after the Bauhaus moved to a gleaming, Gropius-designed complex in Dessau.

Anni Albers’ aim was to train as a painter (Paul Klee was a lasting influence), but that plan was dashed when it transpired that the weaving workshop, one of the few open to women, despite the Bauhaus’s ostensibly egalitarian philosophy, was the only class that had space. Although she struggled with a muscular illness, Albers learned to weave by hand at a loom, and realised she had found her metier. “Circumstances held me to threads and they won me over,” she wrote decades later. “I learned to listen to them and to speak their language.”

Even by Bauhaus standards, Albers’ early textiles displayed huge originality. Her diploma piece, awarded in 1930, was a light-reflecting, sound-absorbent wall hanging for an auditorium which incorporated cellophane – a material that had only just been invented. But it was the brilliance of her eye that impressed her tutors. Another wall hanging idea, sketched in 1926 and seemingly a response to one of her husband’s designs for stained glass, is a dazzling grid of red, black and orange blocks; it looks like a Mondrian that has been pulled apart, remixed and reassembled. In her inventiveness with different materials (rough and smooth textures, contrasting thread densities, translucent textures, a reflective thread), Albers rivalled anything being done by the cubists on canvas.

By the time the Nazis forced the closure of the Bauhaus in 1933, Albers was in charge of the textile workshop. When she and Josef fled to the US that same year and were invited to join Gropius at a new Bauhaus-style college at Black Mountain in rural North Carolina, legend has it that it was her work, not his, that sealed the deal.

On the vast desk in the centre of Smith’s office, we page through Albers’ designs. One of her most renowned works, With Verticals (1946), could barely be simpler: a reddish linen-cotton ground marked with dark, vertical stripes of different lengths, only 1.5m high. But spend time with it and you notice its rigour as well as its playfulness – the way the stripes echo and balance each other, how your eye is encouraged to roam around the space, never finding a fixed point. In the bottom left-hand corner is Albers’ elegant signature-cum-logo: a straight horizontal line bisected by a jagged stitch, making two As.

Smith says he thinks of music when he looks at her designs. “It’s a bit like rhythm, isn’t it? The energy. It’s like she’s riffing.” He also admires her insistence that designers should understand every aspect of the manufacturing process – something she described as attending to “the yes and no” of materials.

“You can’t do it on a computer,” Smith says. “She knew how important it was to be in contact with the material. She’d say, ‘Ooh, I wonder what would happen if I put a heavy yarn next to that light yarn – how about I play with the tension?’ Little things like that. Suddenly you’ve got a texture that looks like waves or the countryside.”

He lifts up a wool scarf his team has designed: a pane of sapphire blue anchors the composition, warm autumnal colours pierced by a cool shaft of daylight. “Surprise is such an important element of design – she really understood that.”

When Albers was given a major retrospective at MoMA in New York in 1949, it was the first time a creator of textiles had received that honour, and became the first big show for a female artist from the Bauhaus. The exhibition travelled to 26 institutions across North America, something that makes her subsequent neglect more remarkable.

In 1950, the Alberses relocated to Yale, when Josef was appointed head of the university’s design department. Anni continued to work and teach, but was becoming disillusioned that, despite her fame, she still wasn’t taken seriously as an artist. She did more printmaking, believing this would bring the recognition she felt had eluded her as a fabric designer. By the end of the 60s, she had largely given up her loom.

She also began to write more, a discipline she regarded as intimately linked with weaving. In 1965, she produced her monumental book On Weaving, which is still consulted by designers. In it, Albers grapples with the complexities of a discipline that straddles art, craft, fashion and interior design. “We do not speak of designing a picture or concerto,” she wrote, “but of designing a house, a city, a bowl, a fabric. But surely these can all be, like painting or music, works of art. Usefulness does not prevent a thing, anything, from being art.”

She felt style was timeless. You could wear a Roman toga, so long as it was properly draped

Nicholas Fox Weber, who runs the Josef and Anni Albers Foundation in Connecticut, knew the couple well. “She was genuinely democratic,” he says. “She actually preferred the everyday to the domain of the rich.” Contemporary luxury brands would do well to learn from her example, he adds: “She would have had no use for flashy Gucci monograms, or leather goods stamped with Louis Vuitton a million times. She said, ‘Be faithful to the material, not to the name of the designer.’ That was the code she lived by.”

Did she adopt this philosophy herself? “Oh yes. She was always beautifully elegant. She felt style was timeless. And she could be pretty bitchy if she didn’t approve of someone’s clothes. You could wear a Roman toga if you wanted, so long as it was properly draped.”

Weber argues that Albers’ sensibility remains visible in everything from everyday design to high art, from the “moquette” fabrics fitted to seats on the London Underground (created by the British duo Harriet Wallace-Jones and Emma Sewell, who work on hand looms as she did) to the work of contemporary artists such as Sarah Sze and Sheila Hicks. In future, it won’t be possible to tell the story of modern art without her, he suggests. “She’s comparable to Mondrian or Klee – I honestly believe that. It’s some of the greatest abstract work ever – it just happens to be cloth rather than paint on canvas.”

Smith puts it more straightforwardly. “So many people look, but they don’t know how to see,” he says. “Anni really saw.”

Commenting on this piece? If you would like your comment to be considered for inclusion on Weekend magazine’s letters page in print, please email weekend@theguardian.com, including your name and address (not for publication).