At the Geneva Motor Show 2011 has been finally unveiled the Pagani Zonda successor.
The new Pagani Huayra is powered by a 700HP 6-litre V12 Mercedes-AMG biturbo engine, with torque of more than 1000Nm. The supercar boasts a carbon-titanium monocoque and gullwing doors.

Pagani Huayra weighs just 1350kg. The phenomenal power and torque is transferred to the wheels via a seven-speed sequential gearbox and a dual-disc clutch.

By minimising the rear overhang, Pagani is aiming to give its new model more ‘neutral’ behaviour, helped by suspension geometry developed from that of the Zonda, and Pirelli P Zero tyres. These tyres, designed to fit the Huayra, are rated to 370km/h and a lateral forces of 1.5G. The titanium exhaust system uses race technology to ensure a free flow of exhaust gases. The

Pagani Huayra sound should “translate into a harmonious and deep roar that portends a wave of power ready to erupt with a roar, accompanied by the hiss generated by aircraft intakes’ air”.

Think of Huayra as a wing able to actively change its angle of attack. There are, it appears, four independentl operated flaps on the car, so that it constantly changes its shape, depending on speed, yaw rate, lateral acceleration, steering angle and throttle position. 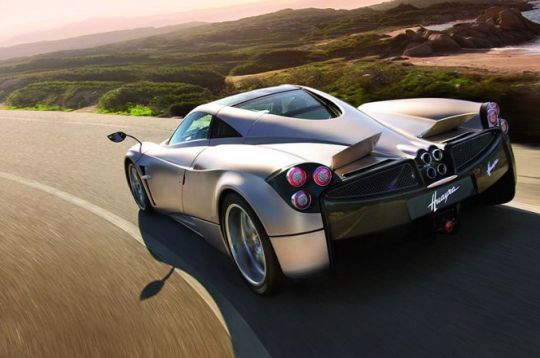