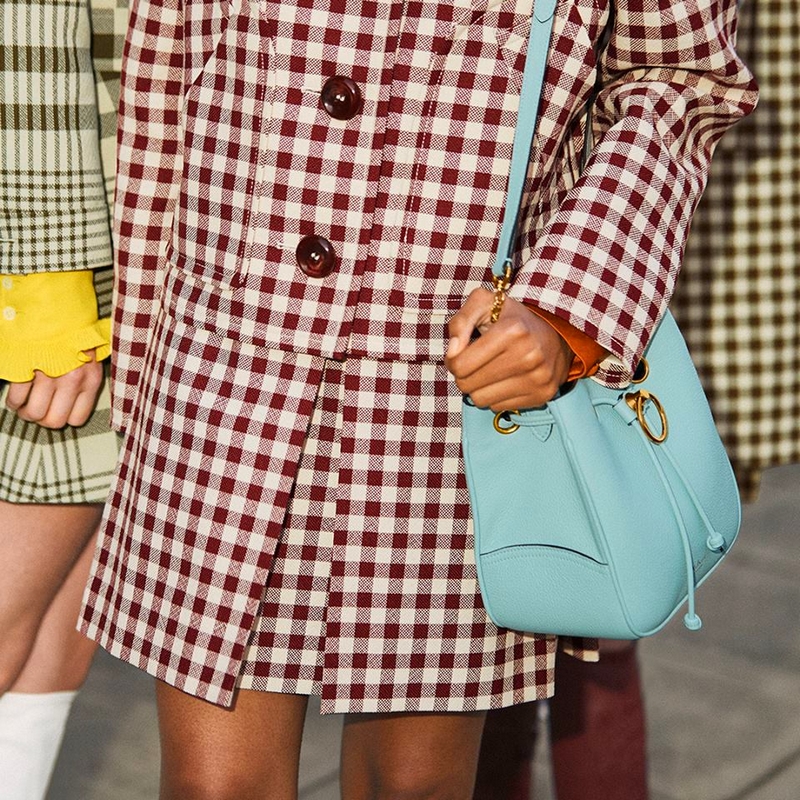 New Vintage: The Hampstead is the first bag from Mulberry new collection. As a whole, the season makes an optimistic reference to the sixties: a period of joy, revolution, freedom and femininity. photo: mulberry

This article titled “Mulberry blames high street crisis and House of Fraser woes for loss” was written by Zoe Wood and Sarah Butler, for theguardian.com on Wednesday 7th November 2018 12.58 UTC

The luxury handbag maker Mulberry has blamed tough high street conditions and the collapse of House of Fraser for widening first half losses.

The company, best known for its Bayswater and Alexa bags, slumped to a loss before tax of £8.2m in the six months to 30 September, compared with £600,000 a year ago, as the failure of House of Fraser wiped out more than £2m of profit. Overall sales fell 8% to £68.3m despite a strong showing overseas.

“The group’s UK business remains profitable although sales have been affected by the House of Fraser administration, softer UK demand and lower tourist footfall,” said its chief executive, Thierry Andretta. He said a shift in timing of a key sale period had also affected takings.

Sales at UK stores were down 11% for the half year. Trading has continued to suffer since then with sales at shops open more than one year, excluding House of Fraser, running 7% down over the last six weeks.

But Andretta said that he did not believe there was a problem with Mulberry’s product or strategy.

“We are positive despite a challenging six months,” he said.

The UK market accounts for nearly 70% of Mulberry sales and the company had already told investors it would suffer a hit on the back of House of Fraser’s administration. The department store chain’s new owner Mike Ashley’s Sports Direct is not obliged to pay the near-£1bn owed to creditors at the time of its collapse and so far only 22 of its 59 stores have been formally saved.

The House of Fraser collapse resulted in a bad debt and asset write-off of £2.1m at Mulberry with sales in the concessions and via the department store’s website “materially lower” during the period.

From mid August, when the department store fell into administration, to the end of September, Mulberry’s sales via House of Fraser halved to £1m from £2m in the same period a year before. The drop is partly the result of the closure of three concessions in the department store chain, where Mulberry still has 17 outlets.

Mulberry wanted to continue working with House of Fraser but, Andretta said, “It is not in our hands, we need to know what they will do.”

Mulberry, the UK’s biggest manufacturer of leather goods, has struck a new deal to open concessions in John Lewis stores, which it previously dealt with as a wholesale customer, as it seeks to rebuild its UK department store business. Mulberry has 18 concessions in John Lewis under the new deal and will be distributing a much wider range of goods via the department store’s website. Andretta said Mulberry might extend the relationship depending on how things developed with House of Fraser.

“In some cities we will need to make a decision but it is not out of one or into the other. Our ultimate goal is to give best in class service for the luxury customer in the UK.”

The deal with John Lewis will result in a £1.4m charge to Mulberry in the second half after it bought back stock from the department store ahead of the move.