Longines will be the official timekeeper for all equine events organised by Dubai’s sporting business and lifestyle centre Meydan. The sponsorship continues a five-year relationship between the two, and one that Humid Al Teyer, chairman and chief executive of Meydan group, has called an “historic agreement”.

The Dubai World Cup enters its 17th year in 2012 and is regarded as the richest horse race in the world with a combined prize-money purse of over US$27 million. 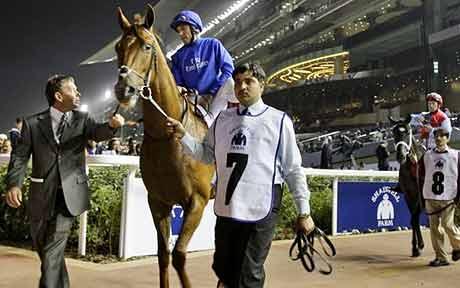 “This is a partnership that will promote the further growth and development of Meydan racing, the Dubai World Cup and our related equestrian pursuits conducted through the Dubai Equestrian Club and the Emirates Equestrian Centre,” he added. “The traditions of Meydan and Longines are recognized worldwide and this partnership will further promote our commitment in providing the highest level of quality in our pursuits.”

The sponsorship will be cover the US$5 million Dubai Sheema Classic Group One race during the Dubai World Cup to be held at Meydan on the 31st March.

Longines has been responsible for official timekeeping at numerous international events such as the CSIO Nations Cup, the Kentucky Derby, the Prix de Diane Longines, Royal Ascot, the Melbourne Cup carnival, the Longines Singapore Gold Cup and the Longines Lydia Tesio Race in Rome.