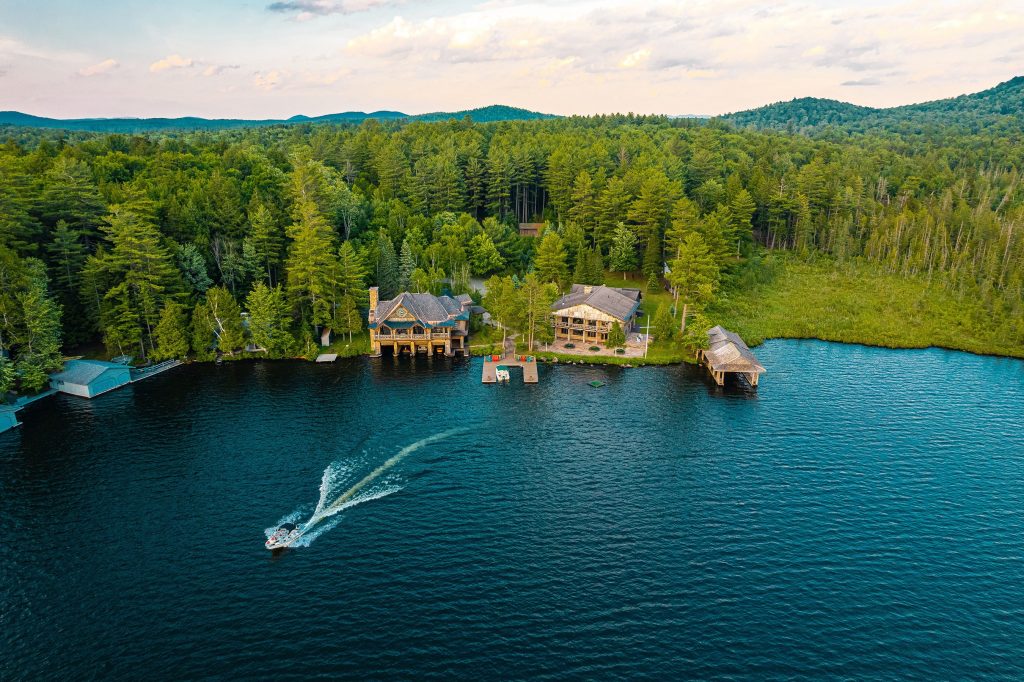 The exclusive lake community, home to approximately 50 properties, boasts a unique history. Members of some of America’s most prominent families – such as Marjorie Merriweather Post (daughter of C. W. Post, founder of General Foods) – established camps at the lake in the early 1900’s. These influential residents welcomed to the lake nearly every sitting U.S. President since the 1950’s. Upper St. Regis has also hosted U.S. Supreme Court justices and Secretaries of State, foreign dignitaries such as Tony Blair and Mikhail Gorbachev, and famous artists such as Winslow Homer.

With approx. 900 feet of direct frontage on Upper St. Regis Lake, Camp Limberlost is crafted for those who love the waterfront lifestyle.

“It’s a very special lake community with such an incredible history,” said Trayor Lesnock, Platinum’s Founder and President. “The roster of past and present owners is quite a ‘Who’s Who’ of prominent families and business magnates.” Lesnock added that properties change hands infrequently on the lake, adding to its exclusivity. For example, a property Platinum sold there in August 2020 had been owned by the same family for 125 years before reselling at luxury auction.

The camp’s intentionally rustic style, common to New York’s “Adirondack Great Camps,” has earned it features on HGTV and Architectural Digest. It has also served as a commercial photo/video location for many large corporate brands.

Limberlost touts 5 total living structures, all “winterized” for year-round living. In total, there are 17 bedrooms, 11 full and 4 half-baths. It’s two most prominent structures, a two-story boathouse and adjacent residence, are situated directly along the property’s 900 feet of lake frontage, a pleasant contrast to most other properties on the lake that are substantially set back from the shoreline, with views obscured by heavy foliage. 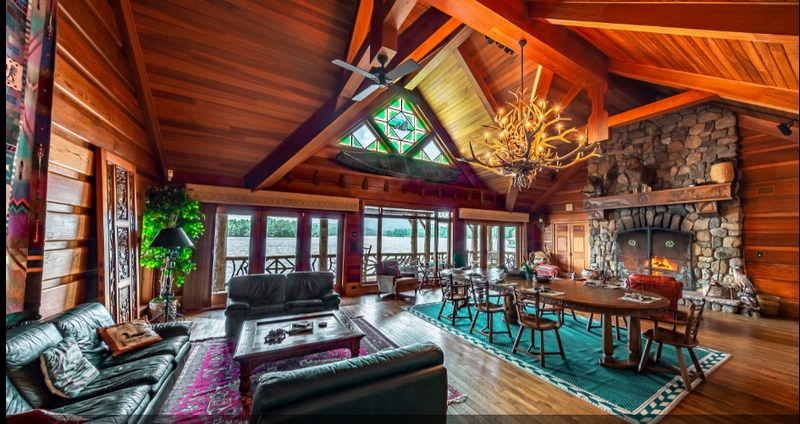 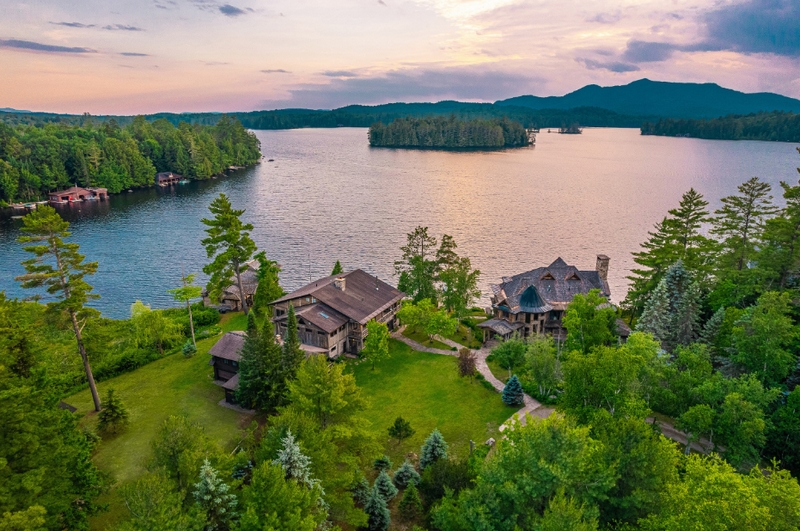 Designed to embrace the waterfront lifestyle, the property’s boathouse includes four covered boat slips, a rolling launch and dry storage for multiple guide boats. There is also a separate canoe house with a covered slip and dry storage, in addition to a large, u-shaped dock able to accommodate several small-to-medium boats.

Other property features include a waterfront great room with 20-ft ceilings, exposed wood beams and hand-laid stone fireplace, in addition to a private elevator, multiple offices, prep and commercial-grade kitchens, and an indoor “lap pool.” Grounds include a private boardwalk that gently winds through the property’s forested areas – ideal for nature walks, photography or simply a breath of fresh air.

Despite its exclusivity, Camp Limberlost is less than 10 minutes from the Adirondack Regional Airport (able to accommodate large jets) and within 30 mins of Lake Placid and Saranac Lake. In addition, the high-end property is directly accessible via roadway, offering a huge convenience over most of the lake’s other properties that are only accessible via boat. 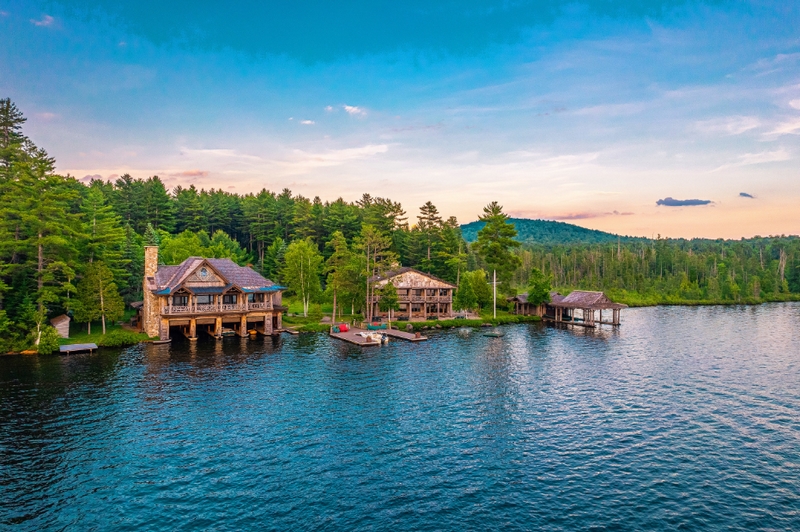 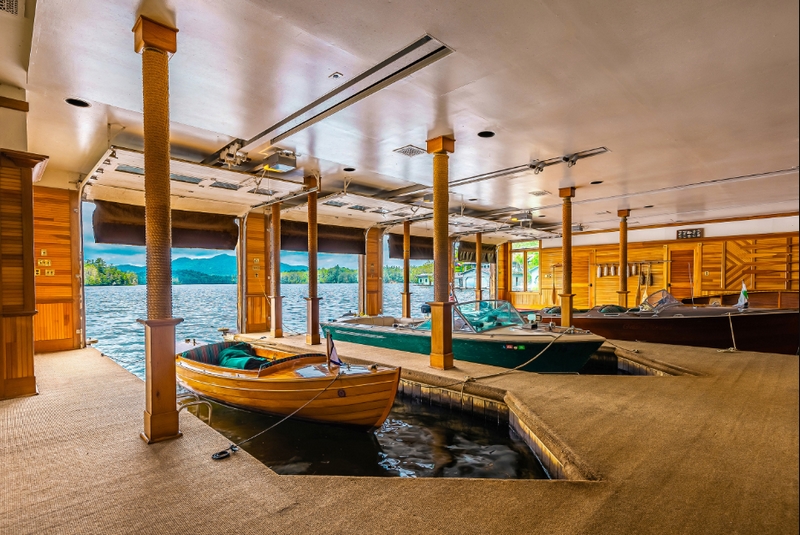 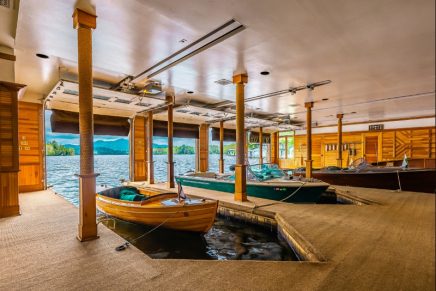 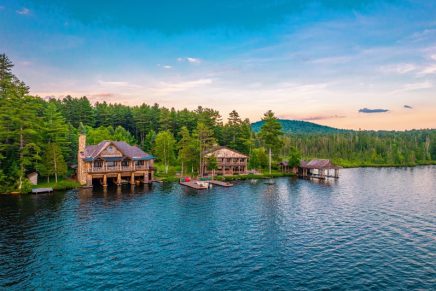 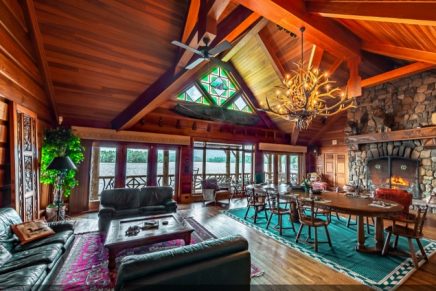 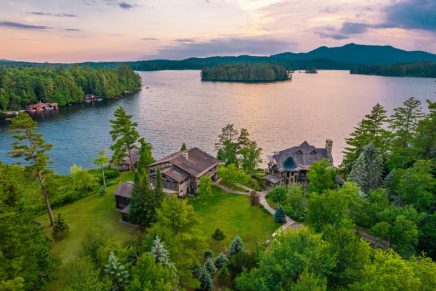 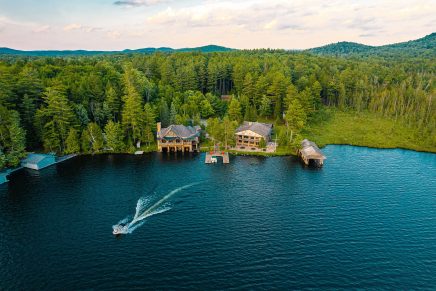