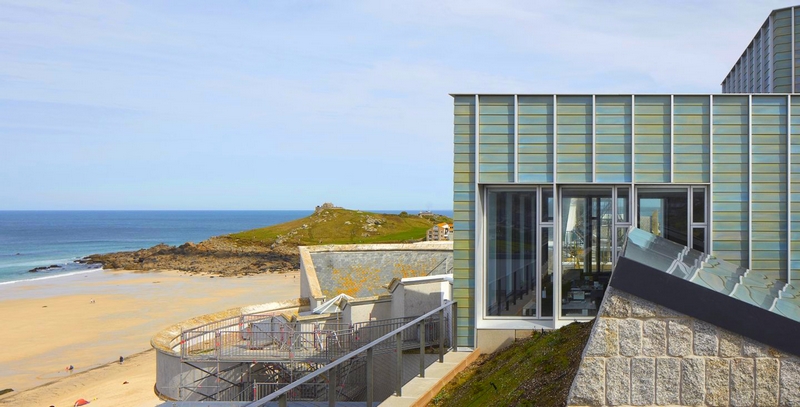 The elegant £20m extension of Tate St Ives, a gallery that was overwhelmed by its own success when it opened in 1993, has won the £100,000 museum of the year award, the most lucrative museum prize in the world.

The artist Melanie Manchot, one of the judges, said it had been “a profound experience” to visit after the work, which she believes has transformed the gallery.

“As soon as I walked into Tate St Ives I had an amazingly strong feeling that they’re doing something innovative. I’ve visited before, but now the whole building, the galleries, the views, all feel different – they have been given a new lease of life. The extension has not so much been an addition as a complete reimagining.”

Manchot was also impressed that, despite closing for 18 months for the work, the gallery had kept all its members and local guides, “which I feel speaks to a sense of belonging and a new St Ives so much more embedded in its community”.

Stephen Deuchar, chair of the judging panel and director of the Art Fund, which sponsors the prize, said: “Tate St Ives tells the story of the artists who have lived and worked in Cornwall in an international context. The new extension to the gallery is deeply intelligent and breathtakingly beautiful, providing the perfect stage for a curatorial programme that is at once adventurous, inclusive and provocative. The judges admired an architect and gallery team who devoted some 12 years to this transformational change, consulting with the local community all the way.”

The prize was presented at a ceremony at the V&A in London – 2016’s winner – by the artist Isaac Julien and Andria Zafirakou, who last year won the $1m best teacher in the world prize, which she is spending on arts education.

The St Ives gallery beat a strong shortlist, including the Ferens Art Gallery in Hull, which was completely refurbished in time for Hull’s term in 2017 as city of culture.

The other contenders were the Brooklands Museum in Weybridge, where the finishing straight of the world’s first purpose-built motor-racing circuit was restored; the Glasgow Women’s Library – the only one in the UK dedicated to women’s history – which has grown over 25 years from a shopfront with no funding to an award-winning resource in a listed building; and the Postal Museum in London, once a niche archive with 3,000 visitors a year, but now a purpose-built museum with a spectacular attraction in Mail Rail, the restored train that once carried post far below the capital’s streets.

Tate St Ives reopened in October 2017. Visitors surged back in, and there were 11,000 visitors over the opening weekend alone. The project involved refurbishing the original galleries, and adding an extension by Jamie Fobert Architects and the environmental engineering company Max Fordham.

The original museum opened in a town that had been famous for its artists, including Barbara Hepworth and Ben Nicholson. It was built on a spectacular but tight site, designed by the architectural practice Evans & Shalev directly overlooking the beach on the footprint of an old gasworks. In its first six months, there were 120,000 visitors; the gallery had planned for 50,000 visitors a year. Tate St Ives has since averaged 240,000 visitors annually, swamping the gallery spaces, overwhelming the shop and other visitor facilities, and causing queues down the stairs for the rooftop cafe. The whole gallery had to be closed every time a new exhibition was hung.

The original proposal to extend produced a rash of “Stop the Tate” posters in windows throughout the town, and protests about everything from property prices being driven up by arty incomers to the loss of parking spaces.

After extensive public consultation, the architects’ eventual solution was to double the gallery space by excavating into the hillside behind the original building – which drove up the cost to £20m from the original estimate of £12m.

• This article was amended on 6 July 2018 to include the other company that was involved in the 2017 extension with Jamie Fobert Architects, Max Fordham.