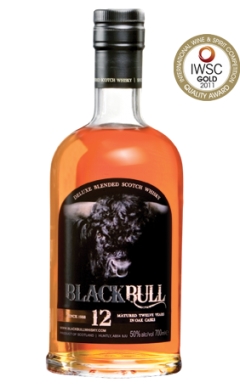 This incredible achievement saw Black Bull go up against 40 of the world’s leading whisky brands, both luxury and affordable.

Independently rated and tasted blind by a renowned panel of whisky experts, Black Bull was again recognised as the very best in its field. The announcement of the award makes 2011 a quadruple gold medal year for Black Bull whisky, coming on the back of successes at the World Whisky Awards and the International Wines & Spirits Competition in April and August respectively.

The Scottish Field Whisky Challenge is an annual competition celebrating the very best the whisky industry has to offer. Each year, a panel of experts takes part in a series of rigorous blind tastings to recognise the finest products on the shelves today.

Duncan Taylor Scotch Whisky selects whiskies from distilleries throughout Scotland, bottling a range of luxury single malt and grain Scotch whiskies as well as its award winning range of blended whiskies from its base in Huntly, Aberdeenshire.