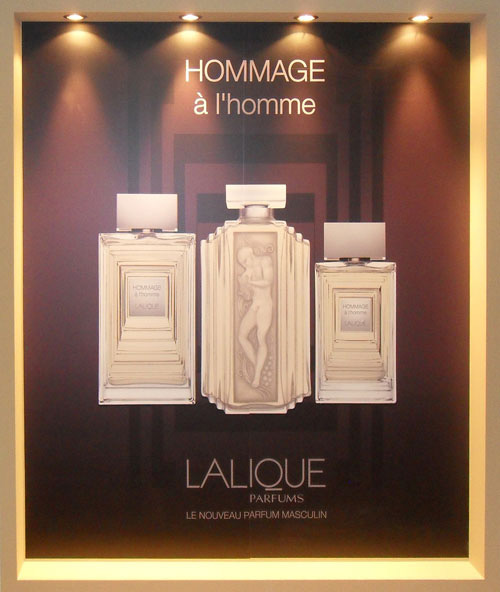 Lalique has a longue and beautiful history in providing precious crystals bottles for perfumes. For two decades Lalique is involved in the perfume business. To mark this anniversary, Lalique returned to famous Orient Express train – the perfect stage to launch Homage à L’Homme (Homage to Men) – the new woody “niche” fragrance for men developed by perfumers Christine Nagel and Mathilde Bijaoui.

In celebration of its 20th anniversary, Lalique is also reissuing the gold flacon “chèvrefeuille,”in a limited edition of 50 numbered pieces.

Lalique and Orient Express are bound together by historical memory. In 1929, René Lalique decorated several of the legendary train’s wagons and his grand-daughter Marie-Claude launched in 1992 the first Lalique’s feminine scent – Lalique de Lalique.

To the delight of enthusiasts and collectors, Lalique‘s masculinity tribute is available in two bottles – one from crystal (priced at  1200 euros) and one in glass (retailed at 65 euros for 50ml/). The crystal recipient has a sculpted Pan-pipe man, referencing to the original sculpture made by René Lalique for the Orient Express in 1929.