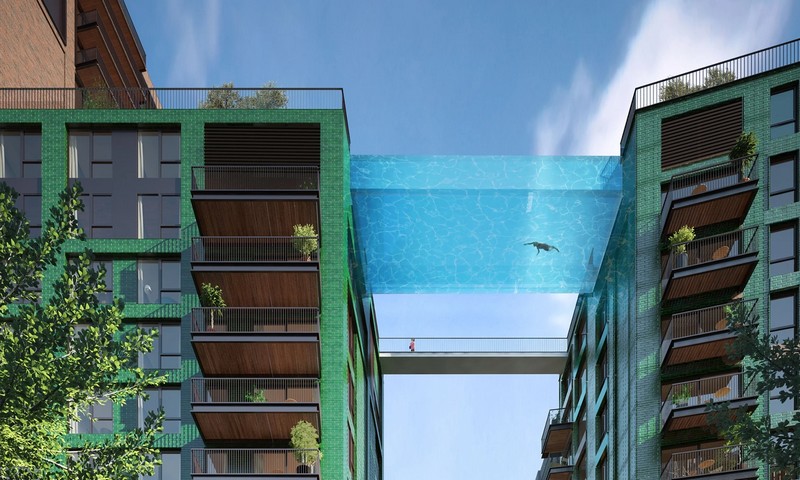 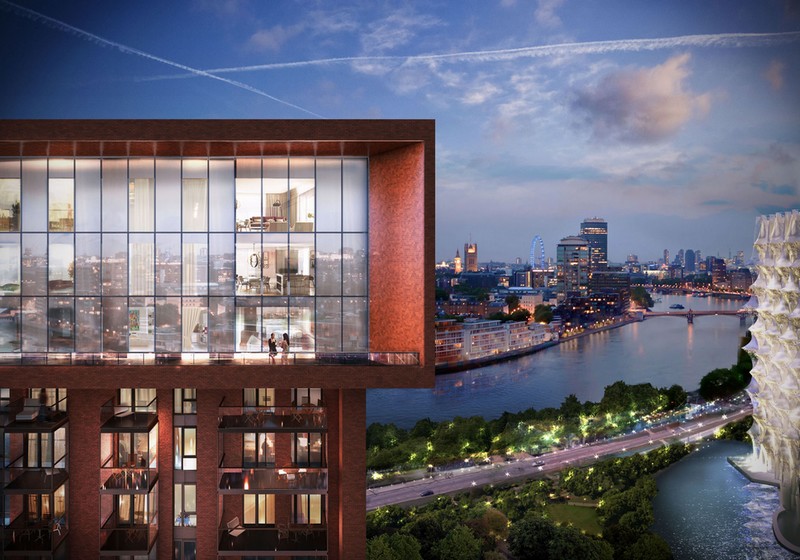 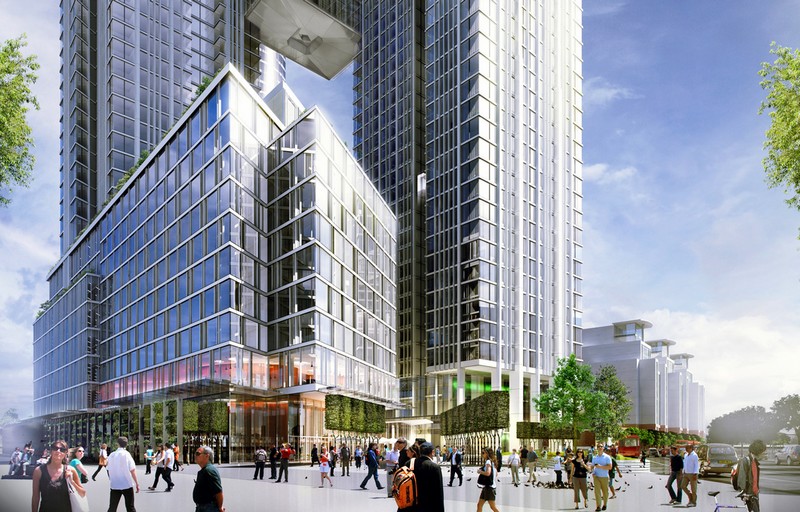 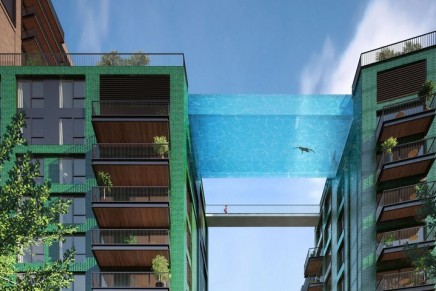 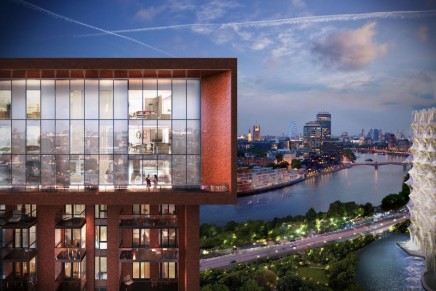 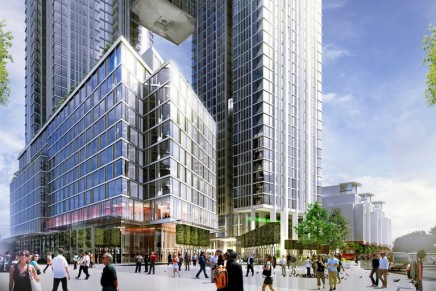 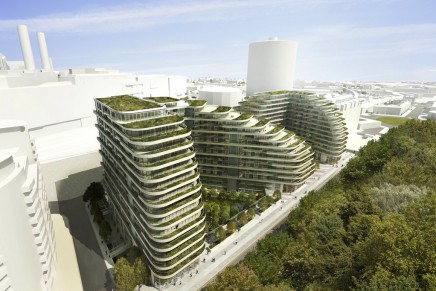 This article titled “The new Nine Elms might be a rich man’s playground, but I hope it works” was written by Deborah Orr, for The Guardian on Friday 28th August 2015 16.00 UTC

A little square mosaic plaque has been concreted on to a wall opposite the large cuboid glass US–embassy-to-be. It’s a portrait of Edward Snowden, inscribed with the legend: “Thanks for the truth.” As graffito goes, it’s pretty classy: reproachful yet well-mannered. How long it will survive is anyone’s guess.

The staff of the current embassy building, in Mayfair’s Grosvenor Square, are said to be pretty hostile to the move south of the Thames, despite this little welcome, patiently awaiting their arrival in 2017. This is a bit rich. It’s hard to imagine how an embassy relocation could ever have been made more alluring.

The structure itself looms in an imposing position, right by the Thames as it turns at Vauxhall towards Battersea. The new US embassy will be a landmark building, part of a vista that says, “London”. Purpose-built to provide the best possible security, the building boasts a half-moat, a novelty even in the capital.

The peregrinations of the embassy’s allegedly reluctant workers will be smoothed by the construction of a new tube station on its doorstep and a footbridge across the Thames to Chelsea. If, that is, they haven’t managed to bag a flat in Embassy Gardens, a residential development next door with a handsome design based on New York’s Meatpacking district.

To add to the New York vibe, New Covent Garden, stretching behind the development, is going to be rebuilt. Currently, it is a vast no-go area that the residents of Stockwell have to skirt to get to the river. (Except on Sundays, when there’s a huge, rough-and-ready market, which will be greatly missed by its many loyal customers.) In its reincarnation, New Covent Garden will court the public with a posh food market that people will be able to drift into from the “linear park”. Because there will be a linear park, too – a park longer than it is wide, a park that is also a route, snaking prettily past the embassy as it makes its way from Vauxhall Bridge to Battersea power station, which will also be on the new tube line.

The new embassy is the southern prop for the huge Vauxhall Nine Elms Battersea development, which is really more than 30 separate developments, and which, it is promised, will turn this almost invisible light-industrial area into a new, fantastically glamorous, central London quartier.

The northern prop is, of course, the power station, which has had only three chimneys for a while, as reproductions are made to replace all four. On the river, in front of the power station, a number of new public squares will be created, one of which will be called Malaysia Square, in honour of Malaysia’s historic links with the UK. I don’t suppose I’m the only person who finds this a little bit weird.

Between the two developments are lots of other developments, forming what can only be described as an architect-off. A building from Norman Foster will jostle next to one from Frank Gehry, which will rub shoulders with one from Richard Rogers. When a famous architect can’t be procured, a famous designer is recruited. One block of flats boasts interiors by Philippe Starck, another fittings by Donatella Versace (kill me now). There’s also a hyper-luxury Chinese hotel going up, with a block of flats next door that will have full access to the hotel’s amenities, including room service.

These last projects are all part of the Vauxhall tall buildings cluster, which will allow the embassy to look out on to a simulacrum of the downtown area of a US city. But more dense. Nice for them. Not so nice for the long-standing residents of the area, who will wake up one day to find that street level is crepuscular enough for them not really to know if they have woken up one day or one night at all. Still. Progress.

Needless to say, stuff such as social homes, schools and whatnot are thin on the ground, although there will be one public swimming pool. (There will be a highly visible private one, too: an all-glass bridge filled with water, which has been described as “genuinely crackers”.) Let’s just say that in its own special way, this part of town is saying “No” to austerity.

Yet, rich man’s diplomatic playground as the new Nine Elms is conceived as being, it’s hard not to feel a tiny bit optimistic about it. It helps that very few people lived on this land before, and the sort of lowland clearances seen in other parts of London aren’t happening on any great scale here. (Some tenants in short-let council homes have been rehoused, though.)

Actually, it always did seem strange that a chunk of central London, by the river, was basically an industrial estate, with access to the river itself extremely sporadic. And the long-running saga about the redevelopment of the power station, which rotted and decayed as it increased in value, guarding its own private stretch of the river against all-comers, is at least coming to some kind of resolution, for better or worse.

It’s going to be sad to see some landmarks going. I always loved Keybridge House, a concrete and aluminum chunk of modernism that featured in the finale of the last series of Luther. Keybridge House was, like New Covent Garden, a cordoned area that was impenetrable to the public. Nice building. Terrible relationship with the area it was planted on. It was supposedly the BT exchange that phones tapped by MI6 were routed through.

Who knows? This area is crammed with spy-lore. Tingatel House up by the river is supposedly where the real spies still are, while the Terry Farrell-designed official headquarters is more of a James-Bond accoutrement. Either way, British intelligence and the US embassy are now tremendously handy for each other and probably currently being linked by underground corridor. One hopes.

Many locals have a fondness, too, for the Victorian building that used to be a bottle factory, which is now a self-storage outfit but will soon be a pile of rubble and one day a showcase for Donatella’s baubles. If I got to choose one building to be saved, it would be this one.

The building actually being saved, however, is the Vauxhall transport interchange, which looks like a tuning fork that’s had a run-in with Uri Geller, was resisted passionately when it was first built, a decade or so ago, and is now so beloved that the developers have decided to work round it. It’s going to be so dark and windy down there at the foot of the cluster that the thousands of petitioners may yet regret their victory.

Like the rest of us, they’re just going to have to wait and see. It’s possible that the new Nine Elms will be dynamic and interesting, worthy of affection or even love. It’s also possible that it will be a place with more money than sense, empty investment flats making it sterile, creepy and repugnant. While I understand that property developers are the great Satans of our time, and that success for this area means success for them, I’d still very much prefer the first option.