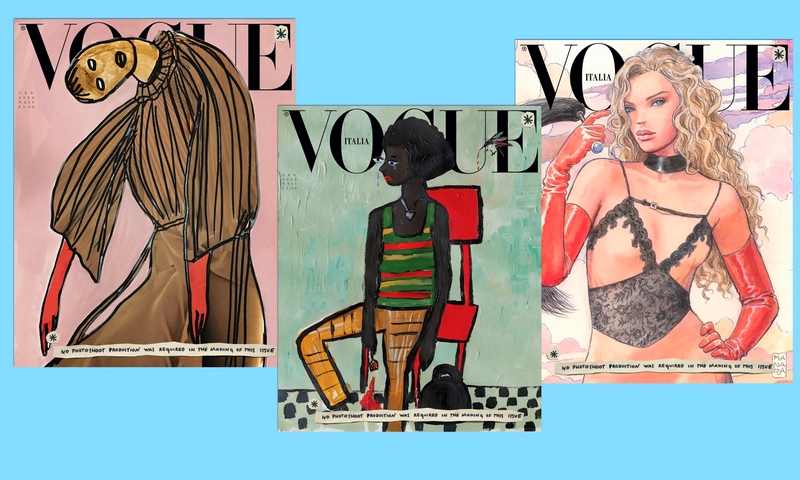 Vogue Italia will not feature any photoshoots in its January 2020 issue in a bid to make a statement about sustainability. The move is intended to highlight the environmental impact of photoshoots in print magazines.

In his editor’s letter, Emanuele Farneti listed some of the resources it took to fill the September 2019 issue, the biggest of the year, with original photographs: “One hundred and fifty people involved. About 20 flights and a dozen or so train journeys. Forty cars on standby. Sixty international deliveries. Lights switched on for at least ten hours nonstop, partly powered by gasoline-fuelled generators. Food waste from the catering services. Plastic to wrap the garments. Electricity to recharge phones, cameras … ”

The eight illustrated covers for the issue, which will hit newsstands on 7 January, will feature work by different artists depicting real-life models wearing Gucci. Each one will read: “No photoshoot production was required for the making of this issue.”

On one cover the Mozambican-US painter Cassi Namoda has painted the model Ambar Cristal Zarzuela crying, a mosquito dripping with blood buzzing near her head. The Dutch model Felice Nova Noordhoff is shown on a cover by the Italian artist Paolo Ventura as wearing a fringed pink and metallic gold top and green eyeshadow, while Japanese artist and character designer Yoshitaka Amano has drawn model Lindsey Wixson in a thick black choker.

Manara’s cover, according to Farneti, was inspired by Michelangelo’s David. He told the New York Times that while there was discussion about whether it was right to “bring back eroticism on the cover of a women’s magazine … at the end, we decided that the girl is so in control”.

There is bound to be criticism of the move away from photo shoots as a cynical bid to try to keep up with the debate around the global climate emergency, particularly given the replacement of them with illustrations is a one-off. Farneti told the New York Times: “I think that the most honest way to face a problem is starting by admitting it. That was our way to say that we know we are part of a business that is far from being sustainable.”

The move follows a global mission statement by Farneti and the 25 other international Vogue editors in December that articulated the titles’ “shared commitment” to “practices that celebrate cultures and preserve our planet for future generations”.

Italian Vogue will be one of the first of Condé Nast’s international publications to use 100% compostable plastic wrapping in 2020.