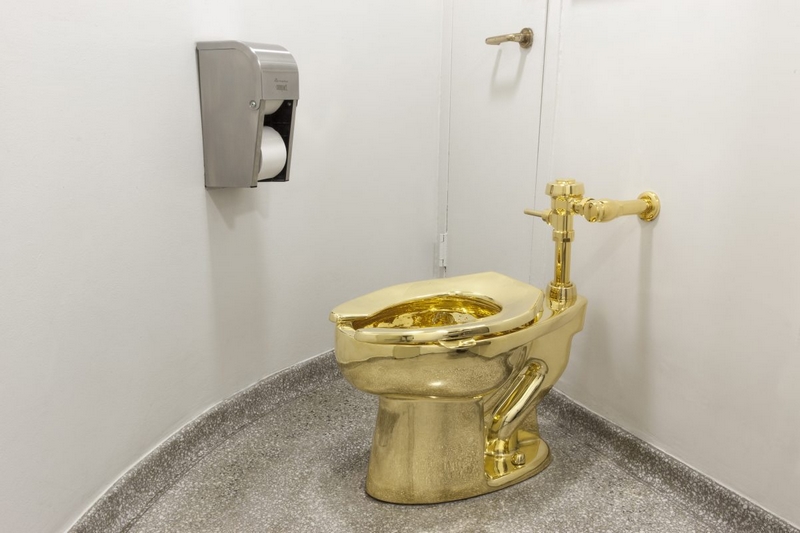 This article titled “Flushed with success: solid-gold toilet to be installed at Blenheim” was written by Mark Brown Arts correspondent, for The Guardian on Friday 3rd May 2019 05.00 UTC

A solid-gold toilet is set to be installed in one of the UK’s grandest country houses this autumn. And, yes, people will be able to use it.

The 18-carat gold artwork, America by Maurizio Cattelan, made headlines in the US after the Guggenheim offered it to Donald Trump instead of the Van Gogh painting he requested.

It will be plumbed into a bathroom at Blenheim Palace in Oxfordshire, near the room in which Winston Churchill was born. Visitors will be able to admire and use the toilet, an experience that will be new even to the Marlborough family who have enjoyed lives of luxury at Blenheim for more than 300 years.

“Despite being born with a silver spoon in my mouth I have never had a s.h.i.t on a golden toilet, so I look forward to it,” said Edward Spencer-Churchill, the current Duke of Marlborough’s half-brother and founder of the Blenheim Art Foundation. “It will be an installed, working, usable toilet.”

There will be enhanced security, Spencer-Churchill said, but whether there will be a queuing system or booked slots has yet to be decided.

And there is the question of how long people can stay in the toilet. “I’m not sure I can answer that question yet,” he added. “We’d like people to enjoy their time in there without giving them too much time, if that makes sense.”

When the artwork was installed in the Guggenheim in New York in 2016 people queued for about two hours before being allowed in one at a time. Cleaners sanitised the toilet every 15 minutes. An estimated 100,000 people visited the installation and posted a blizzard of selfies and toilet humour on Twitter.

The Guardian’s Adam Gabbatt was one of the first to use the toilet. He wrote: “The surface proved forgiving on the rear of the thigh and once the procedure was complete, the flush worked like a charm. The golden toilet was able to handle solids.”

Cattelan made the artwork before Trump’s political rise but given the US president’s love of excess and golden chairs, connections have been made.

When the White House asked the Guggenheim to loan a Van Gogh for the president’s private living quarters, the museum reportedly declined, and offered the golden toilet instead.

Spencer-Churchill grew up at Blenheim surrounded by amazing things “but the art never really grabbed me in an emotional sense”. He said he fell in love with contemporary art and found it “intellectually odd” that it was exhibited in white-cube galleries, while the art in country houses stopped at the 20th century. “You wouldn’t have contemporary without the history and at the time all the historic art was contemporary too. At one time, probably still is, Blenheim was considered quite vulgar and ostentatious.”

Positioning the golden toilet opposite what is known as Winston Churchill’s birth room was coincidence, although Spencer-Churchill thinks his distant relative would have found it amusing. “He definitely had a sense of humour and he definitely had a joy of life.”