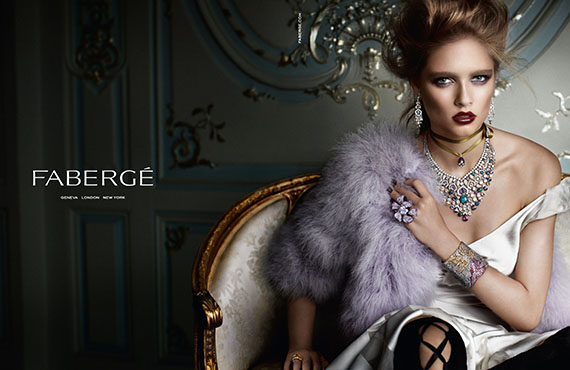 The campaign was led by Fabergé’s Managing and Creative Director, Katharina Flohr, who collaborated with Mario Testino, Carine Roitfeld, and producer Camilla Johnson-Hill.  This dynamic team had worked together only once before, in 1998, for the launch of Russian Vogue. The team selected Bee Gee, the Russian-Lithuanian rising star and model sensation, to embody Fabergé today, fusing Russian and Western cultures, past and present. This pioneering campaign, the first ever associated with the name, marks a new era of contemporary creativity for Fabergé.

The campaign captures the intense and emotive glamour and storytelling that characterises all contemporary Fabergé creations, and launches in the December issues of the major glossy titles in the UK, France, Germany, Switzerland and the US. Unfortunately digital media are not included in this first Fabergé ad campaign.