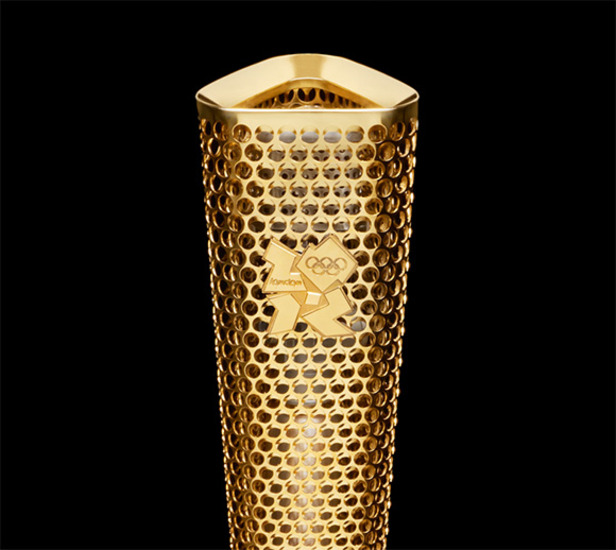 British design studio Barber Osgerby have won the Design of the Year 2012 for their stunning design of the London 2012 Olympic Torch. The overall winner was chosen from 89 entries to claim the winning title. The award, designed by Swarovski was presented by Anya Hindmarch at the awards ceremony held at the Design Museum.

The London 2012 Olympic Torch is not only a beautiful symbol of theOlympic Games but it also meets a demanding design brief. The aluminium made torch will be carried over 8,000 miles and is perforated with 8,000 circular holes, each representing a bearer who will run with the torch. Aside from being decorative, the holes also act to reduce the weight of the torch and prevent heat from the flame being conducted to the bearer’s hand.

Deyan Sudjic Director of the Design Museum said of the winning entry
‘Nothing is harder to get right than designing for the Olympics. The lightness and simplicity of Barber Osgerby’s London 2012 Olympic Torch does just that. The torch not only captures the spirit of London as Olympic host city but also demonstrates how design can celebrate traditional ideas in a modern way’.

7 Category awards were also presented at the ceremony:
The Architecture Award went to the London 2012 Velodrome.
The Fashion Award went to Issey Miyake 132.5 collection.
The Digital Awards went to Kinect by Microsoft.
The Transport Award went to the redesign of the Emergency Ambulance.
The Graphic Award went to Nokia Pure, a font design that can adjust to all languages.
The Furniture Category was won by recent RCA graduate Kihyun Kim for his balsa wood 1.3 Chair.

The London 2012 Olympic Torch along with the other shortlisted designs are currently on show at the Designs of the Year exhibition at the Design Museum, London until July 4.