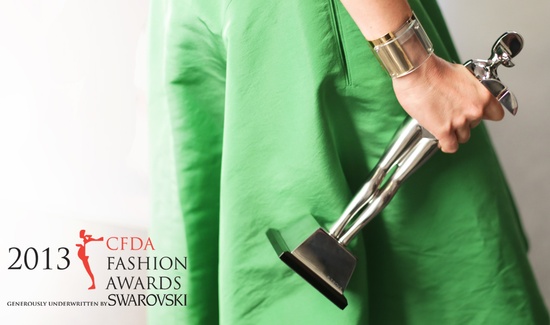 The Council of Fashion Designers of America (CFDA) paid tribute to the winners and honorees of the 2013 CFDA Fashion Awards and commemorated the organization’s 50th anniversary at Alice Tully Hall, Lincoln Center.

“Tonight we honored the best talent working in our industry today, and celebrated the indelible impact they’ve had on fashion; not only in America but throughout the world,” said CFDA President Diane von Furstenberg.

“A CFDA Fashion Award is one of the most coveted awards one can receive in our industry,” said CFDA CEO Steven Kolb . “This annual event is the one night we come together to celebrate our own.”

Recipients in each category will receive generous financial support from the company as well as exposure to the company’s vast and innovative crystal products and applications for fashion. The Geoffrey Beene Lifetime Achievement Award was presented to Vera Wang by Ralph Lauren for her consistent, creative influence on fashion.

The Media Award for excellence in journalism, originally created in honor of Eugenia Sheppard , was presented to Tim Blanks by Linda Evangelista.

Riccardo Tisci of Givenchy was recognized with this year’s International Award, presented by Jessica Chastain. The Board of Directors’ Tribute was given to Colleen Atwood by Ethan Hawke . Atwood is the first costume designer to be recognized by the CFDA.