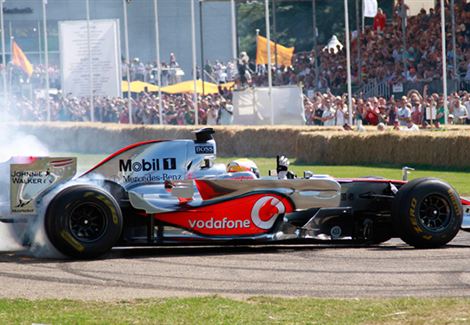 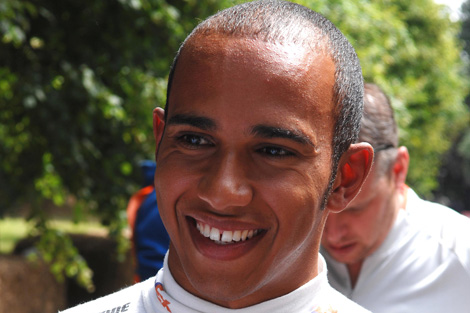 In just 2 weeks time the peace and tranquillity of Goodwood Park will be shattered by a gaggle of American racers and Pikes Peak specials as the 2012 Festival of Speed (28 June – 01 July).

The Vodafone McLaren Mercedes team will be one of at least six F1 teams attending this summer’s Festival of Speed, with both current team drivers Jenson Button (Saturday) and Lewis Hamilton (Sunday) due to attend the event and be in action up the famous Goodwood 1.16-mile hillclimb.

One of the Festival of Speed’s greatest moments will be relived at the this year’s event, when Nick Heidfeld is reunited with the very McLaren MP4/13 that he so famously launched to the Hill record of 41.6 seconds in 1999. The screaming V10 machine will be running for the first time since its glory at the Festival of Speed, and Heidfeld, now a hugely experienced Formula 1 star, will be sure not to disappoint. 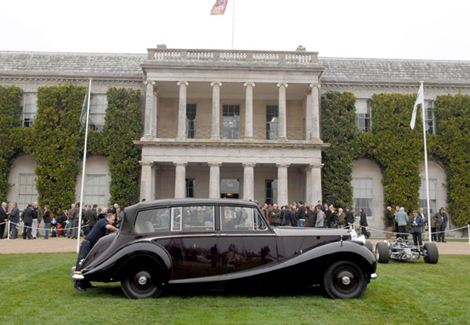 Royal Vehicle Concours
As a mark of respect to Queen Elizabeth II for her Diamond Jubilee, Goodwood & Cartier will gather together an astonishing selection of vehicles all personally owned or used by Her Majesty. These vehicles have never been seen in public together as a collection.

Many vehicles will come from the personal collections of Her Majesty, including Sandringham and the Royal Mews. Others will be sourced from overseas governments and private collections, and all will have a genuine use and connection with The Queen.

Formal state limousines and carriages will include Her Majesty’s 1961 Rolls-Royce Phantom V, modified specifically to fit on The Royal Yacht Britannia, a 1929 Daimler Double Six 30hp Brougham and a 1920 carriage from the Royal train. Foreign Travel will include cars used for overseas State visits, sent over to Goodwood specifically for the Cartier ‘Style et Luxe’ with official government permissions. These include the striking Chapron-bodied Citroen SM Decapotable used for The Queen’s State visit to France in 1972, with the release of this car being personally signed-off by the French President. Festival visitors will also see a special 1950 Lincoln Cosmopolitan ‘bubble top,’ plus a Humber Super Snipe used for Her Majesty’s first Commonwealth Tour.