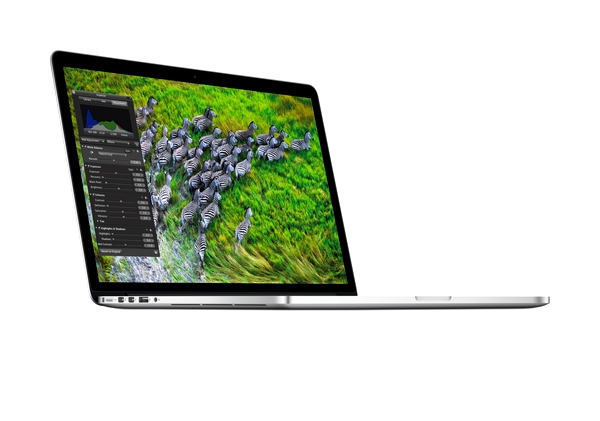 Apple unveiled an all new 15-inch MacBook Pro featuring a stunning Retina display, all flash storage and quad-core processors in a radically thin and light design. Measuring a mere 0.71 inches and weighing only 4.46 pounds, the new MacBook Pro Retina display is the world’s highest resolution notebook display with over 5 million pixels, 3 million more than an HD television. At 220 pixels-per-inch, the Retina display’s pixel density is so high the human eye cannot distinguish individual pixels from a normal viewing distance, so text and graphics look incredibly sharp. The Retina display uses IPS technology for a 178-degree wide viewing angle, and has 75 percent less reflection and 29 percent higher contrast than the previous generation.

The MacBook Pro with Retina display features the latest Intel Core i7 quad-core processors up to 2.7 GHz with Turbo Boost speeds up to 3.7 GHz, NVIDIA GeForce GT 650M discrete graphics, up to 16GB of faster 1600 MHz RAM and flash storage up to 768GB. Two Thunderbolt and two USB 3.0 ports allow pro users to connect to multiple displays and high performance devices, and a new HDMI port offers quick connectivity to HDTVs.

The MacBook Pro battery delivers up to 7 hours of wireless productivity, and uses advanced chemistry and Adaptive Charging technology to provide up to 1,000 recharges.