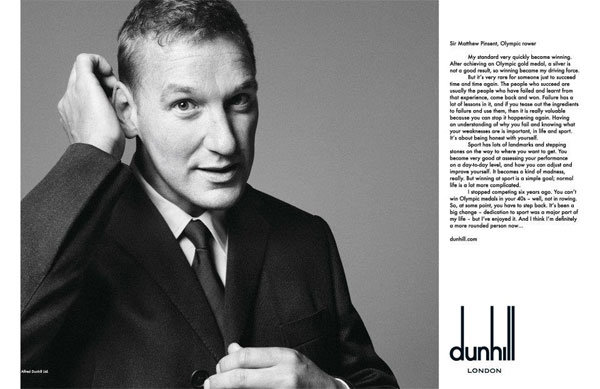 Team GB is destined to be one of the best looking team of athletes at the London 2012 Olympic Games.

With just over six months to go before the 2012 Olympics, British fashion and beauty brands are racing to nab the hottest athletes to be their ambassadors.

Dunhill is the latest British based label to snap up Olympians talents in its ‘Voice’ spring 2012 campaign.Olympic gymnast and medal hopeful Louis Smith is joined by Iain Percy, already a double Olympic gold medal sailing champion, and Sir Matthew Pinsent who has won four gold medal paddling to success with the British rowing team.

The Dunhill images shot by renowned photographer David Sims features each of the trio dressed in the finest English gentleman threads: Smith in a tuxedo, Percy in a coat with a knitted collar, and Pinsent in a suit and tie teamed with an overcoat.