As part of a multimillion pound upgrade, The Balmoral, a Rocco Forte hotel in Edinburgh, has revealed a new look for its finest suite. Led by Olga Polizzi, Rocco Forte Hotels‘ Director of Building & Design, and sister to Sir Rocco Forte, the Scone & Crombie is set to become one of the largest suites in Scotland thanks to an extensive refurbishment. 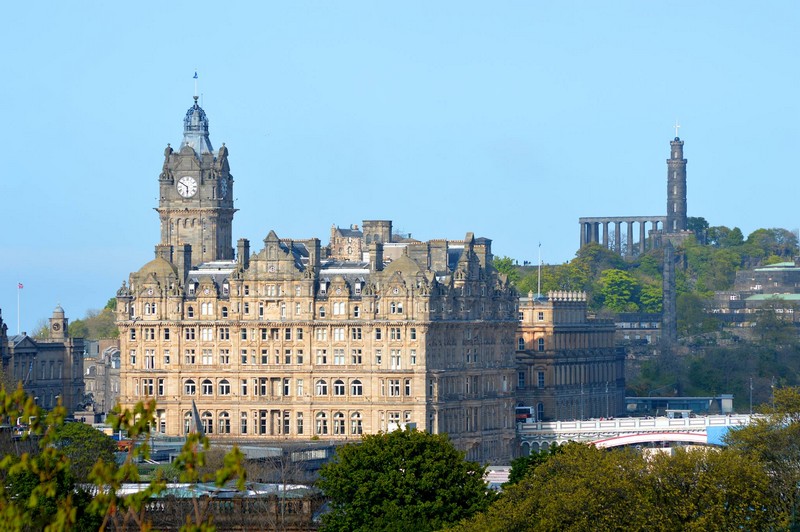 The Balmoral began life as a grand railway hotel in 1902, and over the last 115 years, the Scone & Crombie has been reserved for some of the most notable figures to frequent the hotel. Former guests include members of royal households and heads of state as well as Hollywood greats including Sophia Loren and Elizabeth Taylor.

“Named after the iconic Scone Palace in Perthshire, the signature suite has been designed as the ultimate city base for families or urban enclave for heads of state and VIPa,” explained the The Balmoral’s team. “The flexible accommodation – which stretches over 220 square metres – can be booked as a two or three bedroom suite. The addition of a sizeable entrance hall, meanwhile, provides the perfect location for discrete private check-ins and opens onto a multipurpose meetings and dining space,” added the luxury hotel. In the sitting room – with its working fireplace – a serene colour palette provides a restful foil for the scheme in which rich fabrics meet opulent furnishings. The Scone & Crombie costs around £5,500 per night including breakfast.”

“The Scone & Crombie is our grandest suite with high ceilings, beautiful cornices and grand fireplaces,” explained Rocco Forte Design Director Olga Polizzi. “The new scheme aims to highlight and accentuate the historical aspects of the room, whilst being comfortable, elegant and inspiring.”

One of the main talking points is the custom-made tapestry style wallpaper called Devonshire Swans. Selected by Polizzi for the entrance-dining room to celebrate “the Victorian grandeur of the building”, it has been printed for the first time on canvas paper by British fabric house Watts of Westminster to resemble a traditional tapestry. Known for creating large-scale statement pieces combining contemporary colours and historical designs, in this setting it promises to provide a striking nod to both the city‟s royal connections and the grandeur of the suite. 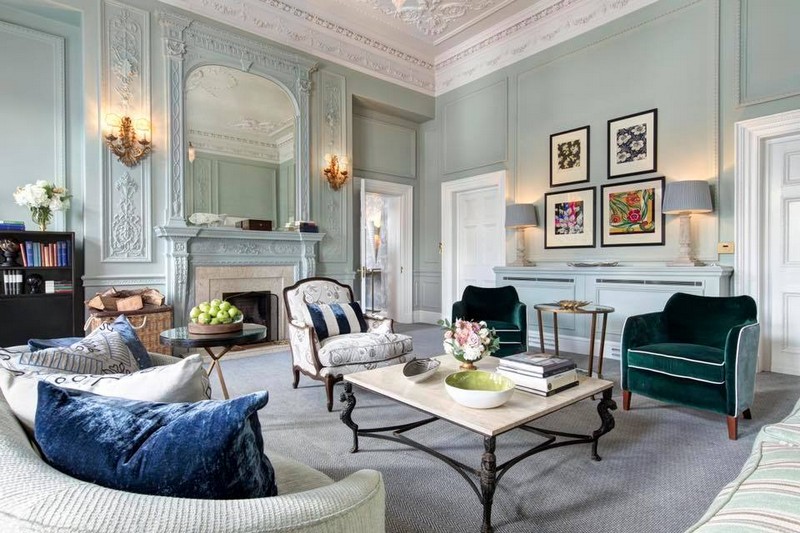 “When designing the new suite and rooms I tried to think „what is Scotland?‟ adds Polizzi. “This led me to the blues and greens that will be present throughout, reminiscent of the Scottish countryside, and this coupled with stripes and florals to give it a strong Scottish feel,” added Polizzi.

Standing for over a century, The Balmoral is one of Scotland‟s most recognised landmarks and its majestic clock tower dominates the capital‟s skyline, whilst its city views are some of the capital‟s most sought after. Focusing on these vistas, all 31 rooms and suites in the south wing that overlook the Old Town – that forms part of a protected UNESCO World Heritage Site – have undergone a restyle as part of a significant upgrade of the hotel that started in 2017. Bringing the Scottish landscape inside, these new-look Old Town rooms and suites embody a Scottish woodland theme that adds a touch of magic and romance to any stay in the city.

Rocco Forte Hotels also unveiled The Rocco Forte Suite Experience, a new concept across each of the 11 hotels, giving guests an indulgent stay from the moment of arrival to departure. As part of this, The Balmoral has created an exclusive cashmere turndown service for the Scone & Crombie with luxury Scottish cashmere brand Hawico.

Two new exclusive limited edition experiences – Scone & Crombie Land and Scone & Crombie Sea – have also been created for guests of the suite in partnership with Scotland‟s leading sporting and outdoor adventure specialists, Ossian. Offering unrivalled access to the finest sporting locations and private properties, Scone & Crombie Land will see Ossian founder, Ted Innes Ker, lead a VIP tour of his family home in The Scottish Borders – Floors Castle, seat of the Duke of Roxburghe and host a dinner in the Duke‟s Fishing Hut – located right on the banks of the River Tweed. Scone & Crombie Sea, meanwhile, offers guests the opportunity to escape the hustle and bustle of the city aboard a luxury boat and explore the historic islands and coastline of the Firth of Forth. Indulge in the finest seafood with a BBQ lunch in a rustic log cabin overlooking a vast sandy beach and across to the Bass Rock and May Island.

The Balmoral is also joining forces with culinary legends Alain Roux and his father, Michel Roux OBE, to open a new brasserie in May. Alain Roux, Chef Patron of The Waterside Inn, Bray-on-Thames, and his father, Michel Roux, O.B.E., legendary chef and restaurateur, are set to launch an exciting new restaurant in Edinburgh at The Balmoral during May 2018. 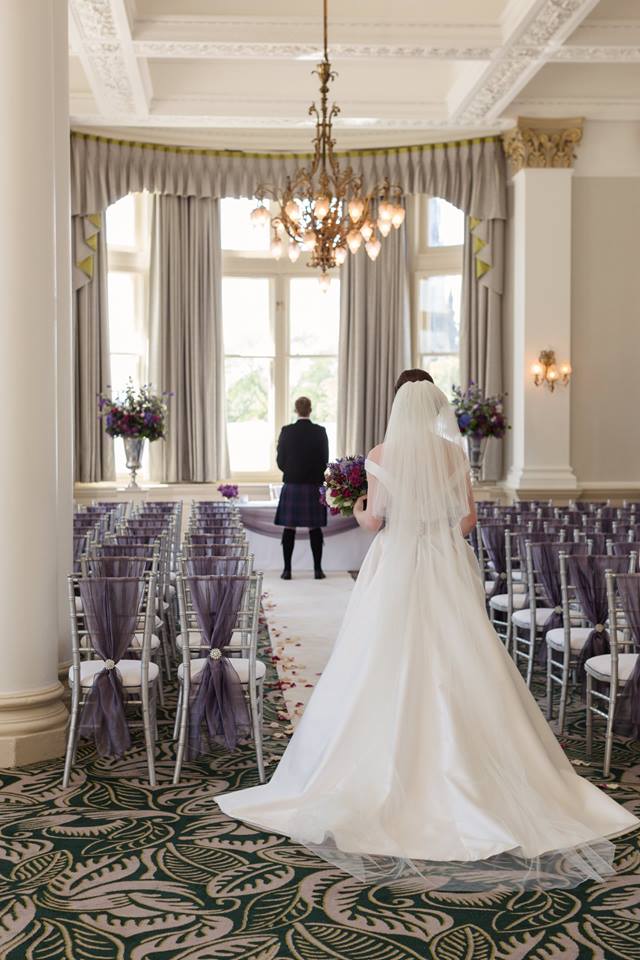 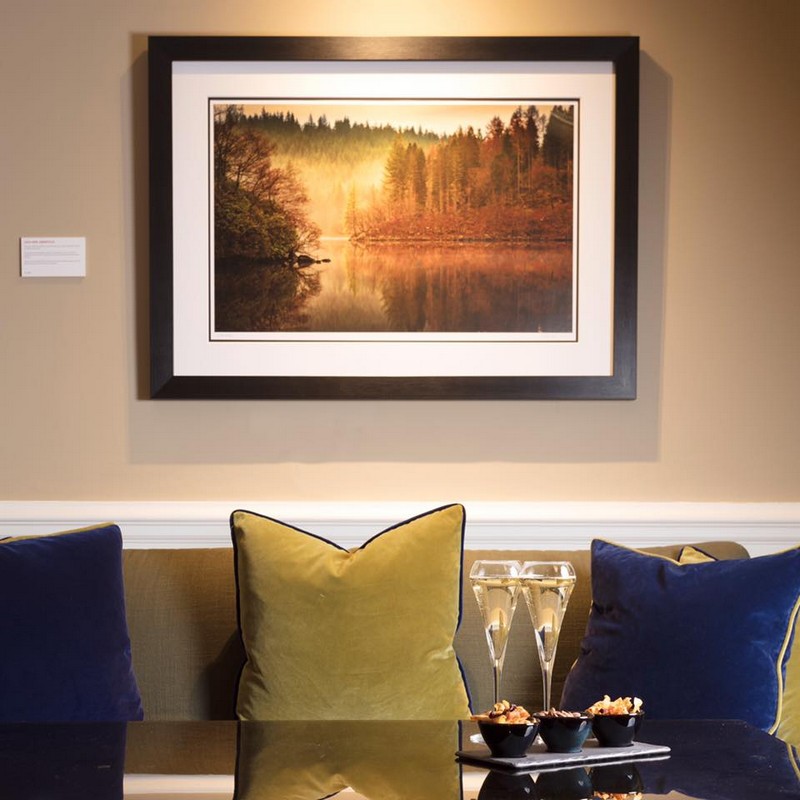 The Balmoral Hotel’s walls are adorned with photography by Shahbaz Majeed; photo: roccofortehotels.com/hotels-and-resorts/the-balmoral-hotel/ 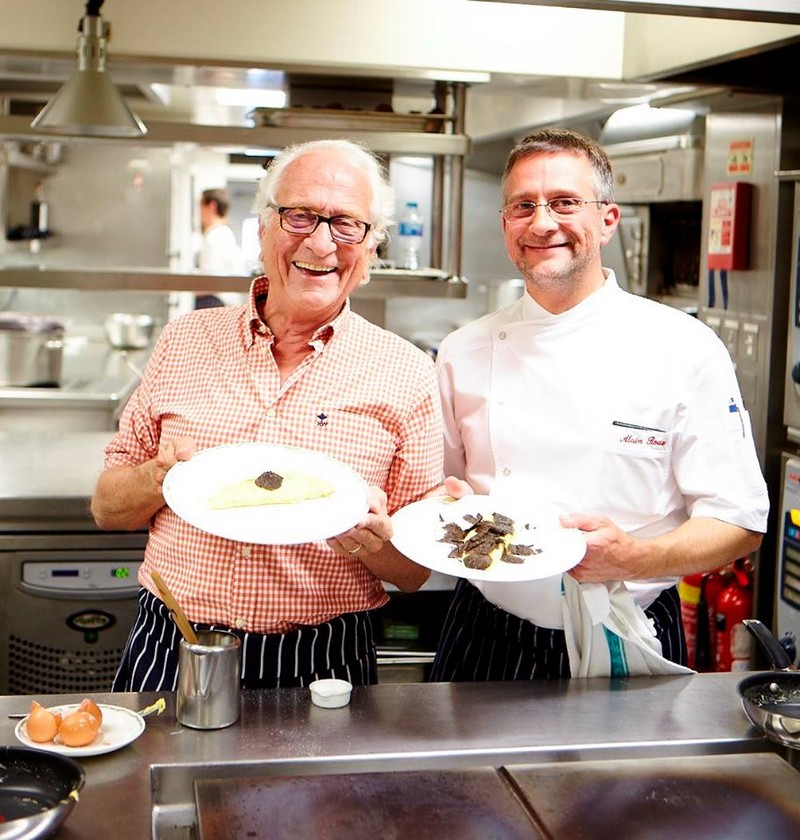 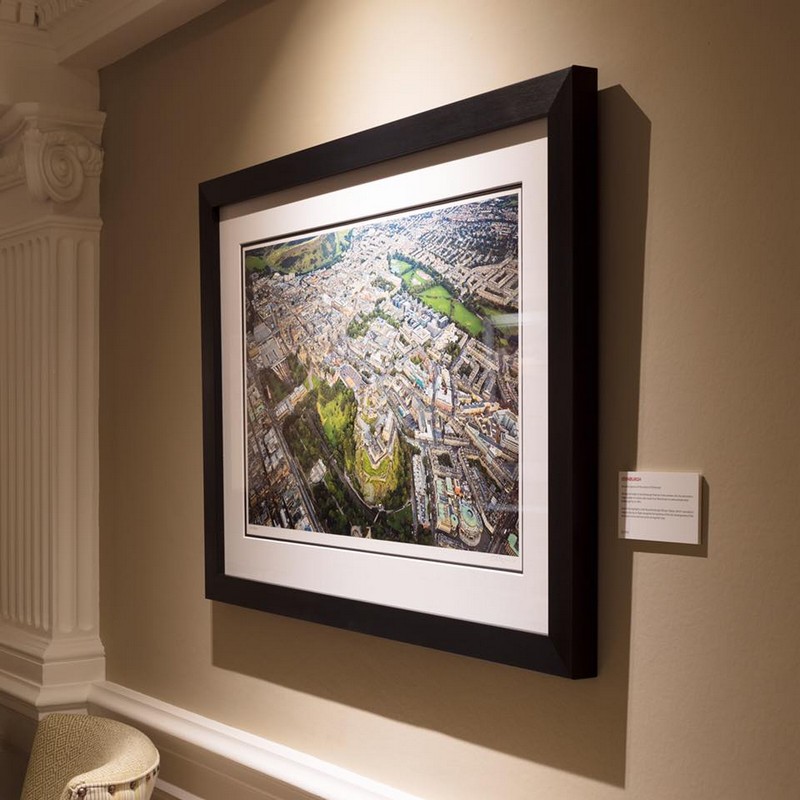 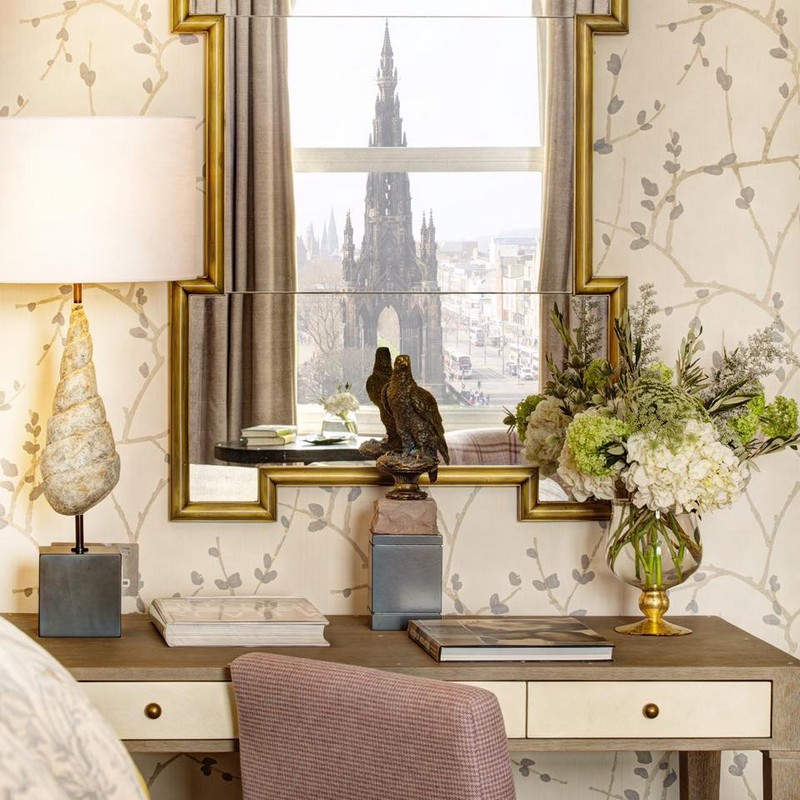 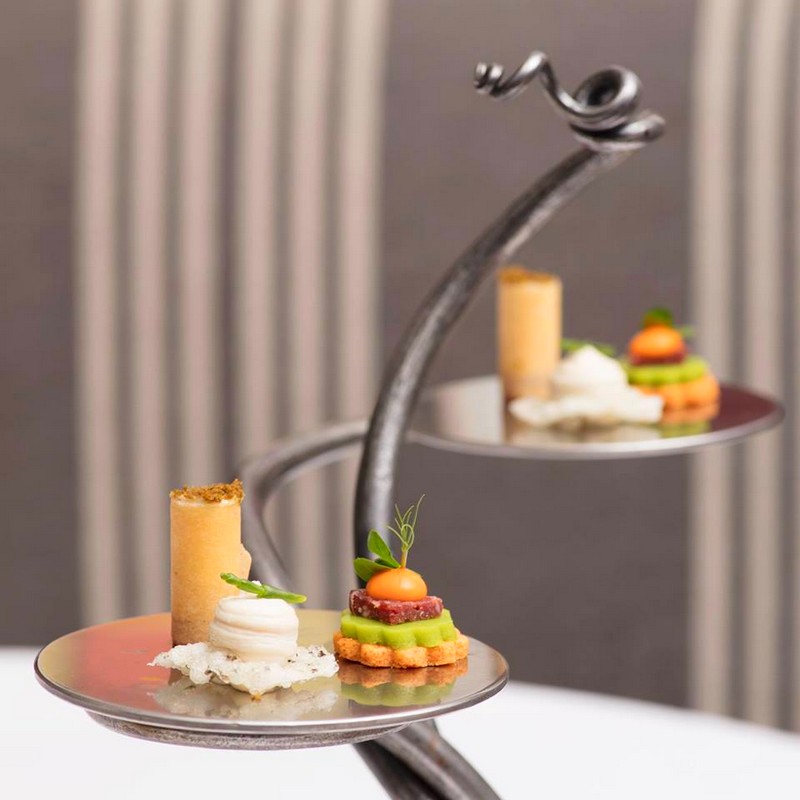 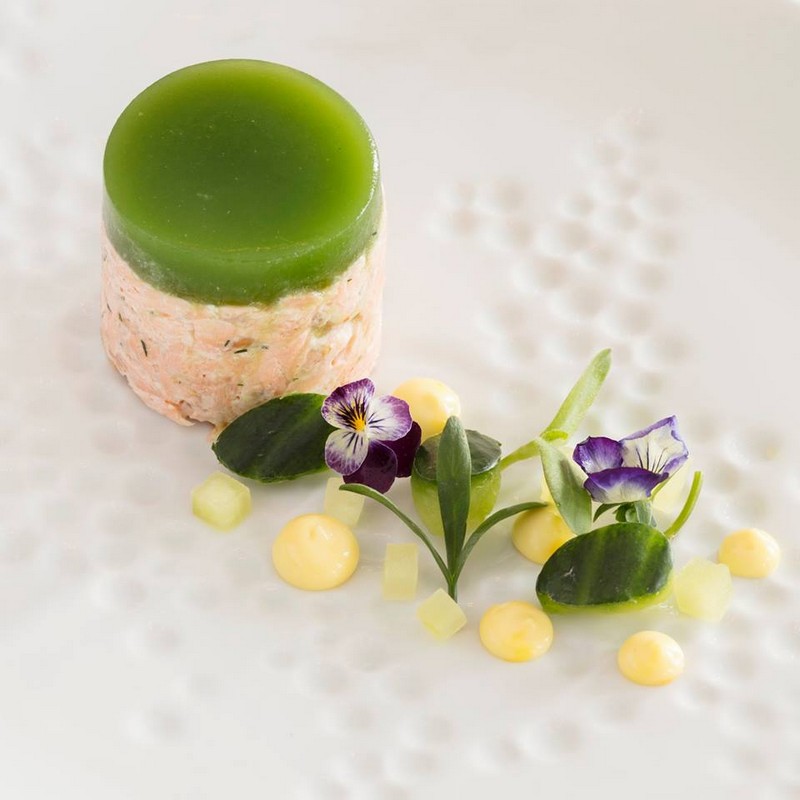 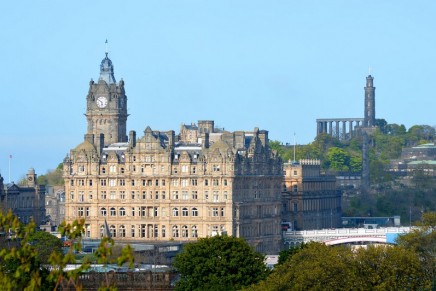 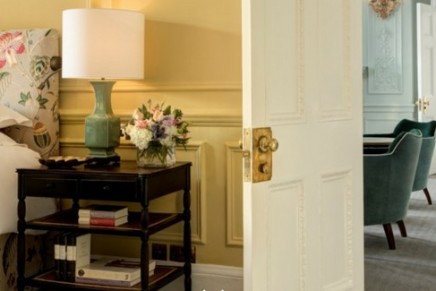 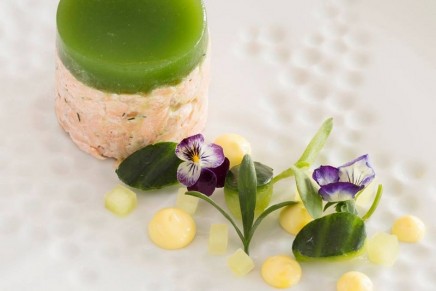 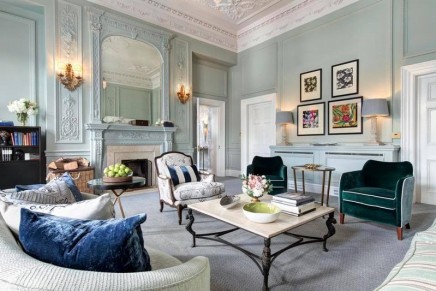 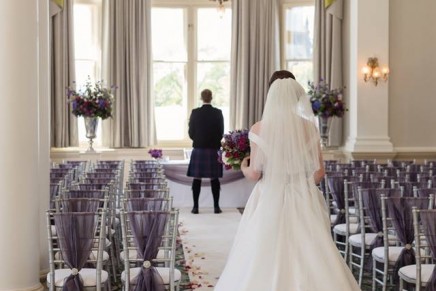 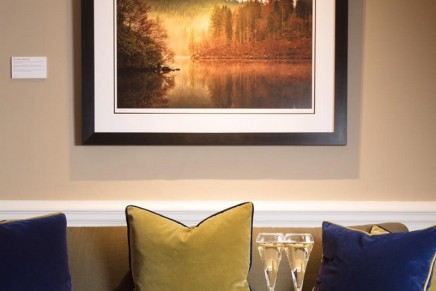 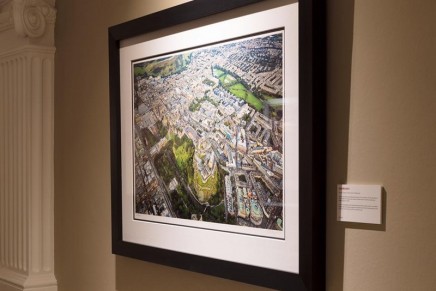 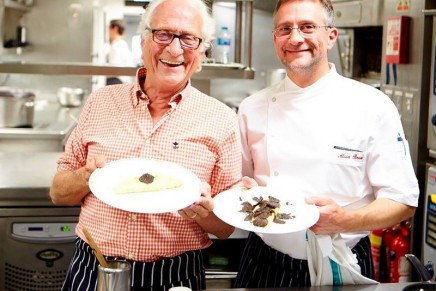 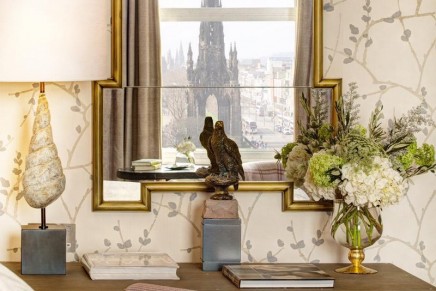 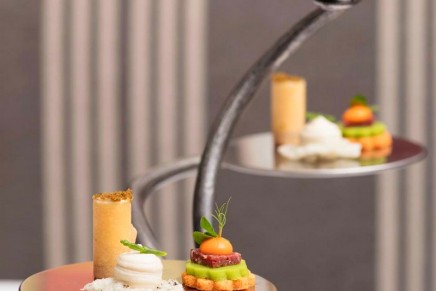