Never stop seeing wonder in life and all its possibilities.

Through the beautiful tale of Petit Prince and the Fox, we’re reminded to never stop seeing wonder in life and all its possibilities. The story of the little prince beautifully illustrates the power of the art of writing.

Writing is a gift, one that is passed from one generation to the other with a positive message.

To celebrate the power of imagination and the importance of transmitting ideas and values to the ones we love, Montblanc is releasing a special edition Meisterstück inspired by the much-loved literary character of Antoine de Saint-Exupéry’s Le Petit Prince. One of the world’s most translated books with editions in more than 250 languages and dialects, the allegorical story about the chance encounter between a pilot and a little prince from a distant planet explores the universal themes of imagination, open-mindedness and the value of human relationships.

With design elements based on Saint-Exupéry’s sensitive hand-drawn illustrations, the Montblanc Meisterstück Le Petit Prince captures the book’s simple message that transmitting one’s dreams and values to others is what makes one’s life meaningful.

The first series of Montblanc Meisterstück Le Petit Prince edition features the inspiring and tender characters of the young prince and the fox who enlightens him about the importance of close bonds and human relationships, revealing the core wisdom learned from his own life’s experiences. Subsequent editions will highlight other characters from Le Petit Prince and the powerful messages they carry including the aviator and the planet.

The delicate character of Le Petit Prince is immortalised along with his friend the fox, engraved on the handcrafted 14K rhodium-plated nib. A sentence from the original novel has been laser engraved into the crown of the luxury writing instrument available as a Fountain Pen, Roller Ball and Ballpoint Pen: “Créer des liens? … Tu seras pour moi unique au monde” (“To establish ties? … To me, you will be unique in all the world.”)

Meisterstück Le Petit Prince Doué Classique Edition pairs the deep blue colour of the lacquer barrel with the luminosity of a platinum-coated cap elegantly decorated with engravings of the fox pattern. The shiny surface of the platinum is repeated on the metal cone, cap and the pen clip adorned with the yellow star. Available as a Ballpoint Pen, a Roller Ball and a Fountain Pen with an 18K bi-colour nib embellished with the outline of the Little Prince and the fox. The fox pattern covers both the cap and barrel of the Meisterstück Le Petit Prince Solitaire, engraved on the deep blue lacquer. Contrasting with the blue, the fittings are crafted from platinum-coated metal. At the summit of the edition, the Montblanc emblem is encircled by the fox’s words about human bonds, taken from St Exupéry’s novel.

Pablo Picasso locked himself in his studio. F. Scott Fitzgerald relied on gin to spark his inspiration.Truman Capote was only able to think when he was lying down.Antoine de Saint-Exupéry inspires the new Petit Prince Collection. Read more about it on the Montblanc Magazine. Read about techniques Antoine de Saint Exupéry and other authors used for inspiration.

In 2014, Montblanc paid tribute to the famous British author Daniel Defoe and his epic masterpiece “Robinson Crusoe”. With its delicate ornaments and the elaborately decorated clip in the shape of a feather is reminiscent of Crusoe’s loyal friend „Poll“, which is found as a fine engraving on the nib. 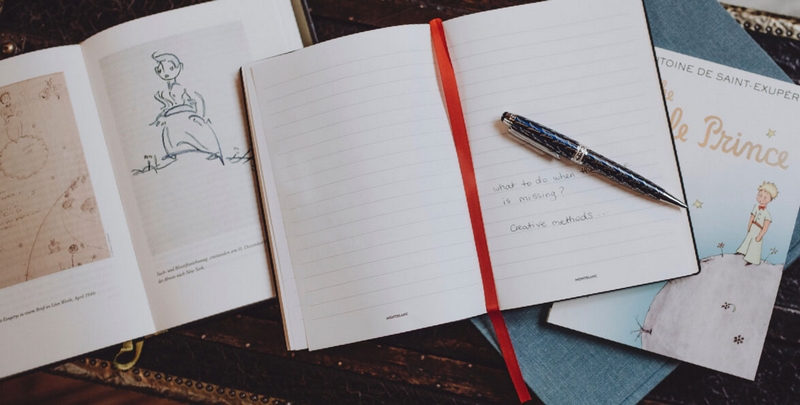 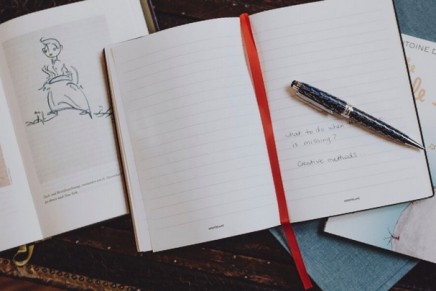