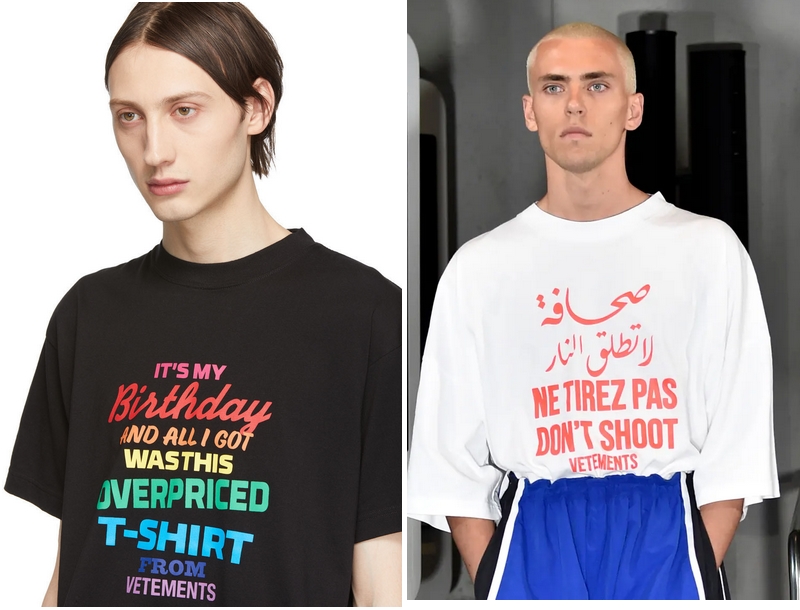 Trend-setting label Vetements has been criticised for featuring a T-shirt that read “Don’t shoot” in Arabic, French and English, at its spring/summer 2020 show last week. The T-shirt is a semi-replica of one originally worn by journalists in Lebanon during the Israeli invasion of the country in 1982.

Vogue Arabia has accused Vetements of “instigating regional upset”. While on social media, some have criticised the brand for using a T-shirt with links to a war in which thousands were killed. As one Twitter user put it: “This war is the primary reason why I had to leave Lebanon to the US then Canada. And Vetements thinks it’s a fashion piece?” Another put it simply: “Ugh vetements.” The brand did not immediately respond when asked to comment.

For others, the criticism has focused on the fact that the French fashion brand has followed in the footsteps of fashion label Qasimi, which, in 2018, also created a replica of the T-shirt. The Emirati designer behind the London-based design said at the time: “This T-shirt was something very personal to me … We’ve reworked it to highlight issues of the Middle East and what’s happening in the Middle East at the moment.”

The Vetements T-shirt was part of a collection that toyed with ideas of consumerism and late-stage capitalism, sometimes uncomfortably close to the line. The show itself, from a brand that relocated to Zurich in 2017, took place in Paris’s biggest branch of McDonald’s, which had not long ago been targeted by French anti-government gilets jaunes protestors. Models wore name stickers saying: “Hello I am capitalism”; tops riffed on the World Economic Forum logo, reworked to read: “Global Mind Fuck” and hoodies featured PlayStation logos reworked to read “Paystation”.

Vetements designer Demna Gvasalia is no stranger to the bootlegged look, having produced a now infamous T-shirt in 2016 with the DHL logo on it. While, in his role as head designer of Balenciaga, he has played with the design of the Ikea Frakta bag and referenced the carrier bag design of German supermarket chain Edeka. But international courier companies and Swedish furniture stores are a different beast to a T-shirt that for many will have associations with war.

Fashion activist Samar Seraqui de Buttafoco took to Instagram to call out what she sees as the “business activism” of Vetements. “This is not about cultural appropriation,” she explained over the phone. “For me, it is culture bashing.” According to the Palestinian-Lebanese style blogger and former political journalist who is based in Paris, Vetements designer Demna Gvasalia “has the right to be interested by what happened in the Middle East and put it in the light”. The problem, she says, “is that he’s denigrated our culture because he’s taken the ‘Don’t Shoot’ T-shirt from another less famous designer … it isn’t the problem of doing business with our history, but you have to be respectful.”

Speaking to Vogue Arabia, Al-Qasimi, who does not own copyright for the phrase, said: “I understand what they are doing. It’s about consumerism. But it’s a complete F-U to the region … I used that print to highlight the plight of something going on in the Middle East. For Vetements to use it in such a flippant and provocative manner; I don’t think they realise what these words mean to us Arabs.”

Some have pointed out that the Qasimi T-shirts, which are sold for £115, also in their way capitalise on the phrase. But others have defended the designer, saying his intentions were very different. In an interview with Wonderland a few years ago, he said: “I feel it’s important to discuss political issues, especially when coming from the Middle East. I use fashion as a medium to have a discourse and exchange points of view. I always reference the Middle East alongside other inspirations, be it politics, architecture or contemporary art.”

For all of her criticism of the Vetements T-shirt, Seraqui de Buttafoco thinks it is good that people, “will know the story of what happened in Beirut and perhaps it will give them the idea to go and buy books and understand.”