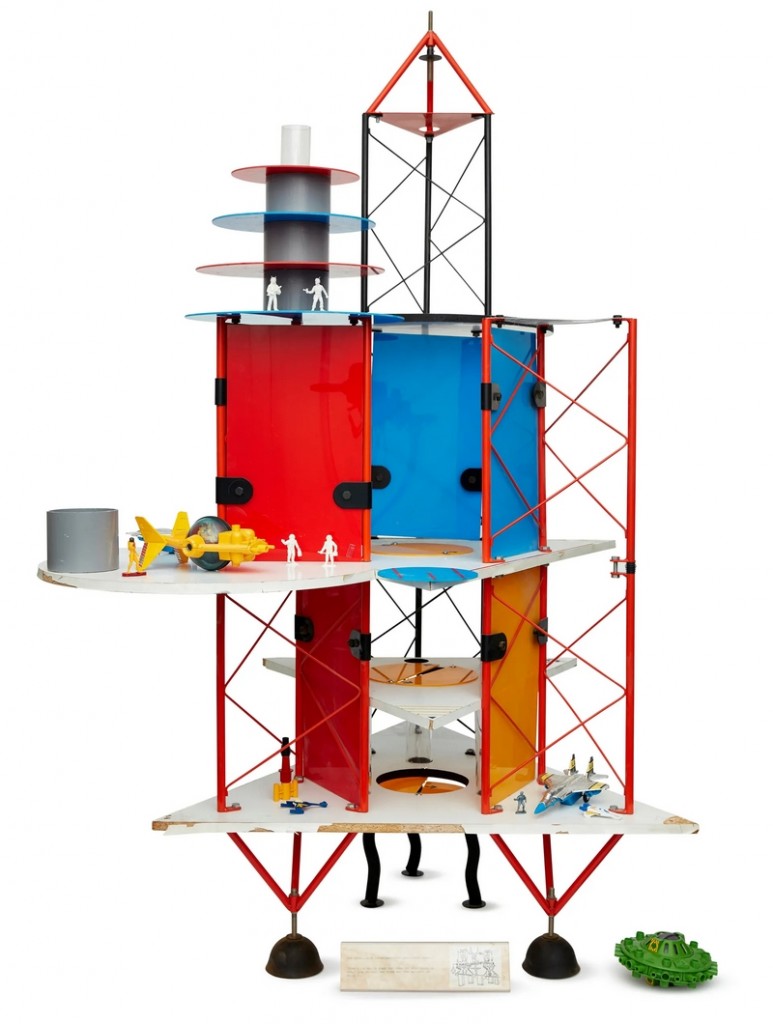 This article titled “Doll’s house by architect of MI6 HQ up for auction” was written by Robert Booth, for The Guardian on Friday 30th November 2018 06.00 UTC

A doll’s house designed in 1981 by Sir Terry Farrell, the architect of the MI6 headquarters, partly to send up the hi-tech architectural style employed by his rivals Norman Foster and Richard Rogers, is to be auctioned.

The 176cm-tall structure is made up of angular platforms, escape hatches and landing pads and features space toys and figures. It was inspired by a sketch by Farrell’s son Max, then eight, who suggested a “space city”.

It was commissioned as part of a competition among 300 architects to design a new style of doll’s house. At the time Farrell was designing the new TV-Am headquarters in London, which featured pop art-style giant egg cups. He would go on to become one of the leading figures in the boom in British architecture, designing Charing Cross railway station as well as the spy HQ on the Thames.

The doll’s house was auctioned off immediately and has been languishing in a loft after the grandchild it was bought for grew up and lost interest. It is expected to fetch about £1,000 in a sale of 20th-century art and design at the auction house Roseberys.

In 1981 he wrote of the design: “I found it amusing to explore the child’s view of hi-tech as so many built expressions of high technology seem to have been done by architects who are acting out suppressed childhood fantasies.”

He said it was “a manifesto piece for us as we hadn’t closed the door on any way of seeing and doing things and [it] was demonstrating tolerance and populism in that we were willing to take into account the client’s wishes and taste (8-yr-old Max)!”

Max, who is now in his 40s and a partner in Farrell’s architectural practice, said seeing the auction catalogue brought back a lot of memories. He is now the father of a two-year-old daughter and, with Christmas coming, hinted he would consider bidding, perhaps to reunite his family with the giant toy.

“It’s tempting,” he said, before adding that he would have to check at home first.