BMW will introduce the next generation of head lights 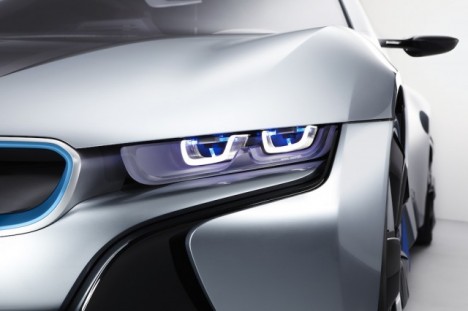 After LED technology, laser light is the next logical step in car light development. BMW engineers are currently already working on the introduction of laser light as a further pioneering technology for series production within a few years. Laser light could then facilitate entirely new light functions for even more safety and comfort and at the same time contribute significantly through its higher degree of efficiency towards a saving in energy and fuel respectively.

By definition, laser lighting is radically different from sunlight, and also from the various types of artificial lighting in common use today. For a start, laser lighting is monochromatic, which means that the light waves all have the same length. And it is also what is known as a “coherent” light source, which means that its waves have a constant phase difference.  As a result, laser lighting can produce a near-parallel beam with an intensity a thousand times greater than that of conventional LEDs. In vehicle headlights, these characteristics can be used to implement entirely new functions. Also, the high inherent efficiency of laser lighting means that laser headlights have less than half the energy consumption of LED headlights. Simply put, laser headlights save fuel.

The intensity of laser light poses no possible risks to humans, animals or wildlife when used in car lighting. Amongst other things, this is because the light is not emitted directly, but is first converted into a form that is suitable for use in road traffic. The resulting light is very bright and white. It is also very pleasant to the eye and has a very low energy consumption.

The next-generation of the BMW headlights are still a “few years” from going into production. The first vehicle that will sport laser beams will reportedly be the consumer version of their i8 concept car.