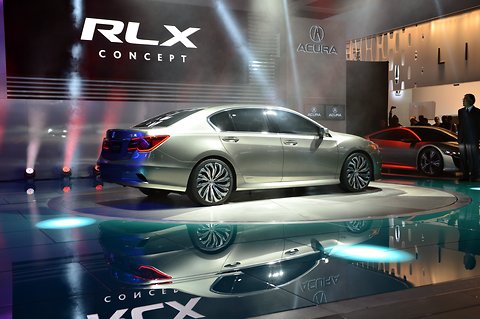 The builder said about its new model, that “RLX Concept delivers the interior space of a large luxury sedan with the footprint and agility of a midsize luxury sedan”. The RLX Concept‘s all-new 3.5L direct-injected VTEC V-6 engine and Sport Hybrid SH-AWD system, with three electric motors, combine to generate more than 370-horsepower, and are paired with a 7-speed dual clutch transmission (DCT) and lightweight body to deliver V-8 acceleration with four-cylinder fuel economy—with an estimated EPA (city/highway/combined) rating of 30/30/30 mpg.

“We have created a true luxury sedan based on our Acura DNA,” said American Honda president & CEO, Tetsuo Iwamura. “This means achieving advanced performance through engineering efficiency to create a unique synergy between the vehicle and its driver. Inside and out, on the open road or city streets, the sophisticated and elegant Acura RLX will offer a level of connectivity, comfort and advanced performance demanded by today’s luxury buyers.”

Acura also announced that the production RLX will be offered in a 310-horsepower, front-wheel -drive version, which will also deliver superior handling performance through the application of another new Acura technology— Precision All Wheel Steer.

Following the introduction of the production versions of the more powerful and fuel-efficient 2013 RDX in March, and the all-new 2013 Acura ILX and ILX Hybrid sedans in May, the production RLX will launch in early 2013. The next-generation Acura NSX, being developed by Honda R&D Americas in the U.S., will be produced in Ohio.

Acura is projecting an annual sales volume of 180,000 vehicles for the brand in 2012, which would represent a nearly 50 percent increase over 2011 sales results.